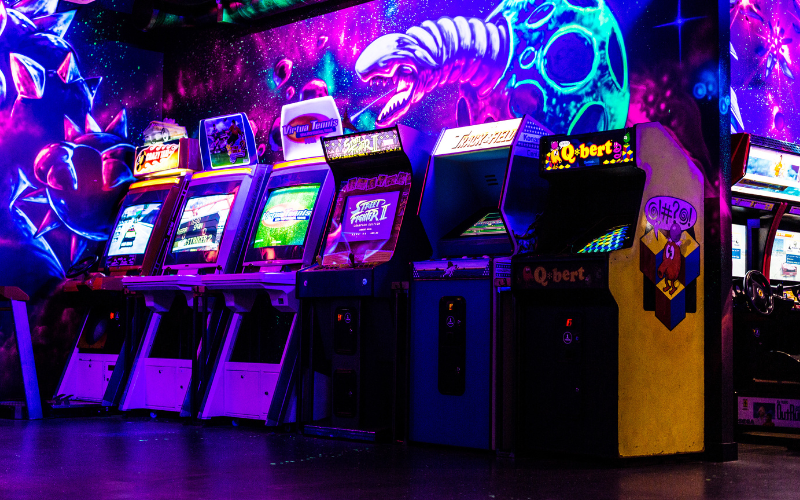 There’s nothing wrong with a little friendly competition, right? If your idea of a good time is battling your friends on Dance Dance Revolution or leaving them for dust on Mario Kart, then arcade bar NQ64 is the place for you. Founded in Manchester and now with locations in Birmingham, Cardiff, Glasgow, Edinburgh, Liverpool, Newcastle and London, the neon-splattered NQ64 is packed with pinball machines, classic consoles and retro arcade games including Tekken, Crazy Taxi, Pac-Man, Time Crisis, Guitar Hero and more.

Once you’ve been crowned champion (or you need a break from getting battered game after game), head to the NQ64 bar for gaming-themed cocktails like the Final Fantarita (with tequila, sour cherry & Fanta), the Dr. Ro Bev Nik (with Jack Daniels, cherry bourbon, & Dr Pepper syrup), and the Crash Bandicoot-inspired Aku Aku Fruit Punch (with Mount Gay Eclipse, pineapple rum, peach, banana, apple & Refresher syrup), and old-school hip-hop and R&B on the stereo.

NQ64 have just added seven new game-inspired cocktails to their menu, so to celebrate, we’ve teamed up with them to give away a £200 gift voucher, which can be used on both drinks and games across all of their locations. If that’s one competition you defo want to win, here’s how to get involved.