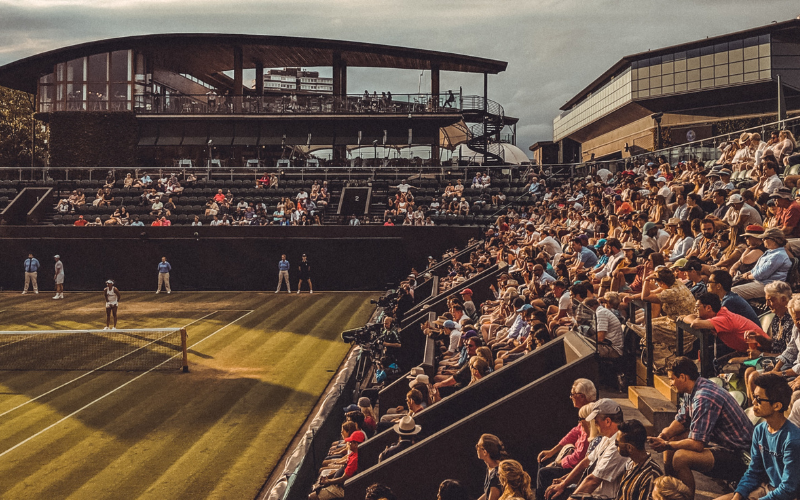 Game, set & match! Yes, Wimbledon is back, running from 27th June to 10th July. If you didn’t manage to nab tickets for Centre Court, fear not, because we’ve rounded up the best places to watch the tennis and (hopefully) catch a few rays too.

Watch the tennis for free from one of the deck chairs (you can also see the screen from the terraces of Morena and Jones Family Kitchen) in the courtyard of Eccleston Yards. The Amie Wine Studio outdoor lounge will be providing drinks, so you can watch the tennis with a glass of wine.

Catch the semi-finals and finals on the screen at Duke of York Square, set up on the running track next to the Saatchi Gallery. Partridges’ pop-up bar will be returning and serving champers as well as picnic hampers, or you can head to the pop-up stall to enjoy a Wimbledon classic, strawberries and cream.

Catch the tennis in this hidden – and FREE – little spot just around the corner from Selfridges. Pull up a deck chair and kick back whilst you watch the players in action, with all the on-court action being shown from 11am – 8pm every day of the tournament. There’ll also be food and drink provided by Stripes, including an Amalfi Coast-inspired menu, gelato, strawberries and cream, and an aperitivo cocktail list.

As well as installing a big screen on their terrace so you can catch all the tennis action, Bluebird will be serving a spesh dessert – a strawberry cake with pistachio, dacquoise biscuit, vanilla pistachio cream and fresh strawberry – that looks like a tennis court and a fresh gin-based cocktail.

London Bridge’s FREE summer festival will be showing all the big Wimbledon matches on their screen at The Scoop. It’s first-come, first-served so get down early if you want to secure a spot, and then keep yourself fed and watered with Mediterranean food and drink from the Riverside Terrace Bar or tacos and tequila at Taqueria Garcia.

Enjoy Wimbledon by the river at The Refinery Bankside’s terrace, which will be kitted out with deckchairs and a huge HD screen, and paired with all the Pimm’s, bubbles and strawberry desserts you could ask for.

Get close to the action at The Dog & Fox in Wimbledon Village, which will be screening every game live on TVs throughout the pub and a large projector. Enjoy some drinks while watching the tennis, or head outside to the sun-soaked terrace with a gin spritz or a Pimms.

Summer in the Square is back at Marylebone’s Portman Square Gardens, meaning that from the 5th to the 10th of July, you can lounge here for FREE on a deck chair while watching Wimbledon matches on the big screen. And to make it even better, there’ll be a bar stocked by Philglas & Swiggot and food provided by Chotto Matte and Wulf & Lamb.

This year, Covent Garden’s Piazza will be decorated specially for Wimbledon with deck chairs, picnic tables, bunting and flowers. You’ll be able to catch matches daily on the large screen while sipping on Pimm’s provided by the pop-up bar, then shop the Wimbledon capsule collection at Ralph Lauren or head to Mariage Freres for their Wimbledon-inspired tennis ball dessert to really get in the spirit.

The Canal at King’s Cross

Everyman’s open-air cinema is back for 2022, and it’s bringing sun-drenched Wimbledon screenings with it. Chill by the canal on a lounger or beanbag with some of Ruby Violet’s spesh strawberries and cream ice cream or any of the food, wine and cocktails from the Everyman menu. Seats are first come first serve, so get there earlier to nab the best spot.

Looking for somewhere to decompress away from buzzy Piccadilly Circus? Head round the corner this summer to St James’s Market and take a seat at one of the free deck chairs to watch some Wimbledon matches on the big screen. No need to book, this spot is free for spontaneous spectating. Plus, there are plenty of bars, restaurants and terraces to enjoy while you’re there.

If you’re out and about in London Bridge and want to catch some the tennis, head for Vinegar Yard. The outdoor screen in The Courtyard will be showing the matches and you’ll be able to cheer on your faves with Barcadi cocktails and pizza from Bad Boy Pizza Society in hand.