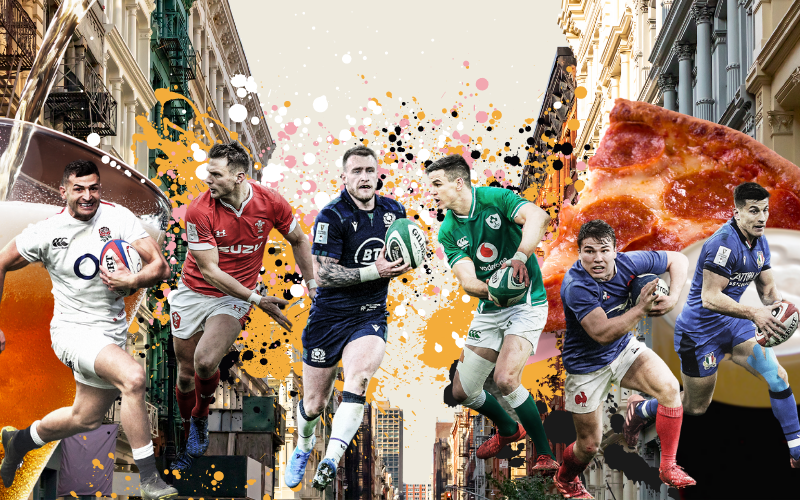 The Six Nations is back for 2022, running from 5th February – 19th March, and with England second faves to lift the trophy behind France, it’s set to be another thrilling tournament. This year spectators will be allowed back into the stadiums, but if you haven’t got tickets and don’t want to miss a single kick, tackle or scrum, here are the best places to watch the Six Nations. And if you fancy a little friendly competition with your mates whilst you’re at it, make sure you join LOTI A.M.C too.

Five Points’ shiny new Hackney taproom will be showing all the Six Nations matches this year, and yes that means if there’s a game on a Sunday they’ll be open. You’ll be able to watch all the action whilst sipping on tank-fresh beer piped in directly from the brewery, with Five Points faves and guest brews on tap, and they’ll also be slinging ACE Pizzas to keep you going too. Book now to guarantee a good spot in front of the screen.

After doing one for the Euros last year, 4TheFans is launching London’s first rugby fan park at Oval Space for the Six Nations. The venue will be decked out with huge anti-glare screens, a world class sound system, lighting, and live bands to create that big game atmosphere – you even get a drink and a pie included with each ticket for that proper stadium experience. There’ll also be an appearance and analysis from rugby legends like Andy Goode and Dean Richards on each match day, as well as competitions, giveaways, and plenty of food and booze to keep you entertained in between every kick.

Flat Iron Square always put on epic sports screenings and they’re doing exactly that for the Six Nations. All of the games will be shown on their huge garden screen as well as other wide screens dotted around the venue so you won’t miss any of the action. And you can’t watch a match without anything to eat or drink, so Flat Iron Square’s bars will pouring the bevs and the resident food traders will be dishing up the grub.

As Clapham’s oldest drinking den, it only makes sense that the Rose & Crown is getting in on the Six Nations action. They’ll be celebrating with a menu of pub classics including the likes of pork & black pudding scotch egg with apple ketchup; BBQ rib croquettes with black garlic; and venison steak with smoked hash brown, as well as real ales and craft beers on tap too. Sounds like a winner.

Brigadiers is going big for the Six Nations, screening all the games and running their Saturday Sports Menu, featuring the likes of goat belly vindaloo samosas, masala fries, Brigadiers butter chicken burger and bottomless bevs. They’ve got spesh Guinness cocktials on for the occasion too and have even converted their vending machines to stock the black stuff. You can book into the Blighters bar area or if you’ve got a crowd with you, one of their private dining rooms.

With giant HD screens dotted throughout the venue, you’re sure to get a good view of every single Six Nations game at Victoria sports bar Greenwood. And with beers, cocktails, wines, gins, burgers, pizzas and more on the food and drink menu, you’ll be well fed and watered too.

Can’t get into Twickenham to watch the match? The Cabbage Patch is the nest best thing. The famous memorabilia-filled rugby pub is close to the stadium, so you can guarantee an unbeatable atmosphere when England are playing – that can mean big crowds but the large beer garden and outdoor bar on international rugby days mean there’s enough space for everyone.

Pergola Paddington will be decked out with big screens for the Six Nations so there’ll be plenty of space for you to catch all the action, and with the resident bars and restaurants keeping the food and drinks (yes there’ll be plenty of Guinness) flowing, you can make a real day of it. You can book if you want to guarantee a spot but walk-ins are welcome.

Boxpark always goes big for its sports screenings and this year’s Six Nations is no different. All the games will be screened at both Wembley and Croydon, with plenty of pre-match entertainment; appearances from rugby legends like David Strettle, Delon Armitage, Max Lahiff, Martin Offiah, and Freddie Tuilagi; and some of the best street food in the biz from the resident traders.

With a huge projector screen in its event space and more TVs dotted around the beer hall, Truman’s Social Club has every Six Nations angle covered. And with a menu that spans brunch to pizza and a line-up of 20 beers on the bar, they’ve got the refreshments covered too.

Richard Corrigan’s bar Gibney’s, in the basement of his Daffodil Mulligan restaurant, is showing the rugby, which you can watch with a few pints of Gibney’s Stout and salt chilli fried chicken and Durrus rarebit with stout pickled onions. If you want a guaranteed front row seat, bag a private booth complete with their own screens.

After screening the Euros last year, Vinegar Yard is welcoming fans back to The Courtyard for the Six Nations with all the games being shown on one of the biggest screens in town. As well as watching the games at the heated and covered bar, you’ll be able to tuck into food from Bad Boys Pizza Society, who are slinging a spesh England Margs pizza in support of the team. General admission tickets are free or you can get a £6 ticket, which includes seating and a pint.

If Beavertown is your beer of choice, head to their Tottenham pub the Corner Pin to watch the rugby. As well as all the Beavertown faves on tap and the likes of macaroni cheese bites, brisket croquettes with roast garlic mayo and Nitro Stout IPA battered fish & chips on the food menu, the pub has three screens (including in the garden) and a top sound system so you won’t miss any of the action.