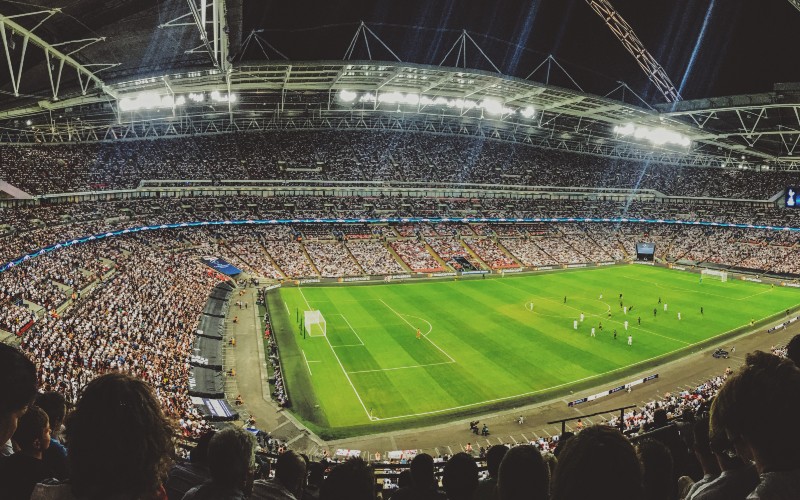 Considering how disappointing it can be to be an England fan, we’ve actually had a decent couple of years when it comes to international football – the lads made it to the final of the Euros last year and the Lionesses went one better and won the thing this summer. All of that means there’s a sense of optimism in the air for this year’s World Cup, even if it is happening in the desert and in the middle of winter. Is football coming home? We’ll have to wait and see, which you can do at the best places to watch the World Cup. And if you fancy having some bants with your mates whilst you’re at it, make sure you join LOTI A.M.C too, where you can predict the outcomes of the games and be in with a chance to watch the World Cup final at some of the venues we’ve featured below. IT’S COMING HOME.

Skylight in Tobacco Dock is making sure there’s room for everyone to catch the matches by opening what will be the biggest sports bar in the UK on level 2 of the Grade I-listed warehouse space. With a capacity of 500 and full weather-proofing throughout, Pitchside will not only be screening every single game of the tournament, it’ll be the ultimate fan zone, with a player’s tunnel on entry, a top-notch sound system and five cinematic LED screens over 5 metres long, ensuring every seat will have a view of the action. As well as being entertained by the skills on the pitch, Pitchside will also have live hosts, half-time and post-match DJs, and bars pouring drinks until 1am to really up the stadium vibes.

The UK’s biggest beer hall will be screening every game of the World Cup, with two massive HD screens inside and room for 1400 football fans. There’ll be a whopping 98 beer taps on at the bar and World Cup food platters to tuck into during the matches. And on England gamedays, you can expect live performances and DJs both before and after kick-off to really up the atmosphere.

Football’s coming home this winter and you can watch it happen at Flat Iron Square, which was one of the places to watch the World Cup in 2018. The Borough venue is screening all the games from the World Cup, with screens outdoors (with newly installed roof covering) and inside the taproom. Obviously you can’t watch a game without anything to eat and drink, so Flat Iron Square’s bars will be pouring the bevs and resident food traders like Gamekeeper, Good Slice and Lil’Watan will be keeping you well fed.

4TheFans are hosting a fan park so that us Londoners can celebrate the World Cup together. Dalston Roof Park is being kitted out with huge anti-glare screens and a world-class sound system to create a genuine match-like atmosphere, with selected events even including a Sky Sports presenter and football legends. To get us even more excited, these events will also include live DJ sets, competitions and plenty of food and booze options. General tickets also include a beer and a pie (for that authentic experience) plus there’s the option to go VIP.

After some epic World Cup screenings in 2018, Boxpark is getting back on it for 2022 with games being shown at the Shoreditch, Croydon and Wembley locations. You can catch all the action on the big HD screens and of course the resident Boxpark traders will be keeping you well fed and watered. Expect lots of entertainment and a few special guests joining to really up the matchday atmosphere.

Vinegar Yard will be putting the big screens back in for the World Cup, and the terrace will be covered and heated too. There’s gonna be plenty of food to tuck into, including the likes of Baba Gs, Nanny Bill’s and Nik’s Kitchen, with the bars serving up the all important drinks to celebrate the results with. You’ll need to book tickets for England games, which also include a free pint, and all other games will be walk-in.

As well as catching every kick at this Brixton spot on the two 11.5ft x 6.5 ft big screens, you can tuck into street food from the likes of Baba G’s, Halo Burger, Seekh Stop, and Share A Slice and drinks from ABV and Specialist Cellars.

This al fresco space on the canal in Hackney Wick is showing all the games in its Hanger Bar area whilst the main space will be turned into a dedicated World Cup venue exclusively screening the England games, with resident food traders on hand to keep you fed.

Multi-venue space Peckham Levels will be screening every World Cup match on various screens across levels 5 and 6 of the building. They’ve extended happy hour to apply to game days for the occasion, with £4 pints or glasses of wine and £5 Duppy rum punches, and there’ll be food from 081 Pizzeria, Green Choy, Plantain Kitchen and Boxwallah available too.

Market Halls are launching fan zones where you can catch live screenings of every game this World Cup season. The dedicated footy viewing areas will be decked out with huge HD screens and tabletop BrewDog beer kegs, there’ll be face painters on hand and if England wins a match, Market Halls will offer 100 pints for £1. Of course, you’ll also be able to dine on food from the in-house vendors, including the likes of Black Bear burger, Gopal’s Corner, Baoziin, Le Bab and Inamo Sukoshi.

Arcade Food Hall will screen all 64 World Cup matches across six large HD screens this year, plus they’ve got an exclusive World Cup menu. On game days, you can enjoy a range of sharing dishes, including guac & chips, BBQ butter masala chicken wings, crispy squid tareko, beef smash burgers, chicken shawarma wraps and waffle fries for £45 per person. As for drinks, choose from beer towers, jelly shots, and sharing jugs of cocktails such as Aperol spritzes and mojito. And if you want the ultimate experience, you can book a Games Room (for up to 40 people) which comes equipped with a private TV, a pool table, a Michter’s Old Fashioned cocktail machine and a self-pour beer keg.

Islington sports bar Valderrama’s, recently opened by James Cochran of 12:51, is transforming itself into a hub for World Cup action with projections, multiple screens and a state-of-the-art sound system, all to be paired with some of Cochran’s legendary Around the Cluck chicken burgers and Beavertown beers and cocktails.

JOIN LOTI A.M.C. AND GET THOSE GUESSES IN