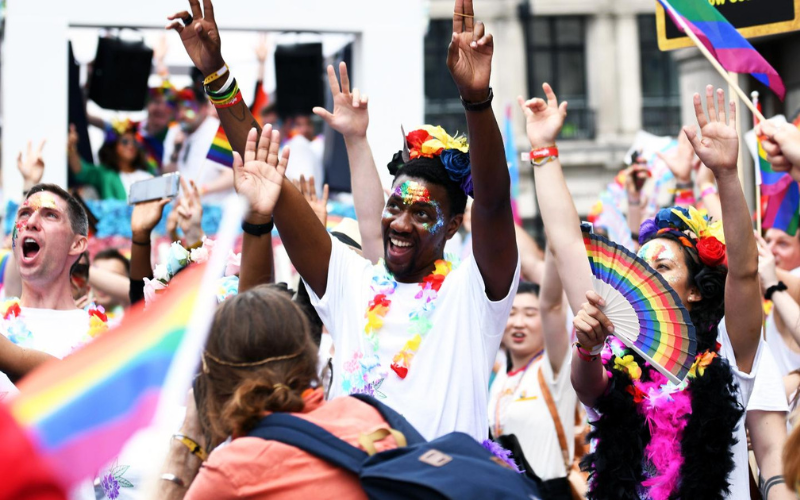 The Pride in London parade is FINALLY back in full force on 2nd July and with 2022 being the 50th anniversary of the first Pride in London parade, this year’s event is going to be extra special – it’s retracing the original route from Hyde Park Corner to Whitehall Place, passing by locations key to the LGBT+ movement in this country. If you’re heading out to catch it, here are the best places to eat and drink along the parade route.

BiBi – BiBi is an exciting Indian spot from the same group (JKS) that brought us BAO, Gymkhana, Hoppers and Berenjak, among others. It’s headed up by chef Chet Sharma, whose Michelin-starred resume includes Moor Hall and L’Enclume, with a menu of clever hits divided between the categories of snacks, chaat, sigree, sides and desserts.

Cafe Biltmore – Located in the Biltmore Hotel in Mayfair, Cafe Biltmore is a great brunch spot that’s handily just round the corner from where the parade route begins. Michelin-starred chef Jason Atherton is behind the menu of brunch classics and, on Saturdays, their bottomless option will get you 90 minutes of free-flowing mimosas, bloody marys or bubbles for £39 per head.

Kol – This fine dining restaurant goes by the tagline ‘Mexican soul, British ingredients’, summing up the menu of inventive dishes that draw on Mexican tradition and are pulled off using the best in local ingredients. Kol also serves up a list of biodynamic wine, mezcals, tequila and some lesser-known Mexican spirits.

Fallow – With sustainability at its heart, Fallow cooks up a modern British menu that’s far from the ordinary – think parfait made with mushrooms from the restaurant’s basement and sourdough soft serve made with surplus bread.

Market Hall – Oxford Street’s Market Hall has put together a selection of Pride-inspired food and drink which will be available from 27th June to 10th July. Among them will be Pasta Evangelists’ Pink Beetroot Infused Radiatori with Fresh Basil Pesto; Inamo Sukoshi’s rainbow sushi roll; and a Taste the Rainbow colourful layered vodka cocktail (£1 from each cocktail served will go towards Mind Out charity for LGBTQ+ people by LGBTQ+ people).

Arcade Food Hall – Arcade Food Hall will function as a welcome pit stop for parade-goers, with two spesh cocktails inspired by RuPaul’s famous catchphrases, the C. U. N. T. (Charisma, Uniqueness, Nerve & Talent) and How’s Your Head?, a hot food Pick Up with everything from smash burgers to barbecue butter chicken wings AND a surprise celebrity DJ on the decks.

Kiln – As the name suggests, a large portion of Kiln’s rustic Thai food is cooked over an open fire. The menu showcases authentic techniques and full-throttle flavours and is consistently award-winning, with Kiln being rated as one of the top 20 restaurants in the UK by the National Restaurant Awards this year.

Duke of Wellington – The Duke of Wellington serves as a Soho local to the LGBTQ+ community, a classic British pub – so you know what you’re getting – that’s super friendly and welcoming. To celebrate the Pride Parade, the Welly is putting on an LGBTQ+ icons party and honouring the legends of the community, from Marsha P. Johnson to Beyoncé.

Mr Ji – Originally focused on Taiwanese chicken, Mr Ji’s got a total menu revamp with the help of TATA Eatery and broader East Asian flavours in 2020 which solidified its rep as one of Soho’s best. From 28th June – 3rd July, Mr Ji is doing a sausage in a pink bun special alongside a purple version of its lime leaf margarita, and on parade day, the team will be outside with ready-to-drink cocktails, beers and buns.

Admiral Duncan – The historic Admiral Duncan is one of Soho’s oldest gay pubs. On the evening after the Pride Parade, they’ll be holding a cabaret, hosted by drag queen Wilma Ballsdrop.

She Soho – Soho’s only exclusive lesbian bar, She is a modern venue for women, non-binary folk and their male guests. With regular club nights, comedy, cabaret and drag king performances, you can rest assured that this will be a solid after-Pride party spot.

Thunderbird – If you’re after something quick and delicious post-parade, head to Thunderbird for some of their award-winning Chipuffalo wings (a mix of buffalo, chipotle, coriander and pickled celery with blue cheese dip), salted caramel wings, Thunderbun chicken burgers, and loaded fries.

Panton Yokocho – If you find yourself at the end of the day needing ramen and needing it now, you won’t be too far away from killer ramen bar Panton Yokocho. Go for the huge menu of ramen, hirata buns, gyoza, sushi and cocktails; stay for the retro vibes, neon signs and Japanese pop soundtrack.