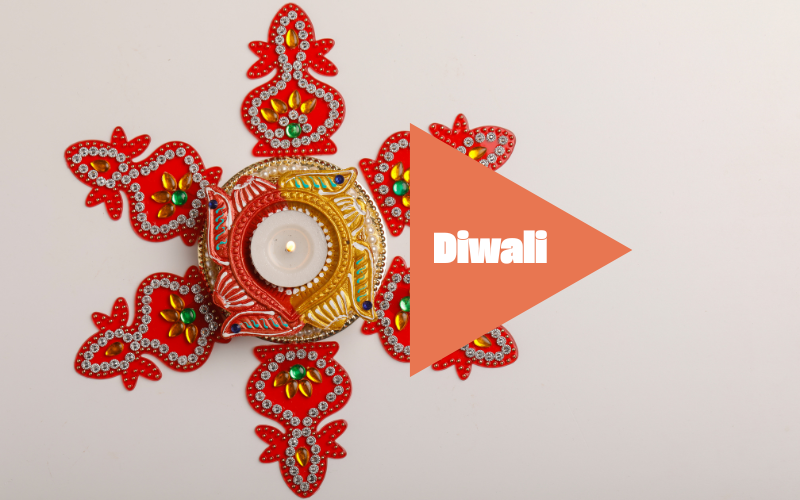 Every autumn, Diwali (also known as the festival of lights) symbolises the triumph of goodness and light over evil and darkness, as celebrators illuminate darker evenings with lanterns and diyas and share warming feasts made up of a number of courses. This year, the main event of the five-day celebration falls on Monday 24th October, but celebrations are running throughout the whole month. From outstanding limited-time menus to spectacular live performances, here’s how to get involved in the Diwali festivities in London this year.

Kricket White City are celebrating Diwali with a special vegetarian Thali menu designed by Chef Patron Will Bowlby, which will be available for one night only this October. The meal will kick off with plates of chevda and papads served with three chutneys (date & tamarind, green chilli & coriander and confit garlic & chilli), followed by Jerusalem artichoke gujiya, leek and potato samosa, Delica pumpkin kachori and drown butter laccha paratha. To finish, there’ll be traditional Indian sweets including gulab jamun and pumpkin ka halwa.

TreeHouse@51’s Diwali menu will be available throughout the whole of October, with a selection of Thalis that represent four diverse corners of India – north, south, east and west. You’ll be able to choose from non-vegetarian Thalis (such as Murgh Tikka Makhanwala and Eratchi Melagu Roast) or vegetarian Thalis (Plangshager Chorchori and Methi Mattar Malai).

Dishoom is back with another edition of their spectacular Diwali parties. For one night only, they’ll be taking over Studio Spaces in Wapping with an evening of poetry, live music and dance performances curated with the help of renowned artistic director and creative producer Sweety Kapoor. Of course, there’ll be food too, with dishes including jackfruit biryani, mattar paneer, Dishoom house chaat, and mushroom pepper fry. Plus, there’ll be snacks from Jhal Muri Express, moong mal dosas and chaat from Horn OK Please! and all guests will receive free chai and mithai along with their ticket.

Atul Kochhar’s Diwali menu at Kanishka will be available at the start of November, a set menu of three courses for £47. Starters will include maska pao bhaji, picalilli and baby onions and spice grilled grouse and beetroot ketchup, followed by mains like tandoori cauliflower and almond korma and achari duck biryani, quail egg, blackberry raita beetroot and thyme dumpling, yoghurt gravy. Then, for dessert, there’ll be a mithai trio of gulab jamun cheesecake, pumpkin cinnamon halwa and malai kulfi.

Diwali Family Celebration Day at the Museum of the Home

The Museum of the Home is putting on a day of celebrations, including sustainable lantern making, diya decorating, Bollywood dancing and rangoli designing. Later on, there’ll be a feast of hot vegan food and chai tea before major light installations in the gardens and on the facade are turned on. And, the following week, the rangoli, diyas and lanterns will be displayed at the museum.

Both The Cinnamon Club and Cinnamon Kitchen City are releasing celebratory Diwali menus, as well as a meal kit to make your own four-course feast at home. At Cinnamon Kitchen City, you can try the nine-course sharing menu for just £42 per person, as well as a special cocktail, and at The Cinnamon Club, there’ll be a five-course sharing menu at £65 which will start with canapes, moving onto mains and finishing with a trio of sweet treats, coffee and petit fours. And if you want to make your own Diwali meal at home, you can grab their box of marinated meats and seafood with Bengali beetroot cake and Bhel papdi chaat with a mango shrikhand for pudding which serves four for £140.

The hot new South Asian spot in a revived pub Tamil Prince will be serving up a Deepavali (the term for Diwali commonly used in the southern Indian states) feasting menu for one night only. Full of dishes traditionally served during the festivities, the menu will include the likes of Prawn Peratal, a dry curry made with fresh turmeric paste, and Chettinadu Mutton Masala, a classic dish from South India, as well as veggie options. The dinner is not bookable, but you can drop by any time from midday until 10pm to try the menu, which is priced at will be £25 per head for the vegetarian feast and £28 for meat.

Gymkhana is celebrating with a limited-time Diwali Tasting Menu (£110 per head) and Vegetarian Tasting men (£100 per head) both created by Executive Chef Sid Ajuha. The five-course menu will feature a selection of sharing plates, including Amritsari Pink Shrimps & Queenies with Dill Raita, Kid Goat Methi Keema with Salli & Pao and Kesari Kalmi Kebab, Mint & Mustard Chutney and a Saffron Pistachio Kulfi Falooda or Gulab Jamun Crumble and Cardamom Basundi for dessert. You can choose to pair the meal with a curated selection of wines for an additional £95.

Over at Trishna, you can choose between the Celebratory Feast (£90 per head) or the Vegetarian Diwali Menu (£85 per head). Dishes will include the likes of Nariyal Scallops, Hariyali Bream, Duck Chutney Seekh, Cashew & Pepper Chicken and Chocolate Chikki, Fig & Cardamom Kheer for dessert, and you can get wine pairing for an extra £80. Plus, a special cocktail, Gende Ka Phool, named after the marigold flower and made with Johnnie Walker Black Label, coconut, saffron & lemon, will also be available.

Brigadiers are bringing out a Diwali feast of their classics alongside limited-time specials designed to be shared with friends. Priced at £85 per head, the menu will include the likes of Pappadums & Chutneys, Achari Chicken Skins & Benarasi Samosa Chaat served alongside Smoked Pumpkin Thepla, Original BBQ Butter Chicken Wings, Amritsari Fried Fish Paos and Apple Jalebi.

DELLI, the new app-based food marketplace and community, has partnered with five independent makers to drop some brilliant, traditional Indian recipes in celebration of Diwali. Indian snack makers Chai and Spice are bringing a selection of barfi (AKA Indian fudge), Alec Tewari (Chai Time) has created a bundle of Royal Indian sweets such as Kheer, Pooye and Pakodi, Biskut Bar have a limited edition tin full of the vegan treats Haldi Dudh, Bourbon Biskt, Tutti Frutti Biskut and a Besan Ladoo Biskut, Heartfull have burfi truffles and masala nuts and Yesterday’s Curry have a kit to make Goan Dal at home.

Chef Rohit Ghai has put together two celebratory sharing menus, one for each of his London restaurants Manthan and Kutir. The menus will be slightly different at each site, but will both be collections of Rohit’s family recipes and dishes that will be included in his own celebration. Plus, some faves from both restaurants will make an appearance, including Aloo Tikki with Honey Yoghurt and Chicken Truffle Korma.