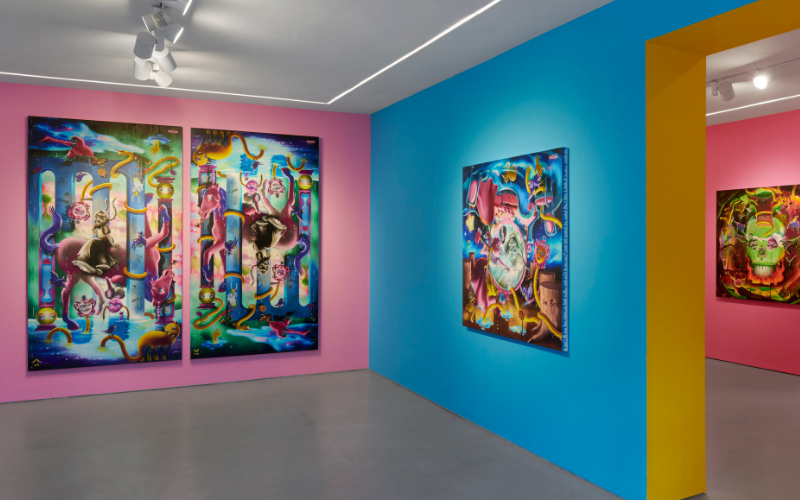 Known for her whimsical fantasy worlds and outlandish characters, Rachel Maclean’s That’s Not Mi! at Josh Lilley Gallery takes us one step further into the surreal. Three words to sum it all up? Disney-on-crack. And we love it! “Mirror mirror in my hand, who’s the cutest in the land?” Why, Mi, of course.

That’s Not Mi! takes a weird and wonderful, multi-medium dive into the journey of the bright-eyed, Disney-esque and rosy-cheeked Mimi, our loveable protagonist. The centrepiece of the exhibition is an animated short film showing Mimi’s trials and tribulations while in the woods. Gravity inverts as beauty-obsessed Mimi, who struggles with the concept of self-love, battles with her withered and grotesque counterpart (a ‘wizened crone’ who appears from underneath Mimi’s skirt), highlighting society’s fear and disdain towards getting old. Meanwhile a seemingly innocent hand mirror, which Mimi has been using as a vlogging device, attempts to assault Mimi, revealing itself to be a very dangerous, anxiety-inducing character in the plot.

Mimi’s perilous path and fraught state of mind is mirrored throughout the exhibition via striking paintings, tapestries and a 3D-printed sculpture. Again, much like Mimi’s experience in the woods, gravity pulls both ways within Maclean’s work, with each piece partnered to an inverted double, revealing new forms and faces. The film itself is displayed on an upside-down mirror in an upside-down room, complete with pink carpet on the ceiling.

Hidden behind the candy pink veneer and loud splashes of colour, That’s Not Mi! disguises disturbing themes of sexualisation, social media, our obsession with youth and beauty, as well as repulsive attitudes towards getting old. It’s unsettling and strange, but also enchanting and endearing, so it’s no surprise that the show has been extended for one week due to overwhelming demand.

See what other exhibitions are on in town right now right here.