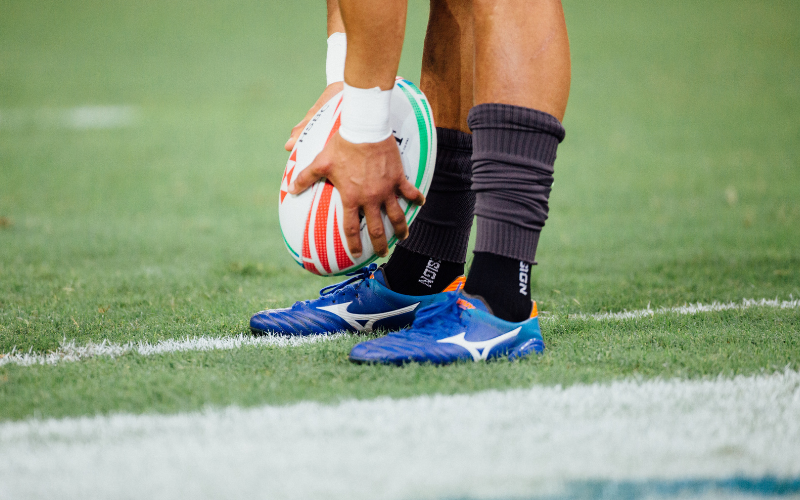 Like any sport, rugby has a lot of rules (yes there’s offside in this game too) but with 15 positions of the field, which require different skill sets and physical attributes, there’s a lot more specific vocab to wrap your head around. We’re here to help you brush up on your rugby lingo and sort your backs from your breakdowns and your locks from your line-outs, so you can impress your fellow Armchair Managers – don’t forget to join LOTI A.M.C if you haven’t already – and shout at the telly correctly.

Advantage – a decision given by the referee to keep the play flowing more freely. When a stoppage in play, like for a penalty kick, would deny the non-offending team an opportunity to score or gain territory, open play is continued instead.

Backs – one of the two main categories of playing positions. Backs wear shirt numbers 9 – 15. The backs are made up of full-back, wing, centre, fly-half and scrum-half players. These are the smaller but speedier members of the team.

Blood Replacement – if a player is visibly bleeding, they can be substituted for up to 15 minutes so they can receive treatment off the field.

Breakdown – the period of play immediately after a tackle and before a ruck, where players can compete for possession of the ball.

Conversion  – the kick at goal taken after a try is scored. If the ball goes over the crossbar and between the posts, the team is awarded two points.

Drop Kick – where the player drops the ball from their hands, bounces it on the ground and then kicks it.

Drop Goal – a drop kick that goes between the goal posts. This is what Jonny Wilkinson did to win the Rugby World Cup final against the Aussies in 2003.

Forwards – the other of the two main categories of playing positions. Forwards wear shirt numbers 1 – 8. The forwards are made up of flanker, number eight, lock, hooker and prop players, and these are the bigger, stronger players in the team.

Forward Pass – passes of the ball can only be made in a backwards direction. If a pass is deemed to be forward, a scrum will be awarded to the opposing team giving them possession of the ball.

Fly-Half – one of the backs positions, wearing number 10. Fly-halfs organise the back line and often choose what action to take after a scrum or a line-out. They are excellent kickers and are normally responsible for taking the team’s penalty kicks and conversions.

Full-back – one of the backs positions, wearing number 15, who often acts as a last line of defence by playing behind the back line. Full-backs often kick the ball long distances upfield to move their team’s play forward and catch high balls directed into their team’s half of the pitch.

Hooker – one of the forwards positions, wearing number 2. Hookers are the centre of the front row of the scrum and is responsible for trying to win possession in the scrum, as well as throwing the ball in from a line-out

Knock-On – a mishandling of the ball, like dropping it or rebounding it off a hand, that results in the ball travelling forwards. This results in a scrum being awarded to the opposing team.

Locks – two of the forwards positions, wearing numbers 4 and 5. Locks are typically the tallest in the team as they win the ball from line-outs and push forward in rucks and mauls.

Line-out – a throw-in from the side of the field. Players from each team line up parallel to each other, the ball is thrown down the middle of the line, and players are lifted up in an attempt to catch the ball and gain possession.

Maul – when the ball is off the ground and the player carrying the ball is held up but not tackled by an opponent and a teammate. A maul requires a minimum of three players but more can join from behind their teammates. The team in possession of the ball attempt to drive the opposition further back as well as moving the ball within the maul so it can eventually be passed to a player outside.

Number 8 – one of the forwards positions, wearing number 8 (duh). They secure the ball at the back of a scrum or a ruck, providing a link between the forwards and backs in open play.

Offload – a short, quick pass made by a player right before they get tackled and they hit the ground.

Offside – an offside position is when a player is further forward (so closer to the opposition’s goal line) than their teammate who is carrying the ball or who last played the ball. A player can be in an offside position but they cannot get involved in play until they’ve moved onside.

Penalty – a free kick awarded when a rule has been broken by the opposite team. It’s worth two points if the ball is kicked between the posts.

Ruck – when the ball is on the ground and two opposing players close around it. They use their feet to move the ball around until it passes behind the farthest foot back belonging to their team, at which point the ball can be picked up.

Scrum – a method of restarting play after there’s been an infringement of the rules. The eight forwards from each team bind together and push against each other, and the ball is thrown into the middle (by the scrum-half of the team who’s been awarded possession). The two hookers compete for the ball, hooking it back towards their side of the scrum. The ball can be kept in the scrum with that team pushing forward to drive the other side back down field and gain territory, or the ball can be moved to the back of the scrum and passed out back into open play.

Scrum-half – one of the backs positions, wearing number 9. The scrum-half is the link between the forwards and the backs and along with the fly-half, is responsible for making many of the tactical decisions during play. Scrum-halves are the players who receive the ball from the back of the scrum and decide how pass it onwards to move play on.

Sin Bin – aka the naughty step. This is where players who get shown a yellow card go and sit off the field for ten minutes.

TMO – television match official. This is the person who supports the referee with decisions that are difficult to make on the field – eg. if the referee cannot see clearly when a try has been scored – as the TMO has the ability to replay footage from various angles.

Try – the most important method of scoring points in a game. A try, worth five points, is awarded when a player places the ball with downward pressure over the goal line/try line.
See also: penalty try – this is awarded by the referee when it is deemed that one team was illegally prevented from scoring a try. A penalty try is seven points, as it automatically includes the conversion.

Turnover – when a team concedes possession of the ball, like at a breakdown, and it is turned over to the other team.

Wings – two of the backs positions, wearing numbers 11 and 14. Wingers, one on the left and one on the right, are fast and agile players who run and pass the ball at speed in the attempt to score tries.