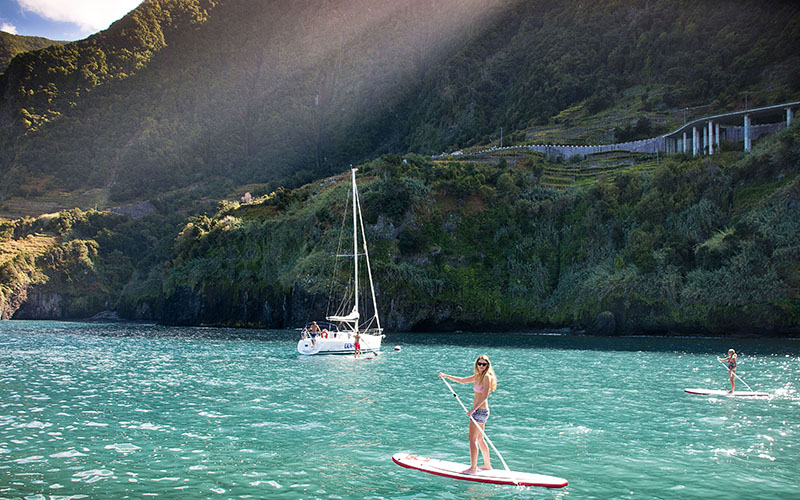 Getting away at the moment seems like an ever-closing window of opportunity but if you can sneak a trip in there, Madeira is the place to go. Full of dense green forests, volcanic mountains and beautiful coastlines, the unique island could very easily be the location for the next Jurassic Park movie. There may not be any dinosaurs but there’s plenty of sun, sea, nature and Portuguese culture to explore.

The flight time is around 3 hours(ish) from Gatwick and takes you to Funchal Airport on the island, which is around 1000km from mainland Portugal and 500km from Africa, meaning temperatures in the winter season are around 17 degrees. Not too bad eh? Arriving at the airport during COVID means everyone is tested and for free. This is a well organised and relatively quick operation – we got our results (COVID-free) back within 12 hours.

Our first glimpse of the island is the journey from the airport to the first of our two hotels, Pestana Quinta do Arco, and the drive reveals some extraordinary and dramatic landscapes. The winding roads up and down misty mountain tops give way to spectacular views of lush green, levadas (small irrigation canals), golden beaches, deep valleys and majestic hillsides. It’s stunningly beautiful.

Pestana Quinta do Arco is on Madeira’s north coast, with views of the Laurissilva Forest and the Atlantic Ocean. With two pools and cute rooms with their own kitchenettes and terraces (rates start at €57 a night), it’s a great spot. It’s also home to Jardim das Rosas, the largest rose garden in the world, with over 1,700 species of roses.

Our first Madeira adventure was a hike along Levada Do Rei. Levadas are like small canals and were introduced to bring water from the north to the southern part of the island back in the 16th century. At 5.3km long, the hike takes around three and a half hours and takes in some pretty spectacular views of the São Jorge and Santana farmlands below.

Here we are introduced to the native forest, dense with laurel trees and home to firecrest and chaffinch birds that we spot from time to time. Then there is, of course, the Madeira microclimate. Old Mother Nature has a field day with the conditions – we get rain, sun and amazing fog above the treetops. The trail features narrow walkways, low tunnels and even cuts directly under a waterfall.

After that, lunch at Quinta do Furao is well-earned. The hotel is right on a clifftop that looks out over an impressive part of the coast, with blue spanning as far as the eye can see and white-topped waves crashing against the sandy shore. We tuck into locally caught fish, including the famous black scabbard served with banana and passion fruit sauce. If you’ve not seen the fish before, it’s worth googling. We also sample the local Madeira wine – with a vineyard within the grounds of the hotel, it would be rude not to right?

A local family-run restaurant called Casa de Palha was the spot for dinner, which is very cosy and rustic. Here we tried some local homemade dishes to including the Bacalhau com natas, an oven-baked dish of salted cod and potato.

An early start the next day had us up before the sun. Even come 7:30 it still is impressively dark (we might have googled ‘time in Madeira now” out of fear our phone was lying to us). Along the coast at Porto Moniz we watched the ocean roar against the rocky shore as the sun raised its head. Then we hit the road, literally, on a jeep tour of the island taking us off-road and way up into the hills where the temperature dropped, the fog came up and the shorts we put on earlier seemed like a terrible mistake.

This was one of our favourite experiences of the entire trip because we got to see so many different sides to the island. The landscape really does change in dramatic style, shifting between damp woodland, lush green plantations, mountains, red dust roads, little villages, and towns of bright white buildings and terracotta roofs. And just about every patch of hillside seems to be sprouting banana trees.

After all morning in a jeep, lunch couldn’t come soon enough. This time it was at Hotel Ponta do Sol, another clifftop location with a restaurant overlooking the ocean and more locally sourced fish – it never gets boring. It was then a move to Quinta das Vinhas on the sunny south coast to spend the night. The main house dates back to the 17th century and features 15 cottages, two pools and acres of vineyards (rates start at €83 a night). Our room for the night was one of the apartment suites, which had a kitchenette, fire place, a balcony with a sea view and lots of homely touches.

Even with all that exploring we didn’t make it to the capital Funchal but if you’re planning to visit the island, there’s a few cultural events you’ll want to look out for. There’s the carnival in Feb/March where people dress up in disguise and parade around the town; the flower festival in April/May, with floats, floral carpets in the streets and shop fronts decorated with displays; the wine festival in August/Sept; and markets, street parties and fireworks at Christmas. Who’s ready to book a flight?

YOU CAN NOW PLAY BRANDS AGAINST HUMANITY (1)

THE BEST DELIVERIES FOR MOTHER’S DAY (1)