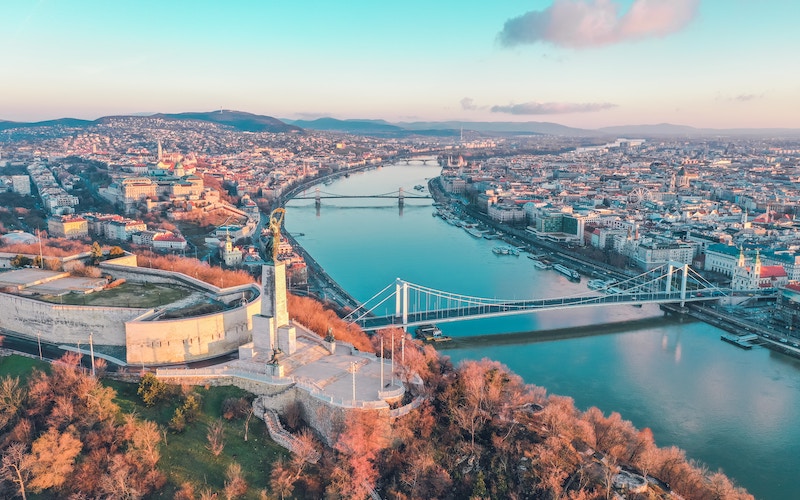 One of our favourite things about visiting somewhere new is trying out the local food and luckily Budapest is home to some pretty interesting specialities. The local delicacies we happened to try were amazing but calorific, so it’s a good job calories don’t count when you’re on holiday.

The Langos is a Hungarian speciality and is traditionally served as a large piece of fried dough smothered in sour cream and topped with plenty of cheese. This is the perfect hangover cure. Our favourite place to get these is Retro Langos Bute which has a huge menu of different toppings including sweet Langos.

Hungary is famous for its paprika and plays a big role in their cooking, including the Chicken Paprikash. The dish includes chicken in a paprika sour cream sauce served with Hungarian dumplings, Nokeldi. The dish is very popular in the city but if you’re looking for a good cheap and authentic Chicken Paprikash try basement restaurant Regos Vendeglo.

This one is for the sweet toothed. The Hungarian Chimney Cake gets its name from its chimney like shape and is a sugar baked, doughy but crispy pasty. Once cooked its inside is coated with a choice of sauce and filled with soft serve. The best place to grab one of these bad boys is Street Cakes.

Ruin bars are a big part of the city’s nightlife and first came around roughly 15 years ago. Clue’s in the name – these bars are based in old WW2 ruins in the inner part of the VII District.

First starting out in 2002, Szimpla Kert’s main aim was to sell affordable drinks to the young and creative crowd of Budapest. This was the city’s first Ruin bar and has now become one of its most famous. The site itself is pretty big, with six different bars spread across the Ruin, serving over 400 types of drinks – plenty to keep you going all night.

Located in downtown Budapest, Akvarium is one of the biggest terraces in the city. This place is busiest in summer, with both locals and tourists enjoying drinks on the green. Our tip would be to dip your feet in their huge paddling pool whilst enjoying your drink, heaven after a long day sightseeing.

Another Ruin bar in Budapest you should check out is Instant & Fogas. Based in an old warehouse the venue is huge and separated into seven areas. These rooms play different genres of music, including R&B, techno and heavy metal, meaning there’s something in there for everyone. The club closes at 6:00am so if you like to party all night then add this to your list.

The city is full of amazing history and architecture, including Buda Castle, Fisherman’s Bastion & the Parliament building. Located either side of the river, we’d recommend getting a boat tour at night to see the buildings lit up.

Budapest is famous for its Thermal Baths and there’s quite a few of them dotted around the city. As we visited in summer we decided to check out the Szechenyi baths, which are both inside and outside. We were surprised at how big the baths are, with loads of pools of different temperatures and sizes. There’s even a pool party on a Saturday night.

If you’re looking for a bit of greenery in the city spend a morning or afternoon wandering or cycling around Margaret Island. Located north of the city by the river, the park also has its own lido and huge water fountain. Make sure you watch its water display which is choreographed to music.

If you’re looking for a hotel with a prime location then check out Radisson Blu Beke hotel. The hotel is located in the city centre in the Terezvaros region, a short walk from the parliament building. Their huge breakfast buffet serves continental food as well as local delicacies, which we filled up on ready for a day of sightseeing.