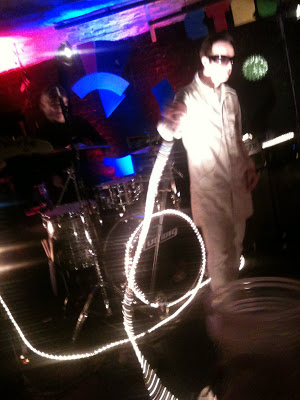 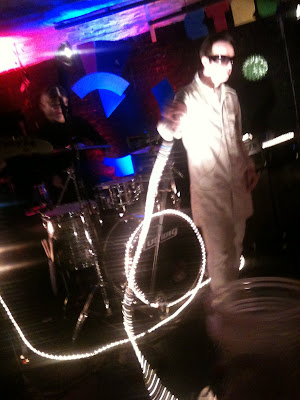 Glasvegas kicked things off proper with ‘The World is Yours’ who after a slight reinvention seemed to have adopted a very ‘U2’ persona. James Allan dressed all in white in military style trench coat, bono style sunglasses and adidas trainers, a look that to be frank was horrendous. The sound however was great. Even if Mr Allan’s movements with the microphone seem a little weird. The tube lighting from his microphone looked cool and ran along the amps taking the eye away from the offending trainers.

Ryan’s second choice was LondOnTheInside’ favourite gloomy popsters Veronica Falls who played ‘Fountain’ and the rather catchy ‘Found Love in a Graveyard’.

Ending the night Glasvegas played their current single ‘Euphoria Take my Hand‘ filling the room with an enormous atmospheric sound, pounding bass and upbeat drums. James Allan dropped the trench coat for this track to reveal a homemade ‘I Love Edwyn Collins’ vest. Some very good performaces from some very different bands. A cracking start to the weekend!