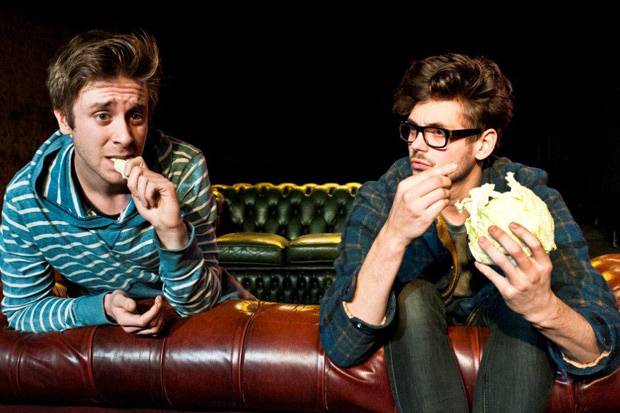 Top Story is an apocalyptic comedy written by Sebastian Michael which opens at the Old Vic Tunnels this week. We went down to check it out and firstly we have to say, we LOVED the venue. The dark of the basement together with the open brick walls and the sound of the trains passing through Waterloo station above creates a great atmosphere for any performance, not least one which is based on the destruction of the world as we know it!

For the performance, you should picture the scene….as you turn on the TV you are hit with the news that a giant meteor with the power to wipe out the entire human race is heading for LA and you now have to decide how you will spend your final days. OK so eating a raw cabbage and playing chess may not spring to mind as the most exhilarating of activates to peruse but for two students Talfryn and Gus, who’s experience forms the basis of the play, that’s pretty much how it pans out.

Watch on as the guys, who reminded us of our younger brother’s geeky geology mates, ponder over the meaning of the life and with a comedic twist consider how two humble tax dodging students can make their mark on humanity! Bringing a bit of glam to the show Chrissie Craven, the sassy news reporter, provides updates on the status of the meteor and a welcome break from the sofa in the student pad (which we noticed was missing the empty tins of beans, cans of Stella and stolen traffic cones!). She gave the performance of the night in our opinion, although the nutty professor who looks like he’s just nipped off the set from filming of Back to the Future 54 wasn’t too bad either! If you too fancy a bit of comedy to ease the January blues then check it out. Running until 2nd February.