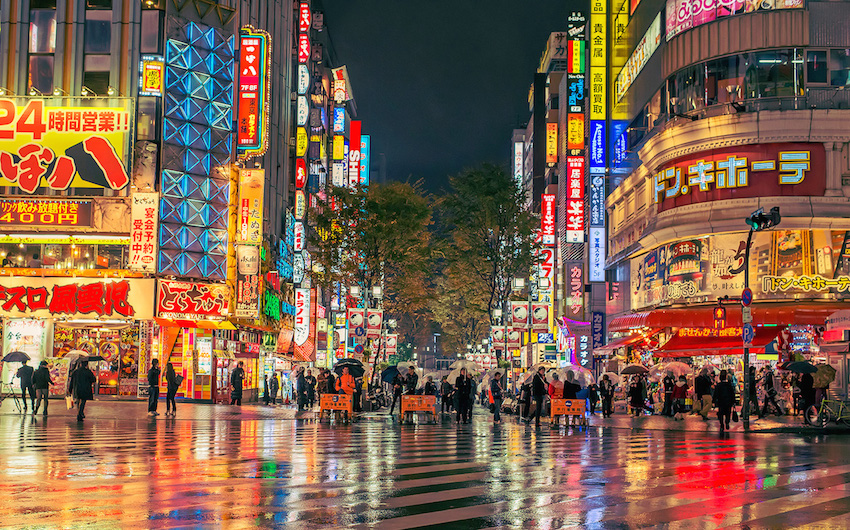 Eight nights in Tokyo might seem like a long time but with a city of this size where there’s so much to eat, drink, see and do you’ll wish you stayed even longer. We stayed in Palace Hotel Tokyo overlooking the Imperial Palace and one of the very few hotels in the city to have balconies, so we had some great views.

Staying so central meant we were perfectly placed for the first stop on our itinerary the infamous Tsukiji Fish Market and whilst it’s rammed full of tourists, it’s definitely worth a trip both to see all of the raw fish been sold off to the restaurants and of course to eat said raw fish. Just make sure you go hungry because as well as the expensive restaurants, the cheap street food is in abundance. We ate sushi for breakfast at one of the many small counter restaurants beside the inner market and, needless to say, it was about as fresh and delicious as it’s ever going to get.

Other must eats include tempura but to get a rezzie at some of the best places you’ll need some serious planning and a kick-ass concierge. Ours at the Palace Hotel Tokyo helpfully made our reservations as these restaurants won’t take direct requests from foreigners and only deal with a handful of hotels too. One of our favourites was Tempura Fukamachi, a Michelin-starred tempura restaurant run by a friendly family who produce incredible, lightly battered fish and vegetables. Grab a seat at the counter to watch the chefs at work, you won’t be disappointed.

To explore this huge metropolis we can’t recommend enough jumping on Tokyo’s ‘Boris Bikes’. It works much the same as in London except these bad boys are electric, giving you an extra kick and meaning you can cover huge distances in a day. We spent days exploring as many areas as possible and eating as much as possible along the way. It would be impossible to list absolutely everything we ate in Tokyo but check out Butagumi for incredible Tonkatsu; late night lamb tonkotsu ramen from Mensho Tokyo; and Yamacho in Ebisu for handmade udon noodle soups.

A night spent bar-hopping in Shinjuku’s Golden Gai is pretty much a must-do for any first-time visitor – in a few densely packed alleyways are around 270 tiny bars, some with no more than a few seats. Pick whichever one you like the look of and get talking to some locals; we found ourselves in a bar ran by a very friendly old Japanese lady sat next to an ex-rugby player and his pop-star girlfriend. Yep it’s that kinda place. You should also stop by “yakitori alley” in Ginza for cheap beer and grilled skewers with the locals.

If the skyscrapers and crowds are getting to be too much, it’s well worth exploring some of Tokyo’s more chilled out suburbs. We stayed for a couple of nights at the BnA Hotel in Koenji, an area filled with artists, musicians and vintage stores galore, all operating at a much slower pace of life than the big urban centre. A couple of stops before, Nakano is also a great area to explore on foot, with lots of small streets and little local restaurants and bars.

Finally, if you played Mario Kart as a kid and always dreamt of doing it for real…. Well now you can (sort of). We turned up for go-karting at Akiba Kart expecting to get dressed up as Mario characters only to be told that Nintendo had banned them from using their character costumes! So we ended up as a ninja and a sexy nurse bombing around the city’s main roads at (surprisingly) fast speeds. It’s still pretty fun though and another interesting way to see the city so we’d still recommend it.

Tokyo is an incredible city with so much to see (and eat!) – our advice overall would be to do a bit of research ahead of time but then just explore as much as possible and see what you like the look of – you really can’t go far wrong!