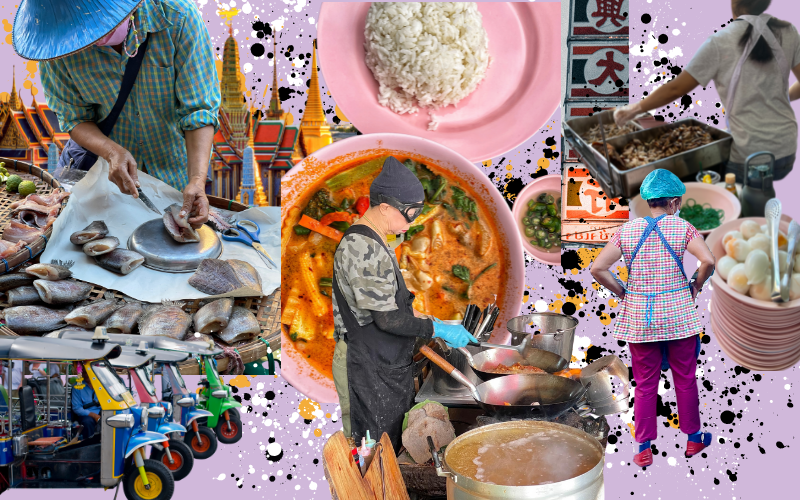 Travelling in the pandemic can require proper planning and serious organisational skills; with rules seeming to change daily, it can all become a little stressful. But, if you’re prepared to do all the paperwork, tests and follow the rules then the end result – seeing and visiting places with a fraction of the usual visitor numbers – can be super rewarding and well worth all those jumps through many hoops. We recently visited Thailand which involved applying for a Thailand Pass ahead of the visit, a pre-departure test, testing on arrival and staying in the hotel until a negative result was received (or being shipped off to hospital if a positive result was received – it happened, even to some who were negative pre-flight) and testing again on day 5 before being free to roam. We spent three weeks exploring Bangkok and Southern Thailand, visiting places we hadn’t been since 2007 and eating everything and anything we could get our hands on…. here’s our itinerary for anyone thinking of making a trip (and we’d highly recommend you do).

No visit to Thailand is complete without spending a few days in Bangers. We based ourselves at The Peninsula, not least because they have their own Covid test lab on site but it also happens to be one of our favourite hotel brands, especially when you’re landing in a location with jet lag. Read our full review here.

The city itself was crazy quiet. Bars weren’t allowed to open when we were there and a walk around Koh San Road and the surrounds was pretty bleak: guest houses, restaurants, bars had all shut up shop, and even the two McDonalds at either end were closed down. Patpong and Silom Night Markets, two of the busiest places in the city are both shut for now too. This is Bangkok though, and luckily there’s still lots of restaurants open. This time we visited Jay Fai (a Michelin-starred street food outfit) for that famous crab omelette and drunken noodles – just be prepared to queue if you don’t have a reservation as wait times run over 2 hours, and reservations are done 2-3 months in advance.

We ate at Polo Fried Chicken, where the fried chicken is bloody good; but the mushroom larb, papaya salad, northern sausage and spicy sauces made the meal. We followed Michelin’s list ticking off a peppery rice roll noodle soup in Kway Chap Uan Photchana; roast meats and noodles in the Century-old Prachak Roasted Duck; and drank litres of Chang with the intoxicated locals on the river down at Jack’s Bar.

There’s a new chef movement in Bangkok with a fair few fine dining spots opening across the city complete with natural wines and hipster décor. We had dinner at 100 Mahaseth, a Northern Thai restaurant located in an old Teak House which focuses on “nose to tail and root to fruit”, using ingredients from local Thai farms. Don’t miss the wagyu steak and the heat packed hot dog. Located at the same address, in a room out back you’ll find Samrub Samrub the private kitchen of Prin Poisuk who was the Exec Chef of Nahm for 15 years, overseeing David Thompson’s restaurants globally. Each night in his ‘kitchen’ Prin hosts around 20 diners for a set menu which he switches up every single month. Samrub means to have a lot of food on the table at once and true to its name you won’t leave hungry. Our menu was themed around the ancient Srivijaya Empire, which was located in South East Asia, meaning the dishes were modern takes on old recipes like marinated oysters with Thai Brandy, Kratom chips with sour baby mango, Muslim soup and curries traditionally found in the South.

Having visited Bangkok previously and explored all the usual spots, we decided to go check out the laid-back neighbourhood of Ari. Officially named one of the coolest neighbourhoods in the world it feels like it could be in Tokyo, not least because of all the Japanese restaurants but also the shops, coffee and tea houses and hipster bars with cool names and branding to match. There’s even a trendy urban style hotel there, the Josh Hotel – one for next time.

From Bangkok we travelled South to Koh Mook, a tiny island in the Andaman Sea off the West Coast of Thailand. To get there, just take a one hour flight from Bangkok to Trang, then about a 45 minute taxi to the coast, and finally a 20 minute boat across the sea. The small island is still relatively undeveloped compared to its counterparts, especially given its convenient location and it’s definitely not the place to find full moon parties or buckets, unless they are used for actual sandcastles. It has a serious laid back vibe and is so small you can walk around most of it. There’s some amazing beaches, a good amount of jungle and great food thrown in too. You can read all about why this island is well worth a visit here.

We then hopped to Koh Lanta, a much larger island just an hour’s ferry ride to the north of Koh Mook. First up, we stayed at the Avani+ exploring the north of the island where most of the action is (although Koh Lanta is still relatively quiet compared to Phuket say). There’s some incredible local food to be discovered along the main road here, including Khanom Jeen (fermented noodles with pickled veggies and curries) and Khao Soi, the delish chicken coconut curry noodle soup at this local spot; a banging spicy fried chicken salad at Weenakaizab, the Thai equivalent of a biryani served alongside an super flavourful cup of chicken soup; Khao Mok Gai which is eaten for breakfast at this street food stall; and a spicy noodle soup at Uan Noodle. We then headed down to Pimalai Hotel in the very quiet, very southern end of the island for two nights, where we holed up in one of the insane Hill Side Ocean villas, having massages in the spa and eating right on the beach. Highly recommended for a couple of days of chill and reset time.

A short boat and car journey later and we were in Krabi town, a relaxed small town with a big street food scene. The town really comes to life at night when there’s three street food markets. Our favourite was the Chao Fah Pochana night market where we ate Khua Kling, a spicy dry fried fragrant meat curry packed with ginger and lemongrass; crispy mussel pad thai; and chilli-laden papaya salads. Around town there is a ton of eating to be done:

After pounding the Krabi pavements we hit the coast – we’d recommend skipping the very touristy Ao Nang or Railay areas which are closest to Krabi town however. Instead, we headed to the brand-new Banyan Tree, a beautiful hotel right in the north of the peaceful Tubkaek beach and next door to a national park and the brutal uphill Dragon Crest trail – which is not for the faint hearted…

From Krabi, it’s easy to pick up a public ferry or even hire your own longtail boat and take the short journey across the beautiful Phang Nga Bay to Koh Yao Noi island, probably our favourite island of them all. It’s a tiny island, with not much on it at all and hardly any tourists – just the way we like it. You can read our review of Cape Kudu, the hotel we stayed at, here. And if you visit be sure to cycle the island as there’s a ton of deserted beaches, beautiful scenery, and great restaurants including Chicken Honey serving sticky, sweet BBQ and a very long list of spicy salads; Sawasdee Restaurant set on a riverbank overlooking the mangroves; and Rest Calm on Baan Tha Khao Pier.

Another very quick boat trip will take you across to Phuket, which makes sense as a final stop as you can fly back to London very easily from here. It might be less than an hour away, but Phuket is a world apart from the chilled out vibe of Koh Yao Noi. It’s a great place to finish a trip though, and a great place to treat yourself to a nice hotel for the final couple of nights. We holed up at the incredible Amanpuri which had a stunning beach, brilliant food and the usual Aman level of service…

Why now is the time to go…

We’d visited a few of these island’s way back in 2007, but this time around there was a fraction of the people on them, with visitor numbers reported to be at the same level as the 80s, meaning now is the perfect time to go. Not just because it’s super quiet, but because they need tourists to visit (and spend cash!). If you do want to experience the islands with only a few other tourists, then we’d suggest making the effort to leave the sandbox islands once you have your negative tests done. Not many people do, but that’s where you’ll truly get away from it all.

To stay up to date with Thailand’s rules and regulations, be sure to check the news and government websites because the rules change often and fast.