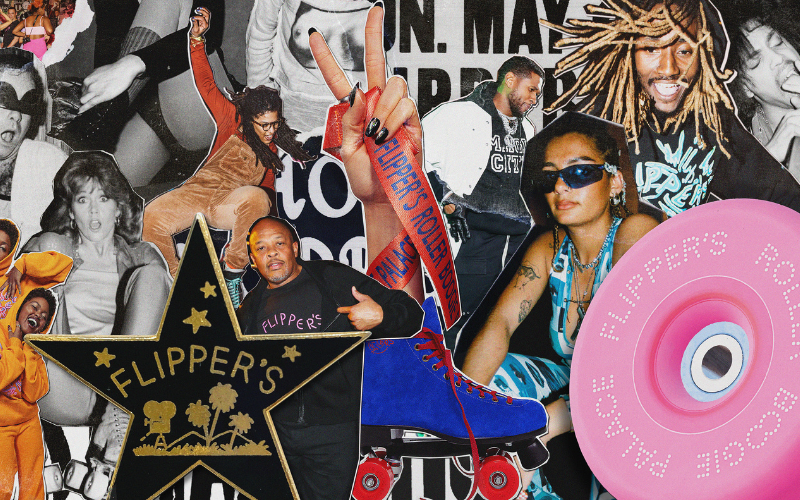 The roller skate renaissance is officially here. It soft launched after Sharp Objects and lockdown boredom had people dusting off a pair. Since then, iconic scenes in two of the biggest shows of the moment, Euphoria and Stranger Things, kept the skating momentum going, and now London is getting a properly cool roller rink next month. Fresh off the back of their New York City revival, which came as a seasonal roller rink at Rockefeller Center in April of this year, Flipper’s Roller Boogie Palace will arrive in all its disco glam glory on the 11th November.

Originally founded in the late 70s by Ian ‘Flipper’ Ross, Flipper’s was a Los Angeles hot spot when it operated between 1979-1981 out of West Hollywood. The boogie palace was frequented by famous faces and dubbed ‘Studio 54 on wheels’ – now the team (comprised of Ross’s daughter Liberty Ross, entrepreneur Kevin Wall and Usher) wants to bring a slice of that action to London. Flipper’s London flagship site will be a destination for both public and private events, plus there’ll be an onsite shop and a programme of live music – kicking off on opening night with a special performance by Central Cee.

Flipper’s will feed its skaters too, with a restaurant called Hot Fogs and Caviar, named after the original diner from the LA location. The menu will be made up of elevated American classics, expect the likes of wagyu smash burgers, loaded French fries with caviar and lemon creme fraiche, and Nashville hot chicken sandwiches with Flipper’s own Boogie sauce. Of course, they’ll serve up cocktails too, with a list inspired by the latest Cali trends. Given the winter we’re in for, sounds like this will come as a welcome ray of West Coast sunshine.