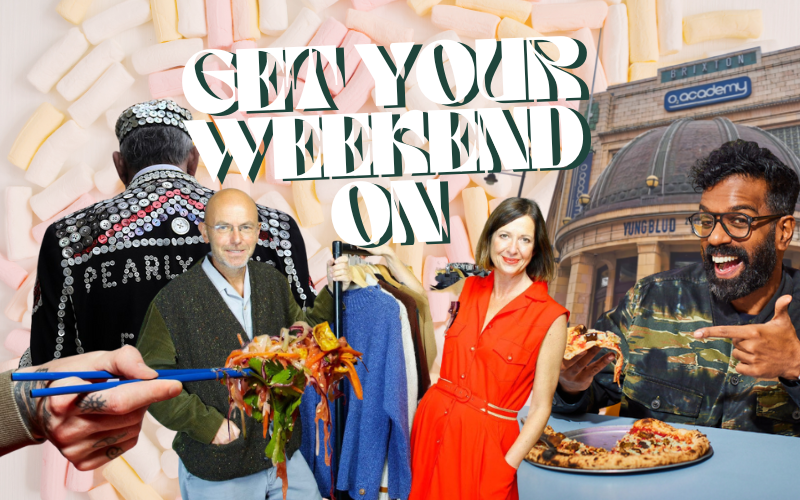 Ever wondered what it was like to live in NYC in the 40s? What about ancient Spain? Or what it’s like inside Yayoi Kasuma’s head? You can get a glimpse of all three this weekend – here’s what’s on.

1. Immerse Yourself in the World of Yayoi Kusama

Harrods is celebrating the latest collab between legendary Japanese artist Yayoi Kusama and Louis Vuitton with a totally dotty pop-up. As well as pieces from the range on display, there’s an animatronic Kusama in the window, a claw machine where you can win prizes, a free photo booth, a patisserie counter stocked with colourful choux buns and eclairs, and of course, there are polka dots absolutely everywhere, with mirrored surfaces creating that infinity room feel. There’s no need to book, so walk on in and explore.

2. Bring Some Luck to Your New Year

Mandy Yin’s laksa hot spot Sambal Shiok is serving up Yee Sang, so you can ring it in with the traditional salad. Also known as ‘Prosperity Toss’, the dish is typically made with raw fish, carrots, daikon, cucumber, pickled ginger, pomelo, peanuts, sesame seeds, five spice power, pepper oil and plum sauce, and is considered to be a symbol of abundance. Drop by Sambal Shiok to try the sharing salad (designed for 4 to 6 people) for yourself – just make sure to book in advance, leaving a note that you want to order the salad on Resy.

Pre-loved fashion concept store Charity Super.Mkt (which started life as a section at the Classic Car Boot Sale) is popping up at Brent Cross and, for the first time, is bringing the best-donated clothing from 10 UK charities together under one roof. The first local and national multi-charity physical retail store will be stocked with pieces from Age UK, All Aboard, Barnardo’s, Cancer Research, Emmaus, Havens Hospice, SCT, Marie Curie, TRAID, and Shelter, making it easier than ever for you to shop secondhand and refresh your wardrobe in a sustainable way.

Featuring photography from the 40s through to the 70s, Streets of New York at David Hill Gallery captures a bygone era of the Big Apple. The show exhibits the work of five masters of street photography from what is considered the art form’s ‘golden age’ – Werner Bischof, Mario Carnicelli, Harold Feinstein, Larry Fink and Marc Riboud – including some never before seen images. Taking you on a journey through some of the most distinctive periods of the 20th century, in one of the world’s most recognisable cities, Streets of New York demonstrates the importance of the street photography genre.

After receiving rave reviews for its premiere run at the Noël Coward Theatre, then transferring to the Gielgud Theatre and the Criterion Theatre for subsequent runs, Danny Robins’ (best known for The Battersea Poltergeist podcast) play 2:22 – A Ghost Story, is on another one at the Lyric, with another cast change (director Matthew Dunster is sticking around), with Louise Ford playing Lauren, Jake Wood playing Ben, Cheryl (in her West End debut) in the role of Jenny, and Scott Karim as Sam. If you’ve yet to see the play, 2:22 is a supernatural thriller that takes place over the course of one night when Jenny, who believes her new house is haunted, and her husband Sam argue with their old friend Lauren and her new partner Ben about ghosts and whether they exist.

The Royal Academy’s first major exhibition of 2023 is an exploration of Spanish and Hispanic art and culture from the ancient world to the early 20th century. There’ll be over 150 objects on show, including masterpieces from El Greco, Goya and Velázquez, and textiles, sculptures, ceramics, jewellery and manuscripts from across Spain and Latin America.

8. Take Care of Your Body and Mind at This Fitness Class

Self Space and Frame have launched the Feel Good Sessions, a new series of collab workshops that blend talking therapy and physical training to maximise the benefits of both approaches – it’s well known that exercise has lots of mental health benefits but new research has shown that incorporating exercise with therapy can also be a mood booster. The sessions, held on Sundays at Frame’s King’s Cross studio along with Self Space therapists, combine workshops that explore challenges and encourage reflection with an appropriately matched movement class. This week, they’re doing a Prioritising Play x ABBA Barre class, a way to tap into creativity and find joy.

9. Have an Experimental Brioche Sandwich

If you like your sarnies supersized, you’ll want to get down to Crunch London pronto. The pop-up at The Prince Arthur is serving up experimental (and big) brioche sandwiches, with fillings including flat iron steak, provolone, roasted red peppers, garlic confit & chimichurri; southern fried chicken, lettuce, pickles & allioli; and feta, roasted aubergine, spinach, crispy onions, sundried tomatoes & pesto. You can continue the crunch with sides like rosemary fries, popcorn chicken, tempura peppers and ham & cheese croquetas, and if you order online, you can even watch your order being made – that defo get you salivating.

10. Try This Pizza Made by Romesh Ranganathan

Yard Sale Pizza is kicking off the year with another guest pizza and it’s a vegan special created in collab with Romesh Ranganathan. The Romesh Spesh is Yard Sale’s classic tomato base topped with Sri Lankan curried aubergine, coconut sambol, mint raita and curry leaf & chilli oil, and a portion of the proceeds from each pizza sold will be donated to CALM.