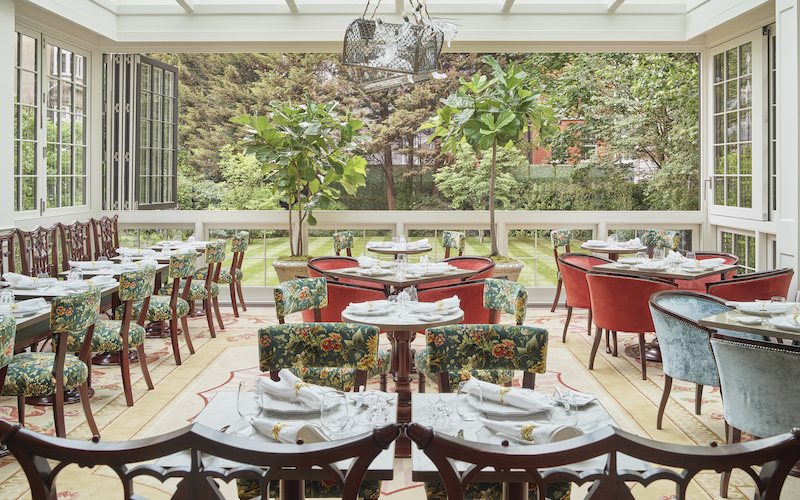 To say that the coronavirus pandemic and subsequent lockdowns has hit the hospitality industry hard would be an understatement but many have found a way to survive in one capacity or another. Restaurants have pivoted into delivery businesses, some have re-opened as delis and grocers, and pubs have started to do takeaway drinks.

However, it’s going to be a tough road ahead for many even when customers are allowed back inside – social distancing and household mixing rules will limit the amount of people venues can serve, which won’t be enough to cover outgoings, so some restaurants have already decided they won’t be coming back once. Here’s the list so far…

Roganic – Simon Rogan’s Michelin-starred Marylebone restaurant has been closed since March and it won’t be reopening in its current spot, with Rogan looking to relocate the restaurant next year.

Roux at Parliament Square – Michel Roux Jr’s Westminster restaurant, which has been headed up by Steve Groves since 2010 is permanently closing, citing the combo of hits taken under lockdown and uncertainty ahead.

Two Lights – It was the combo of the curfew, tier restrictions and second lockdown that’s done it for Two Lights, with the Shoreditch restaurant confirming it won’t be reopening in December.

Herman Ze German – It’s not going to be easy to find traditional Bratwurst and Currywurst in London now Herman Ze German is closing down all their sites. We’ve heard Borough Market is your next best bet for getting your hands on a Deutsch sausage.

Kym’s – Andrew Wong has confirmed that his Bloomberg Arcade-based restaurant Kym’s won’t be re-opening. No specifics were given for the closure but it’s likely due to the fact that most of the offices in the area are empty, meaning significantly less footfall.

The Ledbury – Brett Graham hasn’t confirmed that the two Michelin-starred restaurant will be closed forever but it will be for the forseeable future. He’s said that he’s unable to operate the restaurant with any kind of social distancing measures in place, so the landlord and the suppliers have been paid in full and the staff have been made redundant.

The Dairy and Counter Culture – Robin and Sarah Gill won’t be re-opening The Dairy in Clapham and Counter Culture next door after their business taking a big financial hit during lockdown. The pair still have Sorella and Darby’s and Robin oversees the food at Great Scotland Yard and Birch in Cheshunt.

Piebury Corner – the much-loved pie restaurant is shutting both its sites as it’s no longer financially viable to pay full rent with the big loss in trade, primarily from Arsenal fans on match days. The owners are looking at a pitch for a pie stall near the Emirates when the ground reopens for fans.

KraPow – the team has closed the Clapton restaurant due to Covid-related issues but you can still get your Thai fix from The Heathcote & Star in Leytonstone, The Adam & Eve in Homerton, The Three Crowns in Stokey and on Deliveroo.

Hoi Polloi – the restaurant inside the Ace Hotel as well as the hotel itself won’t be coming back due to the impact of Covid. The Lore Group, who own the building, will be taking over management and renovating the space, turning it into one of their own hotels.

Emilia – owners Will Lander and Dan Morgenthau, who also run Quality Chop House, Quality Wines, Portland and Clipstone, have shut Emilia inside Bonhams Auction House in Mayfair as the location made it impractical to run post-lockdown.

Treehouse – Dominique Ansel is shutting up shop in London. Treehouse, which only opened at the start of the year, has been closed since lockdown and won’t be coming back. He’s also closing his Belgravia bakery at the end of August so it’s your last chance to get those pastries.

Cub – the sustainably-focused bar and restaurant from Mr Lyan and Doug McMaster that blurred the line between food and drink won’t be returning post-lockdown.

Oklava Bakery + Wine – Selin Kiazim is shutting her Fitzrovia site as their hasn’t been enough footfall in central to keep the place open. The Shoreditch Oklava remains open.

Lucknow 49 – Dhruv Mittal is closing his Mughal-focused restaurant in Mayfair, stating that landlords unwilling to adjust the rent and distancing measures have made it impossible for the place to survive. He’s also looking to relocate his other restaurant, Dum Biryani, out of Soho to keep it alive.

Jidori – the Japanese joint in Dalston known for its yakitori is shutting up shop, after struggling to cope with the effects of the pandemic despite running a takeaway service.

Freak Scene – after leaving Kurobuta to open Freak Scene, first as a pop-up and then as a perm restaurant in Soho, Scott Hallsworth has revealed that thanks to COVID-19 and greedy landlords the restaurant won’t be returning.

Bodega Rita’s – the sandwich shop in Coal Drops Yard isn’t re-opening as owners Missy Flynn and Gabe Price have said that they can’t continue towards their long-term goals with trading restrictions in place, but the pair are on the hunt for larger premises.

Cereal Killer Cafe – both the Camden and Shoreditch cafes are saying cheerio to London. The long closure due to lockdown and the uncertain future of the industry means reopening isn’t viable for owners Alan and Gary Keery.

Sardine – Alex Jackson won’t be reopening Sardine post-lockdown, as despite having an understanding landlord, the small restaurant would struggle to implement social distancing measures and trade effectively.

Darjeeling Express – Asma Khan won’t be returning to Kingly Court as she’s searching for a larger space for Darjeeling Express because doing 200 covers in a 50-cover site was getting too difficult. She was already looking to move pre-pandemic but it’ll just take a little longer now.

The Greenhouse – the two Michelin star Mayfair restaurant has closed. Chef Alex Dilling didn’t give a precise reason but other venues owned by the Greenhouse’s parent company closed due to financial issues earlier this year.

Indian Accent – the Mayfair restaurant won’t be re-opening, citing social distancing rules, operating costs that come with being on one of the city’s most expensive streets and economic uncertainty in the UK as the reasons why.

Moxon’s Next Door – the offshoot restaurant to the fishmongers in Dulwich won’t be coming back but the team is looking to increase the size of the shop and add in a deli and cafe.

Shepherdess Cafe – the Hoxton greasy spoon has been serving locals for 37 years but the cafe is unable to reopen, with the owners citing increased rents, COVID-19 and unsympathetic landlords as the reason.

Siren at The Goring – Nathan Outlaw only opened his seafood restaurant inside the Belgravia hotel last year but he’ll be focusing on his Cornwall businesses once the lockdown is lifted instead of re-opening in London.

Le Caprice – the A-list fave, which has been open for 38 years in its current incarnation, won’t be reopening in the same spot, although there are early plans to relocate the restaurant.

Wahlburgers – after arriving in the capital after much fanfare last year, the London outpost of Mark Wahlberg’s burger chain won’t be coming back.