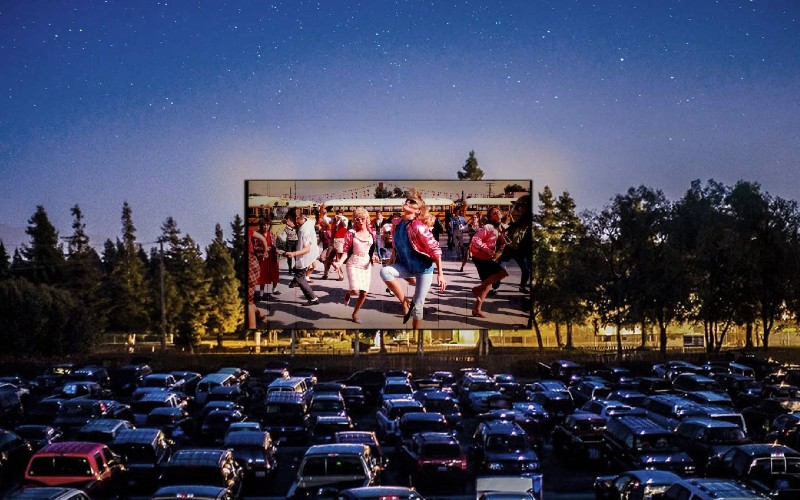 Outdoor cinemas pop-up across the country every summer but with restrictions on outside gatherings. things are going to be a little different this year. Enter the drive-in movie, just like in Grease. Yes we’re turning the clock back to the 1950s in 2020 because the drive-in is the perfect way to socially distance – vehicles can be spaced out, people can stay in their household bubbles and food can be delivered right to the car windows. Get ready to park up at these drive-in cinemas…

Drive-in Film Club – Rooftop Film Club is coming back down to earth and into Alexandra Palace with its new drive-in this July. You’ll be able to watch the likes of Grease, If Beale Street Could Talk, Joker, Pulp Fiction, Mean Girls, ET, Fight Club, The Big Lebowksi, and Black Panther, and you can either bring your own snacks or order Popdogs on site, with food being dropped off outside your car doors. Tickets start from £27.50 per car and you can get them here.

Sunset Cinema – Sunset Cinema is pulling into Acton this July. The programme includes Bohemian Rhapsody, La La Land, Grease, Joker and The Lion King, and Dirty Bones will be doing a menu of popcorn, burgers, shakes and cocktails. Tickets cost £30 per car plus £10 per person in the car. Get them here.

The Drive-In Club – this is promising to be London’s biggest multi-screen multi-genre drive-in experience, and its parking up at Brent Cross and Dagenham in July. as well as screening movies like Up, Captain Marvel, Life of Pi and Rocketman, the likes of Bill Bailey, Jason Manford, Shappi Khorsandi, Milton Jones and Luisa Omielan will be doing stand-up. Get tickets here.

The Drive-In – this is pitching up at Meridian Water in Enfield from July onwards, with a programme of films, theatre and live performances. The first batch of showings has been released, and it includes classics like Dirty Dancing, The Terminator, Bad Boys For Life and The Shawshank Redemption, with more still to be announced, and Nanny Bill’s will be taking care of the food. Tickets are available here at £35 per car with 10 free tickets for NHS and care workers per screening.

Drive & Dine Theatre – The Pub in the Park team are getting in on the action by parking up in Syon Park and Selhurst Park Stadium from 28th July – 2nd August with the world’s largest mobile HD LED screen. Drive & Dine Theatre will screen films like 1917, Aladdin, Jaws, Knives Out and Back to the Future, as well as hosting Mark Watson’s Carpool Comedy Club. Tom Kerridge will be curating the food menu with dishes including maple cured bacon cheeseburger, five bean chilli burrito, chicken tikka masala, TKO biscuit cheesecake and millionaire’s chocolate pot. Get tickets here.

@TheDriveIn – this pop-up is touring the country this summer, making stops in South London (July) and East London (September). As well as screening the films (the programme currently includes Joker, A Star Is Born, The Lion King and Back to the Future), @TheDriveIn will also host bingo, stand-up comedy and silent discos, with American-style grub delivered by waiters on roller skates. Get tickets here.

Adventure Drive-In – another touring drive-in, this one will be hitting Enfield (as well as Essex and Surrey) in August, with films like Joker, Knives Out, Back to the Future, and The Goonies on the programme. Adventure Drive-In will also be hosting in-car dance parties with club classic soundtracks and full lights and visuals on the big LED screen. Get tickets here.

The Drive-In by Secret Cinema – ok so this one’s not in London but when Secret Cinema decides to join the drive-in club, you know it’s going to be worth the trip out of town. The kings of immersive screenings will be putting on interactive showings at Goodwood Motor Circuit from July, with costume and car makeover inspo, pre-film performances, games and more. It premieres with Rush, with the programme also including the likes of Mary Poppins Returns, Toy Story, The Hunger Games, Moulin Rouge, Star Wars, Reservoir Dogs, Pretty Woman, Fight Club and American Psycho. Get tickets from 22nd June here.