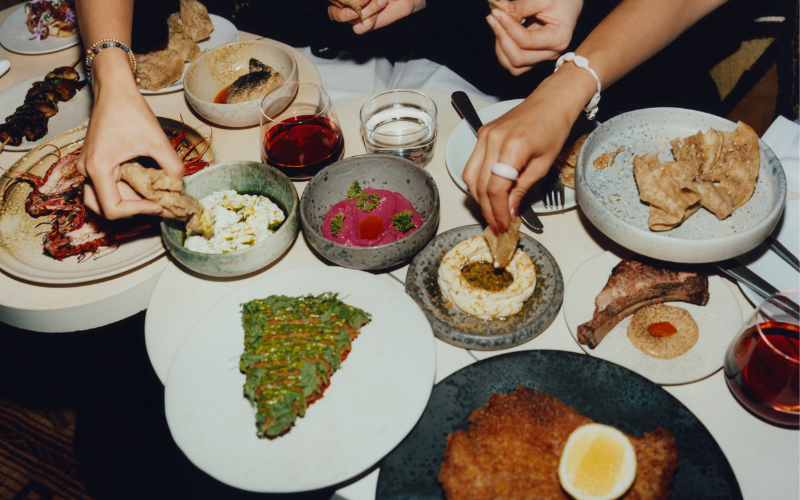 You can probably tell just by the name of this place that it ain’t ya average restaurant. And we wouldn’t have expected anything less from chef John Javier (@sex.pesto) who’s been cooking at hugely hyped pop-ups in London over the past couple of years, after a starry career working at the likes of Noma, as well as his own Sydney restaurant MASTER.

The Tent (at the End of the Universe) is his latest project and, having opened earlier in the year for members only in a new spot on Little Portland Street, the restaurant is now open for everyone to go and check out. It’s a very small dark room and the vibe is basically a deluxe desert Bedouin tent with a star lit ceiling, hanging moon lights and tent-like fabric covering the walls – told you it wasn’t your average spot. There’s just a few tables plus decks where a DJ sits playing tunes each night on a ridiculously good sound system. Photos are forbidden so you can give yourself a night off the ‘gram. It’s all very unusual but we loved it for that.

The food fits largely along a Middle Eastern route, but with several twists along the way. Start with at least a couple of the dips (we got all four to be honest): hummus with chilli oil and burnt lime; tzatziki dressed with wakame oil; beetroot and labneh borani; and taramasalata with onion ash. Add a round of warm, soft flatbread and crudités and you’re off to a wining start.

One of our favourite dishes was a dainty little mushroom shish skewer – an absolute flavour bomb. We tried the lamb version too which was also excellent but oh man that mushroom was the one. Most dishes on the menu lean towards small plate / snack size, but you’ll want to factor in at least one main – for us it has to the the giant Iberico pork schnitzel, beautifully crisp and succulent and served with a katsuobushi mayo. If schnitzel seems incongruous on a Middle Eastern menu, know that it’s actually a very popular dish in Israel, but here John’s amped it up by swapping out chicken breast for Iberico pork.

Talking of amping things up, there’s a bar and club in the basement which has one of the maddest, most incredible sound systems we’ve ever heard. If you thought the set up in the restaurant was good, wait until you see what’s downstairs – a kind of white sci-fi conical system of speakers that produce one hell of a sound. We can’t wait to come back for a proper night down here.

We had a great time at The Tent and would definitely recommend it if you’re looking for something a bit different. There’s great food, a totally unique dining room and all round fantastic experience.