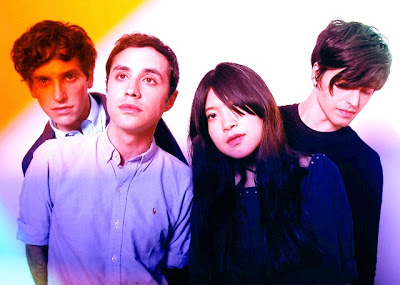 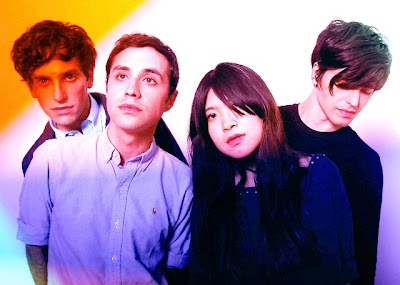 US: Tell us about your new single ‘Heart in the Heartbreak’ – Is that about anyone in particular?

KIP: The single is the first song taken from our new album that we recorded this summer, which will be released in March on Slumberland (US) and Fortuna Pop (UK/EU). Yes, we’re not really creative or smart enough to make things up…??

US: What is the video going to look like?

KIP: I have no idea. We don’t really know a lot about making videos – some bands are really good at them, but I’d rather just focus on making the best music we can and touring as much as possible. That’s why our videos usually go something like “us hanging out, not really doing things, playing the song, hanging out, fin.”

US: What can we expect from your new album due out next year, how do you think your sounds has grown and developed from your 2009 debut? ??

KIP: Well, I hope it has. We’ve always worked really hard on trying to be the best “Pains” we could be. We have real limitations, we’re not the band that a Hollywood casting director or major label A+R person would have assembled if they wanted something to have the best chance of “success.”

But I feel this perverse pleasure in knowing how we’re so much the opposite of everything you’re supposed to do. We’re not cool, we could barely play when we started and my friends take delight in pointing out how terrible we were at our earliest shows (and in my view, still more or less are). We admire the idea of bands like The Ramones, where the music and the ideals of the group are really obvious, really to the point and uncompromising. To me, music is about songs I like, not musicians I want to hear play. So we try to make songs we like.

US: What is your favourite lyric you have wrote? ??

KIP: I don’t know – they’re not all that interesting, just sort of stuff from my life, things I’ve felt. If one becomes someone’s yearbook quote, I’ll smile.

US: Your artwork is always interesting, do you guys come up with the concepts yourself???

KIP: Yes, but we also rely on the talents of the artists/photographers we’ve been lucky enough to work with. Our record sleeves are visually an expression of the music , but the credit is really to the people who helped make them look that way – Kendra Rutledge (s/t LP + “Higher Than the Stars” EP, Winston Chmielinski “Say No to Love” 7″, “Heart in Your Heartbreak” 7″, and forthcoming LP + singles. Even on our first s/t EP, Mike DeSutter made something in the spirit of what we wanted, but way better than we could have done on our own. We definitely are ok with acknowledging that we’re not artists (in any capacity), we’re not video makers – these things we can ask our friends for help on, and it works out to make everything better.

KIP: Well, we have a new record coming out in the Spring, and then touring, touring and touring… It’s really old fashioned of us, I know, but we believe the best way to get people to hear our music is to go and play it for them. The internet is cool, but I always remember the bands I actually get to see far more than just some mp3’s a friend might send me. There’s something wonderful about a dedication to something you love that is unrelenting. The Ramones toured all the time in way harsher conditions than bands do today. I just never want to feel like we ever let a moment of our lives go to waste.

If you ever read “Our Band Could Be Your Life” or any account of the real important bands from the past that paved the way for underground music to even exist in the way it does today, you really appreciate the importance of touring, physically going out into the world and struggling against general indifference, but pushing forward because you so care about the thing you’re doing, that there really isn’t any other choice but to do it. ??

KIP: The Inimitable Jeeves and Carry on Jeeves on Audiobook in the van. Our sound guy/tour manager is British and as he’s driving most of the time, he picks out the music. Though yesterday he indulged us and played Weezer’s Blue Album and Pinkerton, as well as Smoking Popes (we were driving to Rome).

US: What would you pick as your ‘record of the year’???

KIP: The Prids, Chronosynclastic, only because it was so under the radar, yet so amazing. They are one of my favorite bands ever, and I feel like if we can accomplish nothing else in life, I’d feel it worthwhile if more people got a chance to listen to them. But obviously there are too many great ones to mention from 2010: Wild Nothing “Gemini,” “Allo Darlin” “s/t,” Weekend “Sports,” Depreciation Guild “Spirit Youth,” The Secret History “The World That Never Was,” Magic Kids “Memphis,” to name just a few.

I don’t like when things that are set in stone as the definitive, immutable “Best.” It’s such a trivial magazine trick to name “the 50 greatest albums of ALL TIME – The Beatles #1, My Bloody Valentine #2, some current band that we provocatively place in this list #3, should we wait until #9 to list a woman or a hip hop artist?” That sort of thing is such a gimmick to sell magazines, reinforce the values of the target demographic or provoke debate that might give the impression that the given publication is somehow incendiary, iconoclastic, or whatever.

Who can resolve these things? Who has the right? Only you do. Make your own lists if you want, but let’s not build a new offifical doctrine of taste to replace the ones we don’t like. If I just want to listen to Suede, Tori Amos, The Ramones, The Pastels and Crystal Stilts – that makes me happy and I don’t feel the need to justify it. Obviously I listen to a ton of different things, but it’s just no use trying to determine if Comet Gain is better than Belle and Sebastian. They’re both great and important to me, and maybe they’re not to other people – but that’s ok.??

US: Here, here! When you are in London is there any favourite places you like to hangout???

KIP: We just go to shows or see friends, but we’re not very knowledgeable about where the “cool” stuff is – and we’re pretty happy not to ever find it. The Lexington seems to have a lot of good bands and, hilariously, it’s sort of “American Themed.” Like, Buffalos and Guns and stuff on the wall, and Brooklyn Lager on tap. We do get homesick sometimes, so it’s nice to know domestic alcohol and firearms are there for us in those moments.

You can listen to Heart in the Heartbreak below.