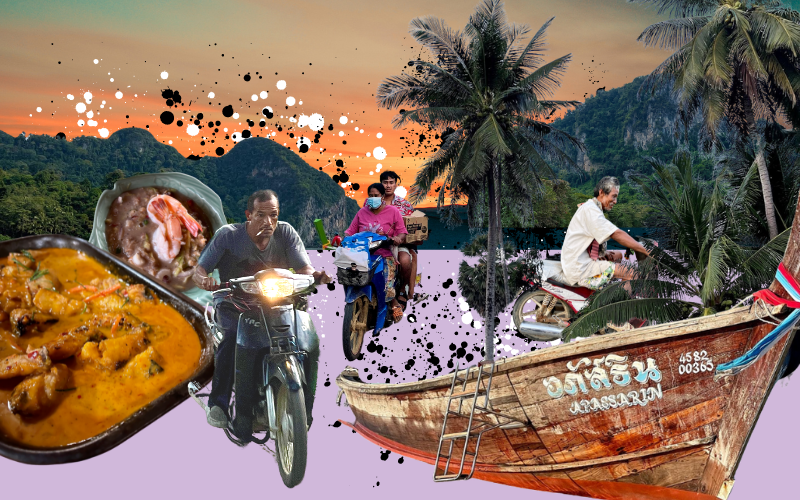 Koh Mook or Koh Muk is a tiny island in the Andaman Sea off the West Coast of Thailand. To get there you make your way to Trang on the mainland and take a 20 minute boat across the sea, so close you can see the mainland from its many beaches. The small island is still relatively undeveloped compared to its counterparts, especially given its convenient location and it’s definitely not the place to find full moon parties or buckets, unless they are used for actual sand castles. It has a serious laid back vibe, and is so small you can walk around most of it. There’s some amazing beaches, a good amount of jungle and great food thrown in too. We visited in January 2022 just as the rules changed for entry to Thailand which meant the island was super quiet; in fact up to 90% of businesses were still closed – some looking like they will never reopen. We did however find super friendly islanders and more than enough to keep us fed and entertained for a fair few nights…

There’s a fair few places to stay on the island, with something for everyone’s budget from camping to pretty luxe beach bungalows. We stayed in the new Explorar hotel which is right on the most beautiful beach on the island. Our tropical bungalow couldn’t have been any closer to the water and waking up to the sound of the fishing boats going out to sea sure beats the iPhone alarm any day of the week. It’s also super close to the island’s mosque (Koh Muk has a large population of Thai-Muslims) so you hear the call to prayer each evening too. The hotel has a great restaurant on site, refreshing pool, and is a short walk from the pier and small town centre too.

Fill Your Boots and Belly

The food on Koh Muk we had was all super tasty. We stuck to Thai food because when in Thailand you really don’t need to eat pizza and pasta. The best restaurants we ate at were Boon Chu Cuisine which did a great papaya salad, larb, Thai omelette and pancake. It gets busy though and food can take quite a while to arrive but such is island life. Good Luck restaurant was another favourite – the larb there was exceptional. The restaurant at Explorar served Southern Thai favourites like Choo Chee curry, orange curry soup and a very nice Nam Prik Khayam – a fermented fish dip with super fresh local vegetables. If you’re an early riser be sure to head to จะสั้นข้าวหมกไก่ too where the owner dishes out a tumeric and chicken rice dish, similar to a biryani, from 6:30am (get there before 8am or it’s sold out!). Also if you’re a crisp lover make sure you pop in the local shops on the island, we found some insane flavours here that we didn’t see anywhere else in Thailand.

These Shoes Are Made For Walking

The island is so small you can walk or hike around it in a few hours. Walking from the East to the West where Garnet Beach is located and most of the more lively bars and restaurants will take you two hours max and that’s with some stops along the way for mangoes, water and pancakes – essential walking goods. You can also hike the jungle; just take the path out of two past the Forest House and follow the red trail into the jungle. It’s pretty easy to make it to Lo Dung Beach – see our Strava trail for the way. Then there’s trails to Sabai beach and the look out too. You’ll come across plenty of people, plantation workers and residents on the way too so you can always ask if you end up lost.

All That Glitters Is Green

The most popular day trip is to the Emerald Cave and people come from surrounding islands to see it. Staying on Koh Muk gives you the advantage so if you do want to see the cave and the hidden beach go early in the morning before the crowds. That said, right now (January 2022) there’s no need to worry about crowds as we could count the other tourists on the island we came across on two hands.

If you prefer your full moon in the sky than on the beach then Koh Muk is the perfect island to bed down on. A chilled out vibe we can get along just fine with.