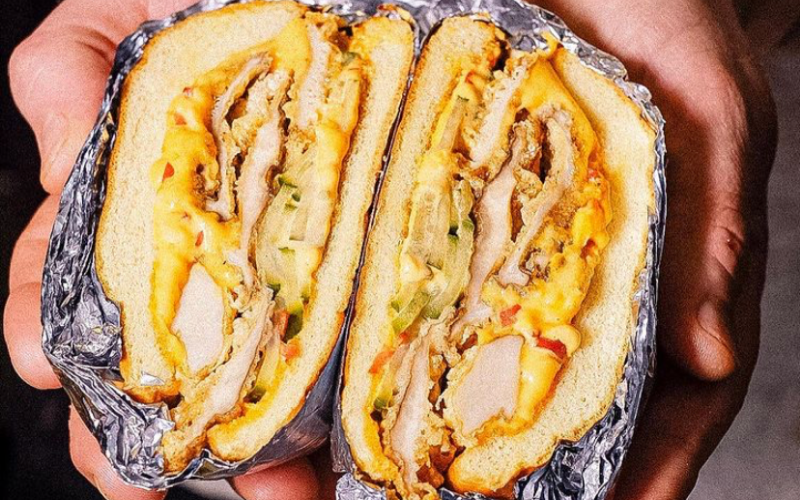 Just like lockdown prompted cafes and restaurants to pivot into takeaways and meal kits, it’s also pushed some chefs who were out of work into launching their very own food brands. It’s proper cool, proper DIY stuff, done over social media and coming out of people’s home kitchens, and it’s proper tasty too. Check out our faves below…

You’re gonna wanna get on these before they BLOW UP BIG.

Started by Ben Bohm-Duchen (who’s worked at the likes of Rochelle Canteen, The River Cafe and Carousel) and art director and graphic designer Sophie Dutton during the summer lockdown of 2020, Millfields Store combines the pair’s love of food and crafts. As well food boxes featuring local produce, they also sell commissioned artworks and objects for your kitchen, and they’re delivering to most London postcodes.

After working at Chick ‘n’ Sours and Sambal Shiok, chef JoJo has gone out on his own with JoJo’s Takeaway, which is his manifestation of London and its mish-mash of cultures in food form. Running out of Crouch End, the two signature dishes are spicy pig ear spring rolls and the epic-looking Saint Dixy chicken burger aka “an edible love letter to all the chicken shops which I’ve frequented with my friends after nights raving.”

Venezuelan chef PatXi Andres had been working at Black Axe Mangal before starting tie-dye business Princess Tie Dyana, during the first lockdown. And now a second lockdown has meant a second business and this time it’s food, although not the initial taco pop-up he planned. Instead he’s doing the “tastiest, most dirty” burritos in town with Burritos Machete and he ain’t afraid to mash-up cultures, creating fillings like kimchi fried rice, rabbit birria and lamb chicharron.

Hot 4 U, aka Matthew Scott (previously of Cub) and Eddy Tejada (previously of St John), launched during the first lockdown with a weekly changing set menu with ambitious and creative dishes like pomme bear crackers, mouth numbing tendons and bone marrow & whisky luges. Not only are the boys back with those menus, they’re also slinging takeaway goodies from The Plough pub.

Ormer chef Tom Moore is bringing back some childhood nostalgia with Moore’ish Crumpets, because you can’t beat a hot crumpet absolutely dripping with butter. He’s baking sourdough and plain crumpets from his home in Dulwich and delivering them around town. DM him to get in on the action.

Head chef at Leroy in Shoreditch, Sam Kamienko has been boiling and baking bagels in and out of lockdown to pass the time. And now he’s set up his own small biz, baking them from his home kitchen before hopping on his bike and delivering them all over London. He does the OG plain bagel, sesame, pumpkin and the everything; they cost just £1.50 each (minimum of four); and he currently delivers to most London postcodes, sso send him a DM to place your order.

After training at Hummingbird Bakery and then being furloughed in 2020, Hash Mastan set up his own bakery biz Hash Blondies. He creates a rotating selection of decadent brownies – flavours have included honeycomb rocky road, Biscoff blondies, matcha Oreo and lemon & blueberry blondies. YUM. He currently offers collection from E12 and delivery around East London.

Run by a Brat chef and based in Sydenham, SmorBakery is here to satisfy all your sweet cravings with classic baked goods like cinnamon rolls, raspberry slices, apple strudels, chocolate babka buns, almond cookies and that Basque cheesecake. You can collect if you’re local otherwise delivery is running in SE London.