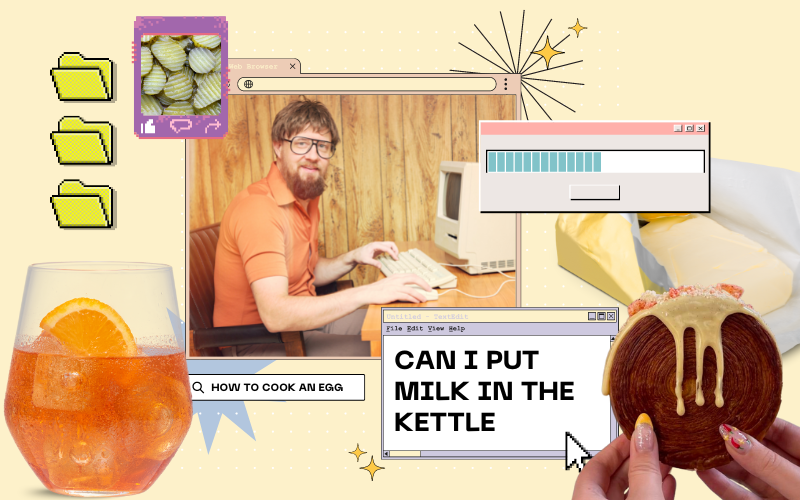 How did people cope in those days before the internet? Before we knew which salad dressing was tearing celebrity relationships apart, or before Emily Mariko taught the world how to microwave rice? They must have been starved for culinary creativity and novelty as they sat, crying into an oatcake, reading the newspaper that made no mention of butter boards. Nowadays, internet food fads are everywhere, and we can only imagine a world without them. Some emerge out of celebrity drama, others are genuinely appealing (if a little bit odd); here are the trends currently on the social media circuit.

No stranger to a viral croissant creation (remember cronuts?), NYC’s latest pastry sensation is the Suprême Croissant which first appeared at Lafayette Bakery. The circular, crème-filled and colourfully garnished croissants are uber-Instagrammable and, as a result, have had people queuing down the street to get their hands on one. While the craze was at its peak in the summer, it’s only just made its way across the pond with Camden-based baker Philippe Conticini bringing the instantly iconic pastry to Londoners. At the moment, the only flavour is chocolate and hazelnut and it’ll set you back a fiver, but what’s a fiver for a hundred likes on IG?

Thinking of pouring myself a drink. Any suggestions? pic.twitter.com/ZbnW4SwQhP

A clip from an interview between House of the Dragon stars Emma D’Arcy and Olivia Cooke started circulating recently and six words captivated the world: “a Negroni… Sbagliato… with Prosecco in it.” Nothing new to long-time Negroni lovers, but lots of people are just hearing about the variant for the first time. It’s easy enough to make yourself (just replace the gin in a Negroni with Prosecco), but if you’re not a fan of short, bitter cocktails, this may not be the one for you.

Spreading room temp butter over a chopping board may sound like an unfortunate kitchen mishap, but turns out it’s a popular food trend at the moment – and it sounds pretty good. Butter boards and the new charcuterie boards, but instead of meats and cheese you get a shareable spread of butter and, well, anything else you fancy. People have topped theirs with honey, edible flowers, truffle slices, herbs, figs, nuts, and much more. Go crazy.

“SO BASICALLY OLIVIA WILDE TOLD JASON THAT FLORENCE PUGH CHEATED ON HER BF W HARRY BUT LATER SHE MADE THE FIRST MOVE ON HIM AND APPARENTLY JASON AND OLIVIA WERE EMOTIONALLY ABUSIVE TOWARDS THEIR NANNY AND OLIVIA WILDE ALSO MADE A SALAD WITH A “SPECIAL DRESSING” FOR HARRY” pic.twitter.com/bTTMZnE617

The details of this top-secret special salad dressing are not 100% certain, but side effects may include high drama and the dissolution of long-term relationships. In a cryptic IG story, Olivia Wilde hinted that the recipe is the same as the one mentioned in Nora Ephron’s Heartburn (2 tablespoons of Grey Poupon, 2 tablespoons of red wine vinegar and 6 tablespoons of olive oil), so you can make it for yourself – if you dare.