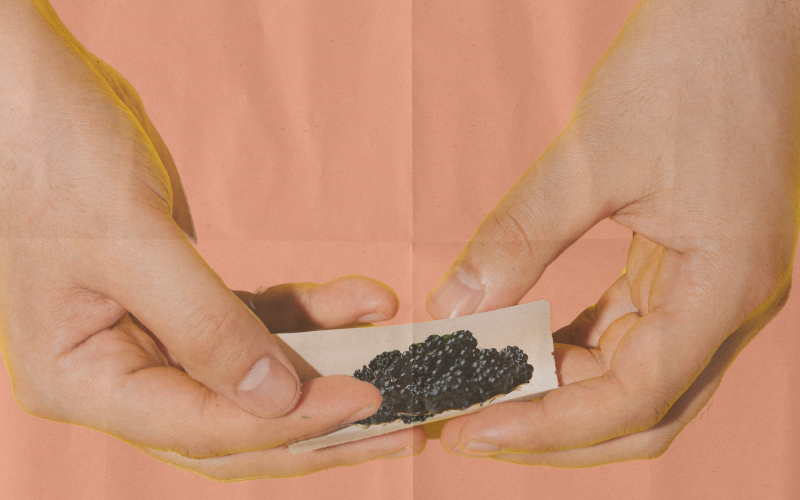 Against all odds, caviar is back on the menu. It never really went away, of course, but was previously confined to the Ritzes and Savoys of the city. Now, despite a Brexit-induced strain on importing, unsustainable farming practices and a cost of living crisis, we’re seeing the rare roe in more and more dishes across London. Could it mark a return to the hyper-capitalist lifestyle of the 80s (for those who can afford it)? Can we expect to see American Psycho types in our local flashing gold cards and bumping caviar? Maybe a few kilos fell off the back of a truck and were found by a lucky restaurateur who’s now running an underground caviar market that’s keeping the flashy, fishy delicacy in circulation.

However it happened, we seem to be heading towards an unlikely caviar renaissance. It wasn’t too long ago that new openings would stress their focus on ‘unfussy’ food; more recently, the word ‘opulent’ is back in play. Before the year is up, we’ll see the UK’s first permanent caviar boutique open in South Kensington and soon, the aptly named Hot Dogs and Caviar will open inside roller disco Flippers (feat. fully loaded fries with “copious amounts of caviar”). Fish eggs are not everyone’s cup of tea, and they certainly aren’t in all of our budgets, but if you think nothing beats a bit of beluga, here are the dishes you’ll wanna get on your radar.

One of Mayfair’s OTT ‘clubstaurants’, Miró has its own extravagant take on classic fish & chips. Layers of crisp potato are topped with fatty tuna chūtoro, Oscietra caviar and pickled wasabi. Toto, we’re not in the chippy anymore.

Caviar is in pretty much everything at the London outpost of Boston seafood spot Saltie Girl – even the drinks. There’s gnocchi with caviar, crème fraîche & spring onion; a caviar & grilled cheese; a shellfish tower that reads like the 12 Days of Christmas (12 oysters, 4 clams, 4 head-on prawns, 4 crab claws, lobster cocktail, tuna tartare, caviar & sea urchin); and the Saltie, a signature cocktail of gin or vodka garnished with gordal olive, pickled onion & caviar.

Common Decency, the drinking den below the NoMad London has quite a few selling points, like its extravagant interiors and its world-class cocktail list, and also among them is the menu of killer bar snacks, created by the hotel’s executive chef Ashley Abodeely. The caviar-topped rosti with bonito cream is a particular highlight.

One of our favourite new openings of the year, Restaurant St. Barts’ 15-course menu features hit after hit. Though the offering changes regularly, you can expect Exmoor caviar (produced at the sustainable farm by the same name) to make an appearance, as it does on these Welsh wagyu bellinis.

Beaufort Bar at The Savoy

The epitome of bougie, The Savoy Hotel’s Beaufort Bar has adopted the trend of ‘bumping’ caviar which became all the rage back in the summer. Similarly to the salt before a tequila shot, the caviar is placed on your hand before you lick it off. Some say this is an elevated way to taste caviar, others that it’s absolutely not – each to their own.