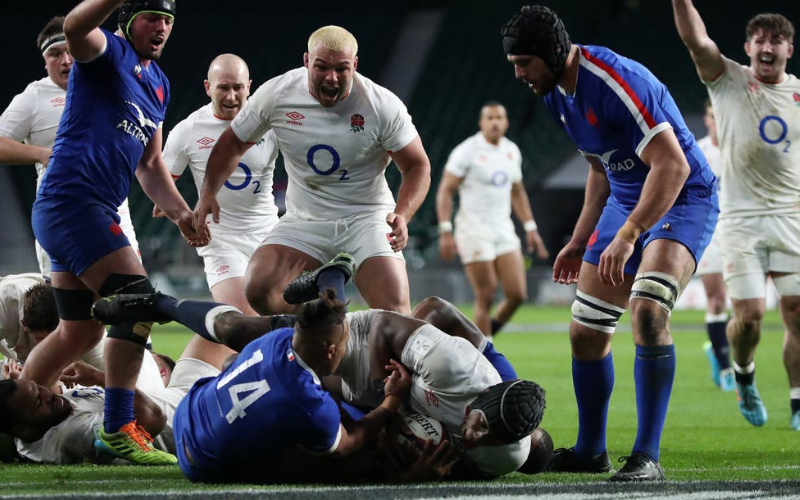 The Six Nations is well underway, with two rounds down and plenty of talking points already. In that vein, we’re celebrating some of the biggest and most iconic rugby moments for each team competing in the Six Nations. If you’re new to the sport, you can get an insight into some rugby history, if you’re a long time fan, you can relive the glory. And don’t forget to join LOTI A.M.C to have your say on this year’s tournament.

It has to be the Rugby World Cup win against Australia in 2003, the first time a northern hemisphere team had lifted the trophy, beating the Aussies in their own backyard in rather dramatic fashion. Picture the scene: it’s the last minute of extra time, the teams, battered and bruised, have been battling it out for almost 100 minutes, the score is tied, and the ref will be blowing the whistle within the next 30 seconds. Matt Dawson breaks through the green and gold line, gains valuable metres upfield, gets his hands on the ball from the ruck, passes it back to Jonny Wilkinson, who boots a drop goal over the posts, taking the score to 17-20 and sealing the win for England. It may have been almost 20 years ago, but every England fan remembers the moment like it was yesterday.

The Six Nations victory for Wales, managed by Mike Ruddock, was the team’s first Grand Slam for 27 years and it included many memorable moments besides lifting the trophy at the end. The win over England in the opening round provided a suitably dramatic start for what was to be a remarkable tournament for Wales. The Welsh trailed the English by one point with four minutes on the clock – enter Gavin Henson, who stepped up to kick a massive 44-metre penalty to snatch the victory, the first time they’d beaten England at home since 1993. The final match against Ireland at the Millennium Stadium provided the cherry on top of the cake, with the Welsh winning 32-20, the first time they’d beaten the Irish in Cardiff since 1983, taking the tournament, the Triple Crown and the Grand Slam.

This was the campaign that saw Italy notch up back-to-back wins for the very first time, first beating Scotland in Edinburgh and then a 23-20 victory over Wales in Rome. Kaine Robertson scored a great solo try in the first half to put the Italians ahead, with Mauro Bergamasco going over the line in the 77th minute, followed by a conversion from Ramiro Pez, to clinch victory from the Welsh who had managed to open up a lead in the second half.

This match, played at Twickenham, is considered by many to be the greatest game in the history of the Rugby World Cup and is a true underdog story. The All Blacks, who boasted Jonah Lomu in his prime, were tournament faves and notched up impressive wins in all their preceding games, including getting 101 points past Italy. France were doing ok, winning but without any real form or rhythm, and they were nailed on to lose this game. The first half followed the script with the Kiwis racking up a 24-10 lead, But there must have been something in the French water at the interval (no doubt they had a stern talking to as well) because Les Bleus came back on the field, turned on the French flair and scored 33 points, stunning New Zealand and the rest of the world with a 43-31 win. Ooh la la.

Declan Kidney’s 2008 Ireland team lives long in the memory thanks to this Six Nations campaign, which saw them win the championship for the first time since 1985 and the grand slam for the first time since 1948. And it was clinched in rather dramatic fashion in the final game against Wales in Cardiff. There was a memorable try from Tommy Bowe, a drop goal from Ronan O’Gara two-and-a-half minutes from the final whistle to take the score to 17-15 for the side in green, and a missed last gasp penalty from Wales’ Stephen Jones to secure the win for the Irish.

This Calcutta Cup match at Murrayfield went the way of the home team – their first Calcutta Cup win in a decade – with a final score of 25-13. The Scots really did run riot, scoring three tries (a double from Huw Jones and one from Sean Maitland) in the first half, before standing strong and keeping the English at bay for the second. It was the first time they’d scored a try at home against England since 2004, the first time they’d beaten England since 2008 and the best win against their old rivals since 1986.