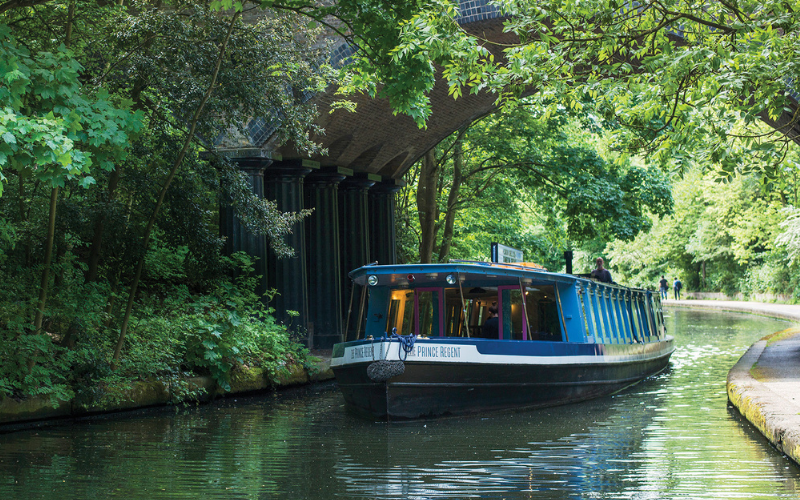 Given that London is bisected by a major river, not to mention several canals, it’s not surprising that the city is rich in waterfronts. Stumbling across one of the capital’s towpaths can be like discovering an oasis in the desert – especially if you’ve found it at that perfect hour on a sunny day – and the banks of the River Thames boast some of the world’s most iconic views. And there’s no better way to fully appreciate these canal and riverside spots than at one of the city’s best waterside restaurants. So, whether you fancy heading to a London institution, a trip down a quaint waterway, or an ultra-glamorous floating steakhouse, here are our recommendations.

As you may have guessed by the name, The River Café sits on the north bank of the River Thames. it’s also one of London’s legendary restaurants, credited with popularising proper, regional Italian food made from the finest ingredients. Despite its seniority and hefty price tag, The River Café doesn’t feel stuffy (in both senses of the word) – it’s bright, airy and super-chic. You’re almost always guaranteed a celeb sighting or two. This is a fantastic spot for a long lunch, as long as you have deep pockets and are happy to pay £25+ for their unbeatable homemade pasta.

Regent’s Canal is a bit of a gold mine when it comes to waterside restaurants, running through many of the city’s hotspots and picking up foodie treasures as it goes. Towpath is a cafe that sits along the Haggerston stretch of the canal and a cult favourite for its glorious and ever-changing menu of simple, seasonal dishes that always hits the spot. And the location – outside seating along a shady, serene canal path – is a perfect oasis away from the hustle of the streets.

Heading further east to Hackney Wick, CRATE is a brewery and pizzeria that sits right on the water’s edge of the River Lea. This is an idyllic spot where you can enjoy some pizza and bevs – we particularly rate the citra sour and the cider – helped along on a hot day by the breeze off the water.

Climb aboard the Cheese Barge for a certified cheese feast along the Grand Union Canal in Paddington. The two-floor boat is home to this seasonal cheese-focused restaurant, which serves up a menu of cheeseboards, small plates, sharers and grilled cheeses. Of course, there’s plenty of wine to pair with your cheese and sip while looking over the canal.

Le Pont de la Tour gets its name from the London monument it has a perfect view of, Tower Bridge. A longstanding London restaurant, Le Pont has been around for over 30 years now and recently expanded with a new bistro in its downstairs bar which made space for an extra 24 covers on its coveted terrace. The menu is inspired by the bistros and brasseries of France, so expect classic but modern French cuisine.

Another waterside joint that makes its home on the Regent’s Canal is London Shell Co., which is not only on a boat, but actually takes you on a float down the waterway. While you dine away on the seafood-focused menu, you’ll drift past London landmarks like London Zoo, Maida Hill Tunnel and Regent’s Park. If you’d rather stay still when eating, they’ve got a second boat that stays moored, so you can get all the seafood and wine, minus the motion.

Just a stumble up the river from The River Café, Sam’s sits on the same riverside and is the third branch of Sam Harrison’s eponymous brasserie group. The modern European menu opens with oysters and seafood platters to complement the impressive waterfront view and continues with a range of classic Anglo-French dishes.

When you’ve got an area called Little Venice, you know you’re not gonna be short of places to be by the water. The Summerhouse is just one of them and their MO is to give you that holiday feeling without needing to leave the city. Instead of a plane, hop on the tube to Maida Vale and sip some rosé with a summer salad or what they would argue is the best fish and chips in London.

The prolific (with branches stretching from its flagship in Spitalfields to NYC) and glamorous steakhouse Hawksmoor launched its newest addition in late 2021, taking to the water on a floating pavilion in Canary Wharf. This Hawksmoor site has a menu that centres around grass-fed dry-aged ethically reared beef, sustainable seafood from the south coast and some of the biggest hits from the Hawksmoor New York menu. It also boasts The Lowback, a mega bar pouring the ultimate martinis and champagne cocktails.

Caravel is another gem along the Regent’s Canal, a 40-cover restaurant on a renovated barge with a menu of simple but very well-executed dishes – all with an element of fun. Highlights include duck croquettes shaped like ducks, prawn toast spiked with chilli and lime, chicken liver pate served with slices of brioche toast and pickles, and a delightfully retro wobbly rhubarb jelly with Chantilly cream and honeycomb.

The Daisy Green Collection is all about celebrating Australian food and coffee culture and over in Paddington, they’re doing it on the water with their two barge restaurants Darcie & May Green. The brightly coloured boats have been designed British pop artist Peter Blake, bringing a nice contrast to the otherwise relatively grey Paddington canalside. Once you’re on board, you’ve got everything from banana bread sandwiches and sweetcorn fritters to BBQ tandoori salmon and chicken parmigiana to get stuck into.

The Gladwin Brothers’ Nutbourne is located in Ransome’s Dock, just off the Thames and next to Battersea Park. As with their other restaurants, Nutbourne is a slice of the Sussex countryside in London, with a menu of sustainably sourced, best-of-British produce and wines from the Nutbourne vineyards in West Sussex. With a sunny terrace that looks out over the dock, this is the kind of place you’ll want to spend the entirety of a sunny day.

At Granary Square, The Lighterman is an impressive new build (well, it’s six years old now) perched beside the King’s Cross stretch of Regent’s Canal. The three-storey building comes with plenty of outdoor seating options: at the canal-side bar, on the Granary Square terrace or on the wraparound roof bar with panoramic views. For casual dining, upscale pub grub and fabulous views, this is a great spot.