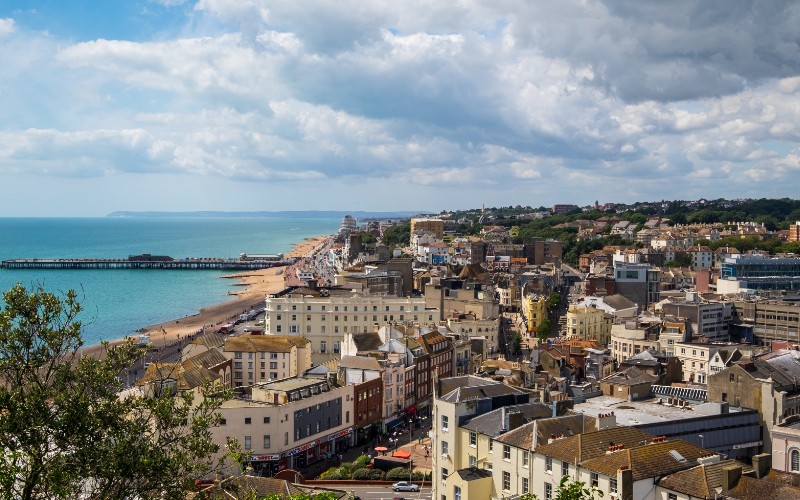 Holidays abroad are fun but they’re also a lot more hassle. Not only do we have some beautiful beaches in the UK but we’ve got lots of seaside towns that are perfect for a summer staycay. Who needs Spain anyway?

Deal, which is on the Kent coast between Sandwich, is super laid back and friendly and has enough little restaurants, pubs and delis to keep Londoners happy – The Ship Inn and The Rose are both great places to stop for a pint, and you can refuel on scotch eggs, sausage rolls and flat whites at Hut 55 on the beach. You’ve got to have fish and chips when you’re at the seaside so join the queue of locals at Sea View and take your supper to eat on the beach as the sun goes down.

Tynemouth boasts one of the best beaches in the country in Longsands, which is great for long walks as well as being a popular surfing spot. But the other beach, King Edward’s Bay is also well worth a visit as it’s home to Riley’s Fish Shack, and you just can’t beat eating fresh seafood right on the beach. Down that end of town you’re also right next to Tynemouth Castle and Priory, so head up there to explore the ruins and enjoy the views over both the Tyne and the North Sea.

Whitby has charm in bucket loads and is steeped in history, from St Hilda driving snakes off a cliff edge to being home to the Dracula Museum (Bram Stoker’s famous novel was inspired by the town). Aside from exploring the gothic ruins of Whitby Abbey, you can jump on a boat to go whale watching, drink your way around all the traditional boozers, and eat seafood the Magpie (follow that with a lemon top from the nearest ice cream shop). You can even stay at Whitby Lighthouse, set on the edge of a dramatic cliff giving stunning views over looking the ocean.

Perched on the North Sea coast of Suffolk, Southwold is a traditional kinda town. More old school pier and working lighthouse rather than flashy shops and funfairs, it’s a seaside resort you don’t see much of anymore. Home to Adnams Brewery, established in 1872, Southwold is most definitely a beer town so you can’t miss a trip to the brewery (and then several to the local pubs). You can even stay in the Adnams-owned The Swan hotel to make sure you’re never too far away from a pint. When you are ready to swap the beer for food, head for The Sole Bay Fish Company for freshly caught fish and shellfish platters.

If you want to soak up some culture as well as some sea air then St Ives is the place to do it as it’s home to the Tate St Ives, the Barbara Hepworth Museum and Sculpture Garden and many smaller galleries. With white sand, blue sea and cobbled streets, the town itself is picture-perfect too. If you can tear yourself away from the beaches, take a trip just along the coast to Seal Island to check out seals (duh!) in their natural habitat, not to mention some epic views of the Cornish coastline.

The fact that Plockton is often referred to as the ‘Jewel of the Highlands’ tells you that’s it a pretty picturesque place – in fact in good weather you’ll often see artists at work trying to capture the beauty of the light. Not only can you take in the views of Loch Carron from the palm-lined seafront, you can go kayaking, sailing and rowing on the water, or jump on a boat trip to look for dolphins and seals.

Harbour town Tenby, on the southwest coast of Wales, has charm in bucketloads; it boasts three sandy beaches, it’s got medieval stone walls and castle ruins, and there’s a parade of pastel-coloured houses hugging the coastline. You can explore some of that coastline on the Pembrokeshire Coast Path – there’s a great stretch from Tenby to Saundersfoot – or you can get out on the water from some mackerel fishing. Tenby’s Welsh name Dinbych-y-Pysgod means ‘Little Fortress of the Fish’ so you might be in for a good catch.

When someone says Hastings your mind probably jumps to 1066. Yes, Hastings is a town steeped in history, from Hastings Castle, which was the first motte-and-bailey castle to be built on English soil (if you ever had to make a model one of those at school, you’ll know it’s a big deal) to the Hastings Museum & Gallery. Hastings is also home to the largest beach-launched fishing fleet in Europe, meaning they do some damn good (and sustainably caught) seafood here too – Maggie’s is the spot for old school fish and chips, and Rock A Nore is the one for the catch of the day.

With cute houses lining the hillside and blue waters stretching out beneath, Salcombe is one of the prettiest towns in South Devon. It’s on an estuary, making it ideal for sailing, paddle boarding and kayaking, but if that all sounds like too much work you can relax on the sandy beaches and secluded coves. Salcombe Gin and Salcombe Brewery are both residents of the area meaning you won’t be going thirsty here either, and yes you can do tours of both. Chin chin.

Pittenweem on the East Neuk of Fife is an active fishing village so the harbour is where all the action is – check out the traditionally designed houses with crow-stepped gables before heading to the daily fish market. If you head just north of the town, Kellie Castle is worth a look too. Pittenweem hosts an annual arts festival, with artists exhibiting their work in houses, garages and sheds across the town, so it’s a great way to mix with the locals.