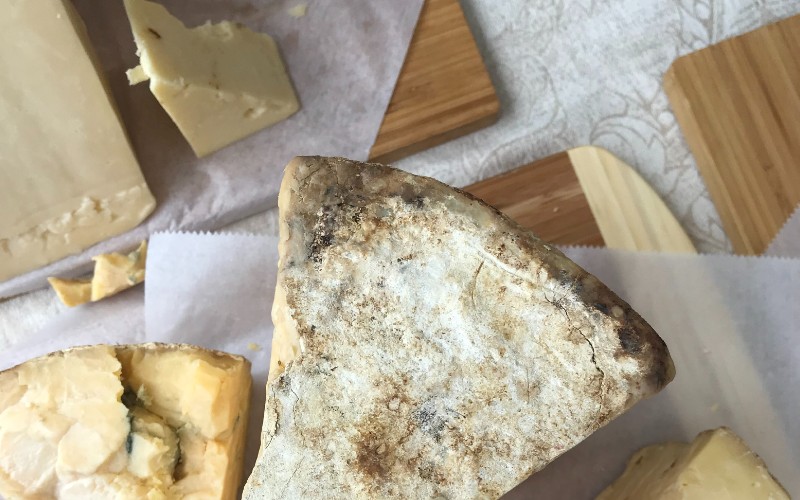 Every sector of the food and hospitality industry has been affected by the coronavirus pandemic but British artisan cheesemakers are at risk of being wiped out completely. Many that supply restaurants and delis have seen a huge drop in orders as venues have closed, but the cheesemakers can’t shut their businesses overnight. Animals on farms still have to be milked (even if it ends up being thrown away) and cheeses that have already been made have to be stored somewhere, and space is running out – this is is a particular problem for soft and blue cheeses, which only have a short shelf life.

Lots of the independent shops still open in London are selling cheeses but if you’re not local, you can get a whole range of British cheeses delivered. So forget queuing at the big supermarkets and have these excellent cheeses come to you, whilst helping keep the British cheese industry alive at the same time. There’s even a virtual British cheese festival coming – as if we needed another excuse to get those orders in.

The Cheese Truck – The Cheese Truck, creator of THAT cheese conveyor belt, has started a cheese delivery service, bombing around London in their van. They do runs in different areas of London each day, so check the schedule here to see when they’re coming to you. And it’s not just cheese either, there’s British charcuterie and DELISH wines as well as some brilliant larder essentials. Top tip: they have the Anglum (British halloumi – THAT one from Bubala) and Baron Bigod (cheese of dreams). Oh and there’s mail order too if you’re outside London.

Butlers Farmhouse Cheeses – Butlers Farmhouse Cheeses is based up in Lancashire and they make a big range of cheeses from their own herd of cows and sheep. They’re delivering all around the UK and we can particularly recommend their Blacksticks Blue and the soft creamy Button Mill. Plus, if you’re actually going into work somewhere at the moment they also have a special “Letterbox Cheese” selection which will be packaged in a special flat box that can be delivered even if you’re not at home.

The Cheddar Gorge Cheese Company – if you’ve been stocking up on cheese lately, then you need to have a good cheddar in the mix. And if you’re going to get a cheddar you might as well get one made in Cheddar (the only one in fact!). Their cheeses have won several awards over the years so it doesn’t really get much better than this when it comes to your classic English cheddar. Although their shop is closed for now, you can buy all their cheeses online, from the vintage cheddar to a cave matured version, and extras like cheese straws.

Neal’s Yard Dairy – the cheesemongers put together a Save British Cheese Selection featuring three cheeses most at risk (Baron Bigod, Kirkham’s Lancashire and Stichelton) for £25. The first batch has sold out but more boxes are coming soon. You can also build your own selection on the website too.

La Fromagerie – the Highbury branch of La Fromagerie, aka one of the best cheesemongers in town, is still open for you to shop at the door and collect orders. If you’re not local, you can order online for delivery with lots of British varieties to choose from.

Wildes Cheese – these Tottenham-based cheesemakers produce their own range of cheeses, including the soft London Blue, the hard Napier and the wash rind Rebellion, and they deliver nationwide.

The Cheese Geek – you can buy one-off boxes from The Cheese Geek but if you’re really geeky about cheese, you can set up a subscription to ensure you never go without. There are a lot of English cheeses, like Rollright, Baron Bigod and Tunworth, available for you to pick & mix from.

The Courtyard Dairy – as a Cheesemonger of the Year winner at the World Cheese Awards, you can bet that The Courtyard Dairy knows its stuff. Let them do all the hard work by opting for one of the selection boxes; there’s the Classic Cheeseboard, Soft and Smelly, Modern British Cheeses, Brand New British Cheeses and more, all showcasing varieties from across the country.

The Cheese Shed – if you’re after cheeses from the West Country, then head for The Cheese Shed. You can get subscriptions or buy individual cheeses including Stinking Bishop, Tor, Cornish Yarg and Washbourne.

WHERE TO DO PLASTIC-FREE SHOPPING (2)

HOW TO THROW A BIRTHDAY PARTY IN ISOLATION (1)