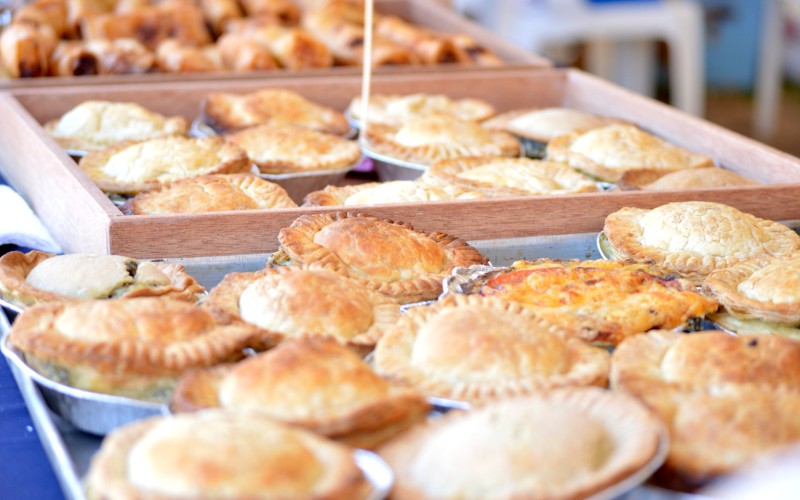 Loads of pubs and restaurants have turned to takeaways and meal kits to keep all us fed during lockdown and the range is pretty astonishing – London is one of the best restaurant cities in the world after all. Sometimes though only one kind of food will do and there ain’t nothing like a hearty pie when it’s cold and pissing down with rain outside. These are the best pie deliveries in town.

Pie master Calum Franklin has teamed up with Restaurant Kits to launch his first ever at-home kit, giving us the chance to re-create his signature pies in our own kitchen (well try to at least). He’s kicking things off with a chicken and shiitake mushroom pie, with sides of slow cooked carrots in cumin butter and swede & potato mash. And there’s the option to add in a lattice roller, pastry brush and enamel tin for an authentic pie experience.

Good news, Chin Chin are now delivering their pies nationwide so everyone can get a slice of the action. These postable pies include their signature cherry pie served with their tonka bean liquid nitro ice-cream and their banana jam pie featuring layers of Chin Chin’s bestseller Burnt Butter Caramel liquid nitro ice cream. We’re not drooling, you are.

Willy’s Pies is a new kid on the block but he’s already delivering some of the best pies in London. The pies change weekly with four main options – one meat, one veggie, one sweet tart and the mainstay, the treacle tart – and all savoury pies arrive ready-to-bake. Willy’s got big balls too, he’s grafted in some of London’s top restaurants Brat, St John Bread and Wine and Rochelle Canteen so it’s safe to say he defo delivers.

Nicholas Balfe has launched Levan To Go, offering a seasonal set menu of small plates, a sharing main and a dessert that you just need to finish off at home. There are two options, meat and veggie, and it’s the latter that includes Levan’s epic mushroom, potato and Vacherin pie. Cheese, potato AND pastry that you can eat on the sofa in your joggers, literally what more could you want?

There’s only one pie available from Grateful Pies so it’s a good job that it’s a good’un. Created by Farika Holden, who was inspired by a dish in her grandmother’s recipe book, the pie has an olive oil crust and is filled with green lentils, apple, onion, celery, mushroom, potato and spices. Yes it’s a plant-based pie and each one serves six so you can keep a lot vegans well fed with one of these babies.

The Marksman is back with a provisions menu, meaning you can get your hands on some of their classics at home. They’ve stripped it right down to the elite dishes only – buns, roasts and pies like chicken & mushroom and beef & winter truffle – and all you have to do is finish them off. The pies can even be frozen, so makes sense to order a whole batch right?

This isn’t technically a pie delivery because these are only available for collection from the Spitalfields restaurant but we couldn’t not include St John – plus going to pick one up is the perfect excuse to get out of the house and get some steps. They’re doing a different pie each week, think flavours like pheasant & trotter and pig & potato, and they come in an enamel dish (which you get to keep and then fill with your own attempts at a pie later down the line). And for every pie sold £1 gets donated to homeless charity Streetsmart.

The pie gets an Indian twist courtesy of Benares and their two new puff pastry creations – there’s a chicken tikka one and a tandoori paneer one, and both come with a sweet berry chutney on the side. You can get this delivered as part of the Benares @ Home menu anywhere within the M25 or if you’re on a walk though Mayfair, you can grab one to go from the restaurant.