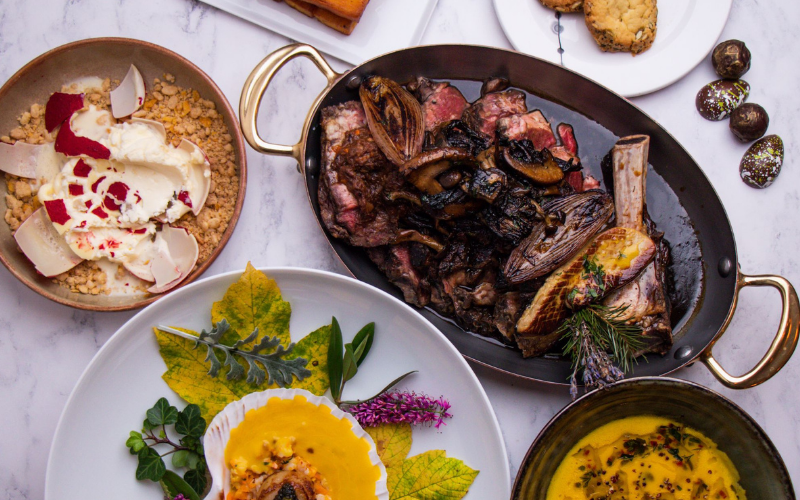 There’s so many new restaurant openings in London that it can be a hard task keeping track of what’s opening where and when, which is why we keep a handy list of the freshest new spots regularly updated for you. But if you like to plan ahead and get those ressies in early, we’ve also rounded up the best new openings planned for 2022 so you can start working on your restaurant hit-list for this year. With this little lot all coming, we predict those lists are going to be rather long….

Husband-and-wife chef team Tamas Naszai and Tomoko Hasegawa, who’ve worked at Tokimeite and Sake No Hana between them, are opening ten-seat Japanese restaurant Roji in partnership with the group behind Chisou and Sushi Atelier. Roji, which can translate to ‘journey’, ‘path’ or ‘hidden alley’, will be tucked away on South Molton Street in Mayfair and will serve up a seasonal menu of sushi, pickled and preserved dishes, and charcoal-grilled dishes, with a focus on British produce like Cornish seafood and veggies from Nama Yasai farm in East Sussex. The pair will also be showcasing crockery made by small family producers in both the UK and Japan.

Japanese-Peurvian spot Chotto Matte is expanding in London with a new site coming to Marylebone this year. Executive Chef Jordan Sclare will serve up the same beautifully presented Nikkei cuisine that Chotto Matte has become famous for – sea bass ceviche, yellowtail nikkei sashimi, and tentaculos de pulpo with yuzu & purple potato – as well as new dishes like fatty tuna and robatayaki salmon with smoked jalapeno chilli, persimmon and truffle. The Marylebone restaurant will also launch the new Tokyo to Lima cocktail menu, which’ll feature ten new drinks made with ingredients from the kitchen like coriander, teriyaki, miso and black pepper.

After running a residency at The Dorchester Rooftop last year, Adriana Cavita is coming back to town and opening her own restaurant in Marylebone Village. Cavita will encapsulate cooking methods from all over Mexico, with Adriana drawing on both her roots in Mexico City and the time she spent travelling around the country. The 70-seater restaurant has an open fire kitchen at its core and its interior hopes to capture the honest and unvarnished appeal of Mexican restaurants, with wooden and tile elements, exposed bricks and a warm earthy colour palette. The menu will feature Pollo al Carbon, chargrilled corn-fed chicken, verde mole, tomatillo, roasted poblano & pumpkin seeds; Carne a las brasas, dry-aged bone-in ribeye with amarillito mole of Guajillo chilli & mixed spices from Oaxaca; Puerto Nuevo lobster with ajillo sauce, avocado & tomato salsa & black beans; heirloom tomatoes with macha sauce, avocado & grilled nopales; and corn cake with salted caramel ice cream, strawberries & dulce de leche sauce. Not content will bringing us all of that, the space will also be home to Mayahuel, a dedicated mezcal bar with its own entrance on Wigmore Street.

Not content with opening RAI, the Hot Stone team are also bringing us The Gurkhas in 2022. The new restaurant will showcase authentic Nepalese food (as you might be able to guess from the name), and explore Nepal’s relationship with Britain through tasting menus that blend traditional Nepalese dishes with British influences.

British-Ghanaian restaurateur Akwasi Brenya-Mensa is opening his debut restaurant Tatale in London at the start of the year. Inspired by the chop bars that are popular in West Africa, Tatale will open inside The Africa Centre in Southwark and will be a place where Akwasi can tell stories through food, art, and culture. Named after the Ghanaian dish tatale, a plantain pancake, the restaurant will be pan-African, so you can expect the likes of Omo Tuo Nkatekwan Sesame (mashed rice with groundnut, peanut soup); the Tatale signature chicken burger 2.0 with buttermilk fried chicken, shito chilli, citrus yoghurt & basil oil, and Akwasi’s plantain cheesecake.

Bibendum’s Claude Bosi and Samyukta Nair (the restaurateur behind MiMi Mei Far and Jamavar) are teaming up to open French-Mediterranean bistro Socca in Mayfair, on the post where Richoux used to be. We don’t have any firm menu details yet but the restaurant will focus on the flavours of Nice, Marseilles and Cannes so we’re expecting a good dash of French Riveria chic.

AngloThai, the British-Thai kitchen concept run by husband and wife team John and Desiree Chantarasak, has been popping up across town (including a residency at Newcomer Wines) and releasing very popular meal kits (including a banquet box with Irish beef and sai ua hot dog kits), and now they’re going perm with their very own restaurant. Details are thin on the ground at the moment – we don’t even know the location – but the opening is backed by restaurant group MJMK, who are also behind Casa Do Frango, KOL, and the soon-to-open Bar La Rampa. We don’t know what’s going to be on the menu either yet, although it will showcase their signature blend of British ingredients and Thai flavours – dishes at past pop-ups have included the likes of som tam farang salad, red curry pork sausage and grilled poussin with fish sauce caramel glaze. Desiree will be overseeing the wine list, so we’re expecting to see low intervention and natural bottles

Shoreditch spot The Boundary, which is home to a rooftop, 17 bedrooms, basement restaurant space and the Albion Cafe, has been bought by James McCulloch, founder of Harcourt Inns, and it’s getting a big redesign next year. The makeover will include an extensive refurb of the ground floor, turning it into a new all-day bar and restaurant, so watch this space for more.