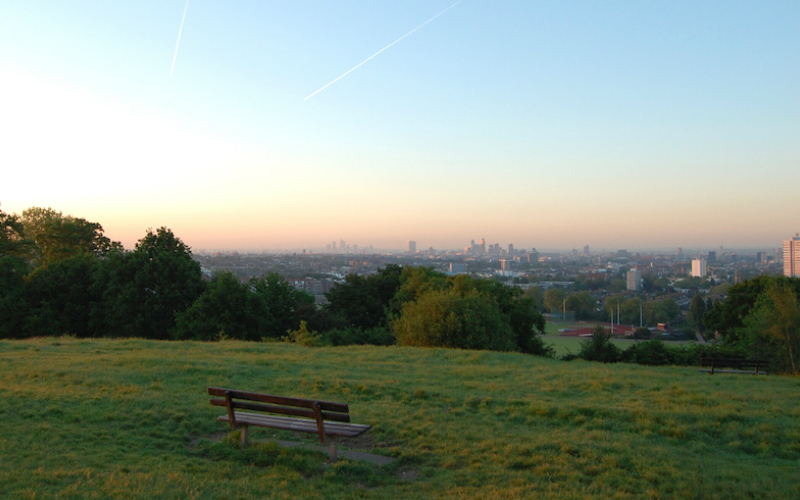 As well helping you get those steps in, walking in London gives you the chance to discover new parts of the city you’d never be able to see on public transport, and best of all, it’s totally FREE. From strolling along the river to admiring some public artwork to exploring ancient woodlands, these are eight of the best London walks.

This 4.5 mile stretch between Finsbury Park and Alexandra Palace is a local nature reserve and passes through some of the greenest areas in London. It follows the route of an old railway line, which is mostly demolished save for a few parts that can be seen through the trees. Now overgrown with plant life, the walk is great way to spend an afternoon!

London and Essex share joint custody of this EPICALLY sized forest, which is actually the biggest wooded area around the capital. With just under 6,000 acres of trees, rivers and lakes, there a lot of trails to explore. From the Chingford end, you can do a loop from the Queen Elizabeth Hunting Lodge, built by Henry VIII, up past Connaught Water to Strawberry Hill Ponds before circling back round. From Theydon Bois there’s the Oak Trail, which is just under seven miles. That circuit will take you just over the edge of the M25 and back past the remains of an Iron Age fort at Ambresbury Banks and a deer sanctuarty.

The canal, which runs from Paddington to Limehouse, is just under nine miles, and with plenty of places to stop off along the way you can spend a whole day doing the lot. One of the best sections is from Little Venice to King’s Cross. This takes you through Regent’s Park, where you’ll get a view of some of the animals at London Zoo, and then into Camden, where you’ll get a view of lots of tourists. Carry on through St Pancras Lock, past the gasholders and onto Granary Square, where you’ll spot the green steps, the Word on the Water floating bookshop, and lots of places to stop for food.

The Tide is a linear park on Greenwich Peninsula; it’s a stretch (which’ll eventually be connected to a 5km loop) that features 9m-high elevated walkways, timber-decked bridges, and ‘stepping stones’ all lined with native trees and wildflowers. The route is also home to public artworks, including sculptures by Damien Hirst and Allen Jones.

Doing a loop around the heath is a great way to stretch your legs as you will have to go uphill for at least part of the walk. Start by Parliament Hill Lido and head up, stopping to take in those mega views from the top of the hill, and then walk past the bathing ponds and all the way up to Kenwood House. Spend some time exploring the grounds (time for your best Hugh Grant and Julia Roberts impressions) before you head back down the heath.

It may be known as the spiritual home of Sunday league football thanks to over 80 full-size pitches, but you don’t need to be kicking a ball around to enjoy the space. Start at Wick Woodland and do a circuit, following the Lea Canal up to the Middlesex Filter Beds Nature Reserve before walking back down along the River Lea, passing New Spitalfields Market. If you’re not ready to call it a day after that, the Olympic Park is just over the road.

Calling all nature enthusiasts! Walthamstow Wetlands is the largest urban wetland in Europe, with 10 reservoirs and 13 miles of pathway to explore, as well as an abundance of wildlife awaiting, including grey heron, tufted duck and wildfowl. Who knows what else you’ll find along the way…

Take in both sides of the Thames with this West London riverside loop that runs through Chiswick, Barnes and Hammersmith. Obvs you can start at any point on the circuit but we like beginning from Chiswick Bridge on the north side of the river, walking along to Chiswick Pier (the 65 acre gardens of Chiswick House make a great detour) and past Chiswick Eyot, which is the rough halfway point of the Boat Race. Once you hit Hammersmith Bridge it’s time to cross the river and head back west through Barnes, passing the Leg O’Mutton reservoir (look out for herons) and Barnes Bridge.