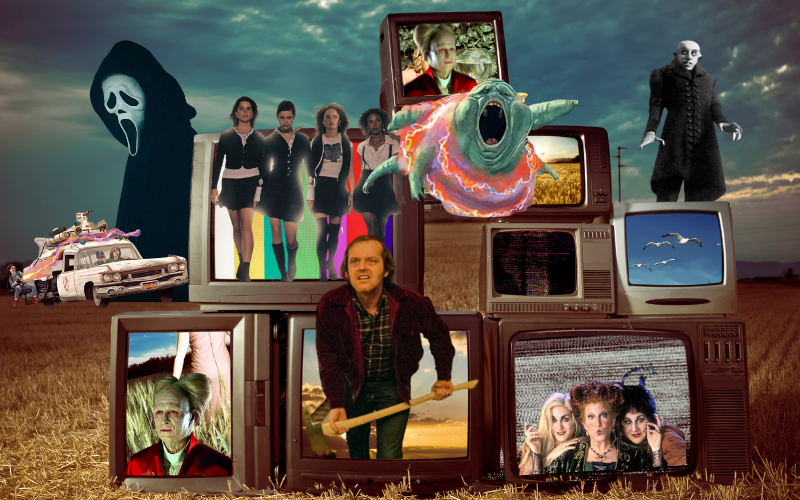 Evil creatures are cropping up all over the place right now, and it’s not just because Halloween’s coming up. If you, like us, prefer your blood-sucking vampires and malevolent spirits safely confined to the screen, here’s where to find scream-ings of some of the best Halloween movies of all time.

The Craft at The Prince Charles

One of the most iconic witch movies of all time, you can catch The Craft at The Prince Charles cinema in Soho this month – be sure to come dressed in your finest whimsy-goth fit.

Even if only from that one episode of Spongebob, you’ll have heard of Nosferatu. The 1922 German Expressionist film is a certified horror classic and it’s on at Genesis this Halloween, along with a live re-score by experimental music croup GROK.

The Shining at the Rio

The Shining, one of the greatest horror movies ever made (who cares what Stephen King thinks), is playing at the Rio this October. The screening comes as a celebration of the release of The Shining: A Visual and Cultural Haunting by Craig Oldham and will be accompanied by a panel discussion with Oldham himself, Ella Kemp, Cosey Fanni Tutti and Gavin Turk.

For its 30th anniversary, Bram Stoker’s Dracula is coming back to cinemas with a 4K restoration. If you’re a fan of Coppola’s bizarre and fascinating take on Dracula, it’s showing at Chiswick Cinema on the 10th of October.

A Halloween fave (especially for anyone not that into horror movies), Hocus Pocus is showing with open-air cinema specialist Adventure Cinema at Osterley Park and House. This one’s likely to sell out, so grab tickets while you can.

Ghostbusters at the Castle Cinema

It gave us the iconic Ray Parker Jr song and breakout stars like the Stay Puft Marshmallow Man and Slimer – Ghostbusters is definitely a Halloween staple. And now you can see it on the big screen at the Castle Cinema this spooky season.

Scream and A Nightmare on Elm Street at Electric Cinema

You can knock two off in one go with the double feature at Electric Cinema this month which’ll be showing Wes Craven’s horror classics Scream and A Nightmare on Elm Street back to back.

The Wicker Man at The Garden Cinema

The Wicker Man walked so Midsommar could run. The cult classic that helped define the folk horror genre is showing at The Garden Cinema this month, presented by the Zodiac Film Club who’ll be hosting tarot readings and serving up mulled cider at the bar.

The Rocky Horror Picture Show at the Clapham Grand

It may have been a flop when it was first released, but nearly 50 years later The Rocky Horror Picture Show is still packing cinemas every year and taking prime spots on the box office charts. You can catch the musical/horror/comedy phenomenon with a special screening at the Clapham Grand – including dance-offs, sing-a-longs, cauldron cocktails, and an after party.