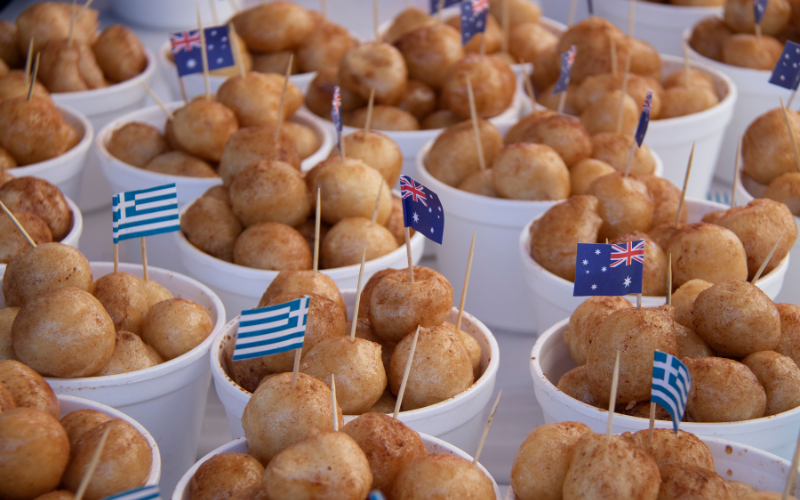 Eurovision gives us a look into the pop culture and music scene of the contesting countries, but we also wanna peek into the kitchens. Europe is home to several culinary hotspots – France, Italy, Spain – but what about the lesser-known delicacies of the continent? Between sweet cakes made of pasta and mega sandwiches, there’s a lot to discover, so we’ve rounded up the most notable, fascinating and (quite) bizarre dishes from some of this year’s semi-finalists. And don’t forget to join LOTI A.M.C where you can predict the Eurovision results and win big.

One of Latvia’s best-known culinary inventions are piragi, little crescent-shaped pastries filled with bacon and sauteed onions. They’re often enjoyed at major celebrations, particularly Christmas, but can be found at street food stalls, restaurants and bakeries. Despite their ubiquity in Lativia, they’re quite tricky to get your hands on here in London, but you can find them at Lativian Baked Goods in Tottenham.

For the morning after a night on the horilka (Ukrainian vodka), soljanka is a thick soup that dates back to the 15th century and is touted as being the ultimate hangover cure. Made with either meat, fish or veggies, soljanka is also known as being an ‘everything but the kitchen sink soup’ that you can throw everything into. Common ingredients include salty cured meats, sausages, olives, capers, pickles, cabbage, and carrots in a beef-based broth. Try it for yourself at the Ukrainian resto Albina.

For all you dessert lovers, Greek loukoumades will be right up your street. Greece’s answer to doughnuts, the deep-fried dough balls are piled up like profiteroles, soaked in a hot honey syrup and served with chopped walnuts or toasted sesame seeds. In Greece they can be found at coffee shops and street food vendors, in London they can be found at Aroma Patisserie.

Maybe not the most exciting Swedish dish, but def the most renowned are Swedish meatballs – what trip to Ikea is complete without a portion of these babies? The meatballs are seasoned with cardamom and nutmeg and covered with a rich, creamy gravy (though more traditionally they’re served sauce-less). Of course, you can pick these up at an Ikea, but if you want to amp it up a bit you can grab a dish of the meatballs served with lingonberries, pickles, mashed potato and half a poached lobster at Scandi restaurant Aquavit.

Open sprat sandwich: not an insult, an Estonian favourite! Known as kiluvõileib, buttered rye bread is topped with a marinated sprat (a small fish in the herring family) fillet, green onions and fresh herbs, finished with a poached or hardboiled egg on top.

Printsesa is a classic Bulgarian fast food – a single slice of white bread topped with a mix of eggs and yellow kashkaval cheese, or with minced meat seasoned with herbs and onion, that’s baked until crispy. At street market stalls they’re often finished off with ketchup and mayo.

Kaiserschmarrn (meaning ‘emperor’s mess’) is a caramelised pancake that’s shredded while frying and then served with powdered sugar and apple, plum or other fruit sauce. It’s a historic delicacy that was a favourite of Austrian emperor Franz Joseph I, which is where it gets its name. A Franz Joseph Kaiserschmarrn with cherry compote can be found on the menu at Fischer’s in Marylebone.

The francesinha is a monster of a sandwich, huge and filled with layers of steak, cured meat, sausages and topped with cheese (sometimes an egg too), covered with a beer sauce, then served surrounded by French fries. It’s commonly found in Porto caffs being eaten by customers making hungover-fuelled choices. They’re quite elusive here in London, but you just might be able to catch on at O Cantinho De Portugal in Brixton.

Two comfort foods mashed into one, stonksa torta a cake made of pasta and (as much as it may look savoury) it’s a Croatian dessert. hailing from the port of Ston, part of Croatia’s Pelješac peninsula, the cake is made using makaruli pasta (like tortiglioni) layered over a base of pastry in a cake tin and mixed with a fragrant mixture of ground almonds or walnuts, grated chocolate, cinnamon, and lemon zest. The pastry is then sealed over the top, baked and often topped with powdered sugar and berries.