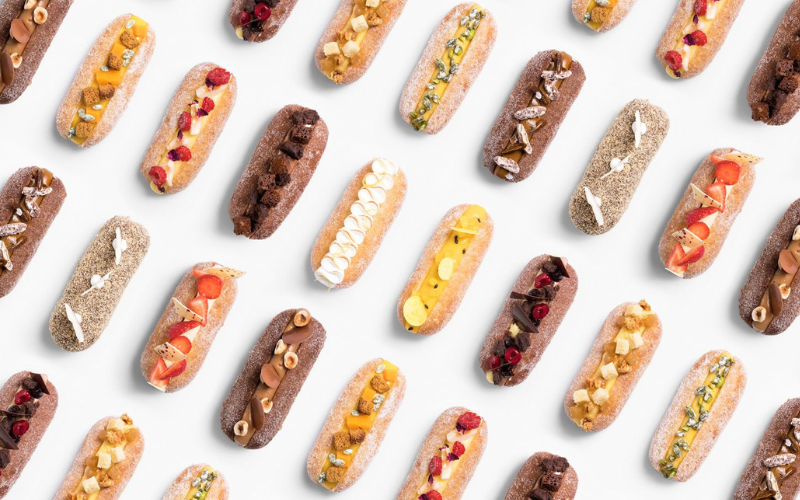 All you sweet-toothed Londoners eagerly awaiting your next sugar hit, rejoice! It could come sooner than you think. The online dessert delivery game has never been stronger, and you can now get all the pies, brownies, cakes and cookies you like (and in some wild flavours too) at the click of a button. So, if you’re not the type to say no to the dessert menu, these are dessert deliveries you need to have on your radar.

Chez Ella – A relatively new baker on the block, Chez Ella is run by Le Cordon Bleu Grand Diplôme graduate Ella Harding who specialises in bespoke cakes that deliver on both appearance and taste. The small but highly refined menu of flavours includes classics like strawberries & cream and chocolate and caramel, with some more specialist flavours like pistachio and raspberry & almond on the list too. Each cake is made to your requirements, with the option to add lots of personal touches and designs that range from minimal to kitsch and rococo. Marie Antoinette would approve.

Crosstown – You might know them from being one of the first players in the London artisanal doughnut game, but Crosstown has also branched out with a range of thick af cookies. There are three flavours to choose from; chocolate chip (with a mix of top-qual milk and dark choc chips), peanut butter and chocolate chip (with dark roasted peanut butter) and oat and apricot (with sweet dried apricot pieces and bitter dark chocolate chips). Boxes of six or twelve are available online for nationwide next-day delivery. You can also cop individual cookies if you happen to be passing the store too.

Lola’s Cupcakes – Lola’s have been turning out some of the best cupcakes in the game for years but now they’ve stepped things up by nationwide delivery. You can get all the classics, like red velvet, banoffee and cookies & cream, as well as chocolate, fruity, vegan and gluten-free cupcakes, through the post in boxes of eight. Cupcakes for everyone!

Cake or Death – It’s hard to miss Cake or Death’s hot pink leopard print brownie packages coming through your letterbox – we think they do that on purpose, to make you want to rip open the box and devour all six when they arrive. The fudgy, indulgent brownies come in a variety of flavours and also happen to be vegan (and most varieties are gluten-free). Whether you’re after a classic sea salt flavour or fancy mixing things up (literally with a mixed box) with the Biscoff and salted caramel options, there’s something for everyone.

Doughnut Time – When the sweet treat pangs strike, it must be Doughnut Time. Now offering nationwide delivery, Doughnut Time has a range of boxes to choose from including the DT Classics, Happy Hour (vegan), Bruno Mars and David Hasselhoff, a vegan concoction of Lotus Biscoff cream, caramel and chocolate glaze. There’s also the Love At First Bite – a fluffy dough ball rolled in cinnamon sugar and piped with Nutella. We doughnut think this one’s worth missing out on.

Primrose Bakery – They might be famous for their cupcakes but Primrose Bakery do so much more than that. Their pies and tarts, including the traditional apple pie (custard or ice cream – which side are you on?), pumpkin pie, cookies & cream pie and chocolate peanut butter pie, are pretty mega. However, if you’re a cupcake purist then don’t miss out on their HUGE range of flavours like cookie dough, red velvet, coffee & walnut and loads more. If you’re in need of an after-dinner pick me up there are even cake versions of your fave cocktails. We’re down for the Negroni cupcake.

Big Mum’s Samosas – If you thought a samosa couldn’t possibly be a tasty dessert then you haven’t tried Big Mum’s Samosas apple pie masterpiece. Perfectly spiced apple sandwiched between two triangle-shaped layers of the crispiest filo pastry around served with a custard dipping sauce. What’s not to love?

Longboys – If you like them long and filled with cream then Longboys is the one for you. Created by an ex-Hakkasan pastry chef these are not what you would call standard finger doughnuts. Each brioche doughnut is made with premium-ingredient homemade compotes, sauces and glazes, with flavours like raspberry rose lychee, triple chocolate brownie, and strawberry & white chocolate to try. There’s also a rotating line-up of changing monthly specials to keep things fresh.

The Proof – If you fancy trying to eat as many profiteroles as you can in one go, you won’t be shamed by us. We’ve all been there. It’s kind of hard not to as well, because The Proof ones are something else. The choux buns come filled with Chantilly cream and with chocolate sauce, salted caramel, honeycomb and strawberries all on the side ready for you to assemble into a glorious dessert tower. They also sell classic desserts like lemon meringue tart, sticky toffee pudding, flourless chocolate cake and vanilla bean cheesecake. YUM.

The Exploding Bakery – The ‘letterbox brownies’ from The Exploding Bakery come in a handy flat pack so even if the postman catches you while you’re out, there will be fresh brownies waiting on the doormat for you when you get in. And there’s nothing better than a brownie after a run. There are 12 flavours to choose from as well as the option to add on candles, biodegradable balloons, gift cards, and even a bag of Round Hill single-estate coffee. They are all gluten-free and six of the flavours are vegan too. Our favourite has to be the Blood Orange, although the one made with Pip & Nut peanut butter also sounds like a banger.

Need a dinner delivery to go with your dessert? Here’s some new ones we’ve been loving.