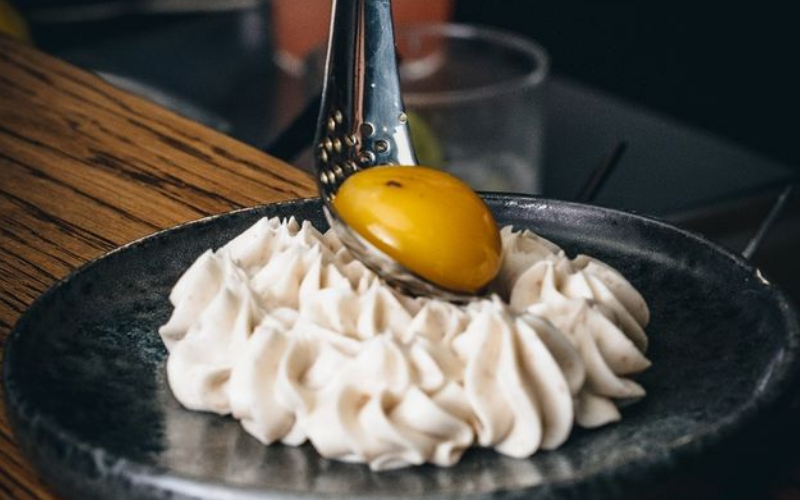 If your experience of taramasalata is unnaturally vivid pink tubs in the supermarket and the corner of the four-dip tray that always gets left well alone, it’s time to give the dish another go, because when it’s done right, cod’s roe is an elite-level ingredient – and there’s a TON of restaurants serving it up. Whether it’s alongside crudites or crisps for dipping, spread like butter on a flatbread, or piped on some potato there’s a whole host of ways to enjoy this rich, creamy, salty dip and we’re here for it. So much so, we’ve rounded up the best cod’s roe dishes in town…

Selin Kiazim doens’t do things by halves so you know when she puts tarama on the menu at Oklava it’s going to be special. Secret Smokehouse cod’s roe, crispy potato, pickled turnip, yes, yes, yes.

Smoked Tarama with Crudites at Mangal 2

Sometimes the simple ways are the best and that’s the approach Sertac Dirik is taking with his cod’s roe dish at Dalston’s Mangal 2. Smoked tarama with crudites for scooping/dipping, job done.

Clearly the guys at INO didn’t think taramas was creamy and indulgent enough already because they’ve pimped it right up with the addition of a slow cooked egg yolk and a healthy grating of bottarga. Just add pitta bread and you’ll be wiping the plate clean.

The restaurant may have rebranded, coming back post-pandemic as FKABAM, Formerly Known As Black Axe Mangal, but Lee Tiernan’s signature dish of squid ink flatbread, smoked cod’s roe and egg yolk remains and it may even be better than before.

We know, we know, The Bridge Arms is most definitely in Canterbury and not in London but it’s one of our fave pubs in the country ( and within very easy reach of the capital) so if you find yourself on a day out down there, start your meal the right way with this whipped cod’s roe and linseed crackers.