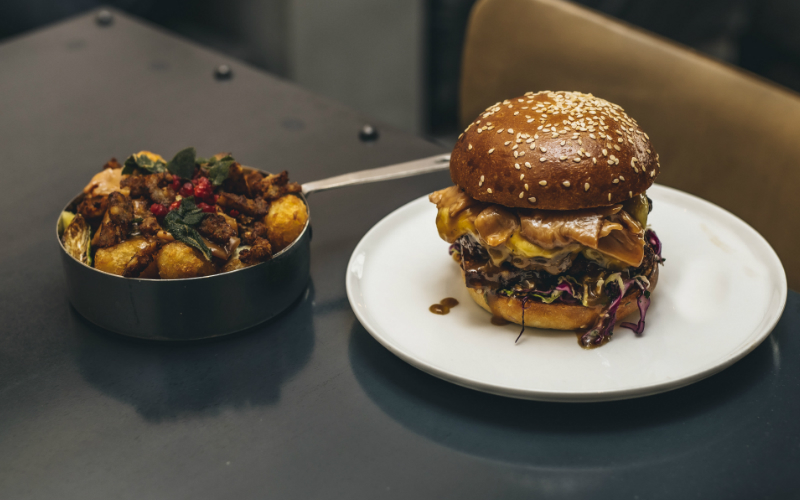 We love a good Christmas sarnie but this is the time of year where anything goes, and not just between two slices of bread. Every Christmas, London restaurants and foodies go all out to make the best festive specials they can, so we’ve rounded our faves of the season so far. Read on for the best Christmas food specials in London.

Yard Sale Pizza has teamed up with its new Hackney Road neighbours, Jon Rotheram and Tom Harris at The Marksman, for an amazing Christmas special: Yard Sale’s signature double-fermented dough base will be topped with Cotechino (traditional Italian festive) sausage, thinly-sliced potatoes, crispy sage and plenty of Parmesan. £1 from each pizza sold will be donated to local homeless charity Hackney Winter Night Shelter.

Available at all Yard Sale Pizza locations until 6th January 2020

Available at all Tonkotsu locations until mid-January 2020

On sale from Thursday 5th December exclusively at at Dinerama, this beauty from Tucka Burger takes their aged beef patty and adds a pig-in-blanket patty on top, plus brie, American cheese, cranberry sauce, pickled brussels, and mayonnaise. Priced at £11.

How do you make a burger Christmassy? Whack in a load of cranberry sauce and a massive wodge of deep-fried camembert of course. Honest Burgers has also nestled some smoked bacon in there along with rocket, because you need to eat your greens.

Available at all Honest Burgers until Tues 24th December 2019

Not content with piling sausage meat, maple turkey bacon, red cabbage, raclette cheese, sprout slaw and turkey gravy on top of a burger, Burger & Beyond has also given its tater tots a festive makeover. These are loaded with cheese curds, turkey bacon, sausage stuffing, crispy sprouts, cranberries and gravy.

Available from Burger & Beyond from Sun 1st December 2019

Tucking into a messy, all out, indulgent Christmas burger doesn’t have to mean eating meat. Oh no, the mighty Biff’s Jack Shack has a crispy fried jackfruit burger to out most regular burger joints to shame. The Santa’s Little Helper sees their signature crispy fried jackfruit patty topped with spiced vegan meatloaf with roasted walnuts and dried cranberries, smoked cheese, smoked sprouts, spiced cranberry gel and a porcini gravy dip on the side. It’s priced at £9.50 and £1 from every sale will be donated directly to Serbia’s Forgotten Paws, an incredible independent animal sanctuary.

Twisted London’s delivery-only kitchen has come up with something suitably ‘out there’ for its Christmas offering. The Santa’s Little Dunker is a limited edition pizza with a BBQ base and mozzarella cheese, topped with pigs in blanket, pork stuffing balls with sage and onion, and chargrilled brussel sprouts, finished off with a drizzle of cranberry sauce. But wait, there’s more. A giant Yorkshire pudding is placed in the middle which you then pour turkey gravy into for dunking your pizza slices. Or go a step further – if you’re ordering this you might as well – and go for the turkey tenders too, which you can also dunk into that gravy. You could even wrap a pizza slice round it to be honest. So wrong it’s right, or just plain WRONG – the jury’s out on this one.

Available via Twisted Slice on Uber Eats until 22nd December

Given how well they handle big cuts of meat, it’s no surprise that Blacklock do a great burger, even if they do hide it away off the main menu. Naturally a Blacklock Christmas burger is going to be something worth tucking into – it’s a Christmas-spiced, charcoal-grilled turkey thigh topped with a sausage and onion patty, Middlewhite bacon, cranberry ketchup and greens. Yes please.

Available at all Blacklock sites.

The mince pie meets the naan at Cinnamon Bazaar. The classic bread has been stuffed with CB’s homemade mincemeat, a mix of dried fruit, nuts, dark rum, red wine, brandy and garam masala, and you can make it extra festive by adding a scoop of cinnamon ice cream on the side.

Available at Cinnamon Bazaar until end of December.

Available at Giant Robot and Dinerama until 20th December

Homeslice really have gone all out for this festive pizza – confit goose leg, goat’s cheese, fior de latte, shaved brussel sprouts, blackberries and redcurrants on a bread sauce base. It even comes with a Christmas gravy drizzle. DROOL.

Available at all Homeslice locations.

Bread Ahead are the London’s doughnut kings and they’ve got a beautiful creation for Christmas, available now at all their stores. The Panettone Doughnut consists of a creme patissiere combined with orange and lemon zest, mixed peel and raisins, stuffed into one of their classic fluffy doughnuts and topped off with an almond sugar disc.

Available at all Bread Ahead locations

We’ve seen battered mince pies and even battered sprouts, and now it’s the turn of Quality Street. Yes Poppie’s is battering everyone’s fave Christmas choccies at its Soho chippy, with a lucky dip selection of five deep-fried Quality Street costing £2.50. If you’re eating in the shop, you can even pre-order the full range.

Can’t decide between brunch or Christmas dinner? With this Stackmas creation at The Table you don’t have to. It’s three bagels layered up with chorizo and ham hock beans, a pan-fried stuffed turkey roll, pigs in blankets and poached eggs. And if that wasn’t quite enough, you can smother it all in a cheese sauce.

Available at The Table until 24th December 2019.

BaoziInn is putting a Chinese spin on a turkey sarnie this Christmas with fried turkey, cranberry mayo, dried apricot, peanut and coriander stuffed into a bao bun. It’s £7.50 for two and they’re not around for long so you’d better move quick if you want those festive baos.

Available at all BaoziInn locations from 18th – 23rd December. 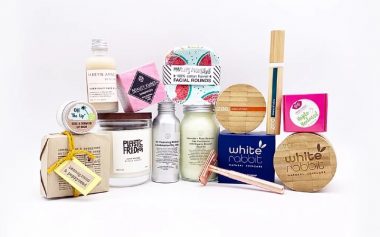