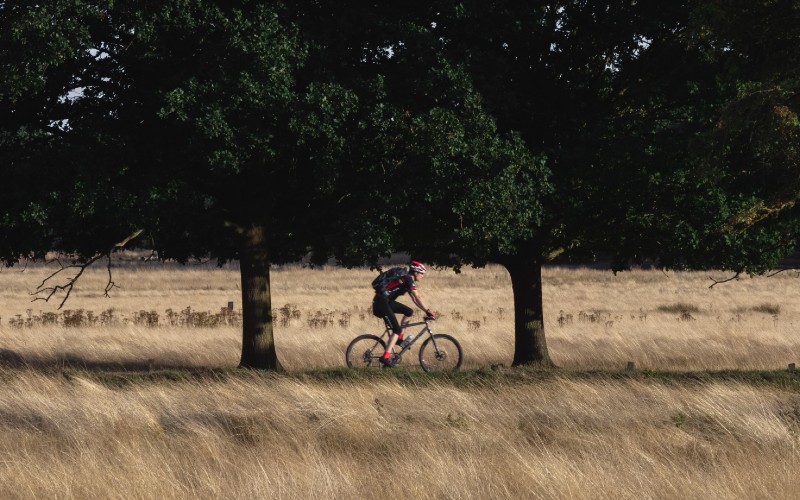 If you’re looking for a quick way to get around and avoid public transport, two wheels – whether your own or a Santander rental – is how to do it. Not only are you out in the fresh air (and exercising) on a bike, it lets you see the capital in a whole new way. From cutting through the middle of town along the canal to exploring some of the city’s nature reserves and green spaces, these are the best bike rides in London.

Though there’s lots to explore in the middle of Richmond Park, the road that loops around the edge is the draw for cyclists. The 7-mile route has a mix of gradual inclines and sharp climbs, so prepare for a workout – if you’re quite new to cycling, going clockwise will help you avoid ascending the steepest hill. Keep an eye for the deer as well!

The canal, which is also a one of the best walking routes in the city, can also be done on two wheels and with that extra speed you can easily cover the whole nine miles. Obviously you can go in either direction but if you go east to west, starting from Limehouse and going through Mile End Park, Hackney, Angel, King’s Cross, and Regent’s Park (with a view of the animals), you can finish in with a waterside bevvy or two in Little Venice.

The route from St James’s Park to Kensington Gardens takes you through four royal parks and past a couple of palaces too. Follow the edge of St James’s Park up The Mall to Buckingham Palace and after you’ve checked to see if Her Maj is in, go up Constitution Hill through Green Park, then under Wellington Arch and into Hyde Park. There are lots of cycling routes here so you can meander into Kensington Gardens whichever way you choose.

This 14-mile trail follows the River Wandle from the point where it joins the Thames at Wandsworth down to Croydon. It’s a flat, easy route and it goes through numerous nature reserves and parks (with a great stop-off point at Merton Abbey Mills if you need to refuel), so it’s a perfect escape from the hustle of South London.

Tower of London to the Big Ben

You can see a load of London landmarks on this route, no open-top bus required. Start from the Tower of London and follow Cycle Superhighway 3 and you’ll pass the Monument, and the Shard, Shakespeare’s Globe and the Tate Modern across the river. The route skirts the river along to Somerset House – with the London Eye and South Bank opposite – before hitting Big Ben. If you’re not ready to stop, you can carry on through the parks all the way to the Serpentine.

The River Lea runs all the way from Bedfordshire down into the Thames but if you don’t fancy taking on the whole thing, there’s a great, and more manageable 12-mile stretch, in the Lower Lea Valley. Start by the Olympic Park and follow the water north, passing Hackney Marshes, the edge of Walthamstow Wetlands, and into Tottenham Marshes before looping back round and down.