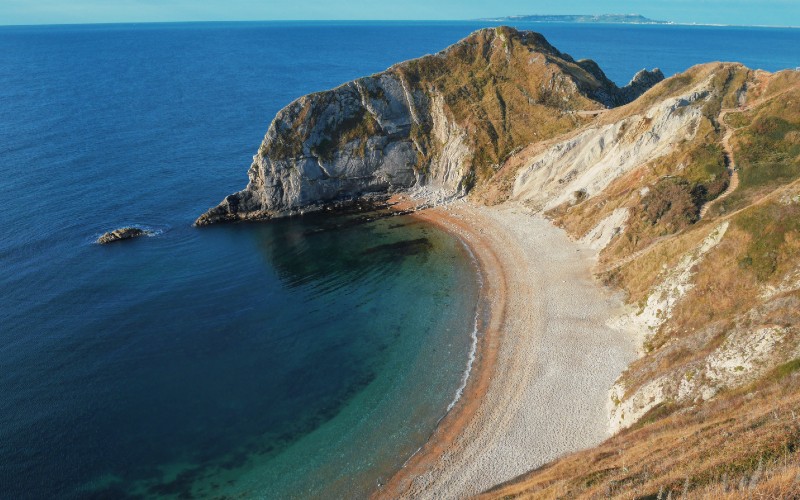 We may not have the uninterrupted blue skies and high temperatures of Barbados or Bali but the UK is home to some beautiful beaches, and the sun has been known to come out from time to time. Oh we do like to be beside the seaside…

Who needs a vacay to the Arabian desert when a trip to Camber Sands is on offer? The miles-long wide beach and stunning sand dunes make it great for long walks, and you’ll have plenty of space to splash in the shallows.

This stretch of Dorset’s Jurassic Coast got splashed all over the media recently thanks to crowds of sunbathers flouting social distancing rules on the beach. Durdle Door is a big attraction – the limestone arch that separates St Oswald’s Bay and Man O’War Cove is spectacular but you’ll have to head down (and back up again) several hundred steps to get to it.

With white sands and turquoise waters, you could be mistaken for thinking you’re on a tropical island, and the Isles of Scilly also have their own micro-climate which means they are a little hotter than the rest of Britain. If you don’t want to lounge on the sand, it’s a great beach for water sports and at certain times of the year, you can walk between the islands. Fresh seafood is in abundance too.

Remember when Gwynnie walk along a beach at the end of Shakespeare in Love? That’s Holkham Beach. As well as a long stretch of unspoiled golden sand, the beach is part of a nature reserve so there’s plenty to explore.

The Gower Peninsula is home to one of the most beautiful stretches of coastline in the UK. As well as being picture perfect thanks to a long curve of sand framed by rugged limestone cliffs, Rhossili Bay is also a good spot for surfing.

Cornwall is blessed with great beaches, like Portcurno right down in the south west of the county. It’s a relatively small bay but the water is beaut – dolphins and and basking sharks have even been spotted down there. The cliffs shelter the beach and there’s even an open-air theatre up there.

Formby has dramatic sand dunes that move several metres every year, meaning prehistoric footprints have been revealed there, and the woodlands by the beach are also home to the rare native red squirrel. Not only do you get views over the Irish Sea, on a really clear day you can see out to the mountains of Cumbria.

Not to be confused with Blackpool up north (it’s also made of small pebbles rather than soft sand), this Devon beach is sheltered, super clean and has wonderful water, making it a popular spot for both swimmers and sunbathers.

This mile-long golden beach is one of the most beautiful in the North East. It’s a great walking spot, it attracts sunseekers when the weather is good and it’s a popular surfing destination, having staged national surfing championships.

Jura, an island in the Inner Hebrides, is one of the wildest places in Scotland – only around 200 people live on it (George Orwell spent months on the island to write 1984) and it’s rugged coastline is home to lots of wildlife, including seals. Corran Sands is the best beach on the island and with so few people around, you’ll likely have it all to yourself.