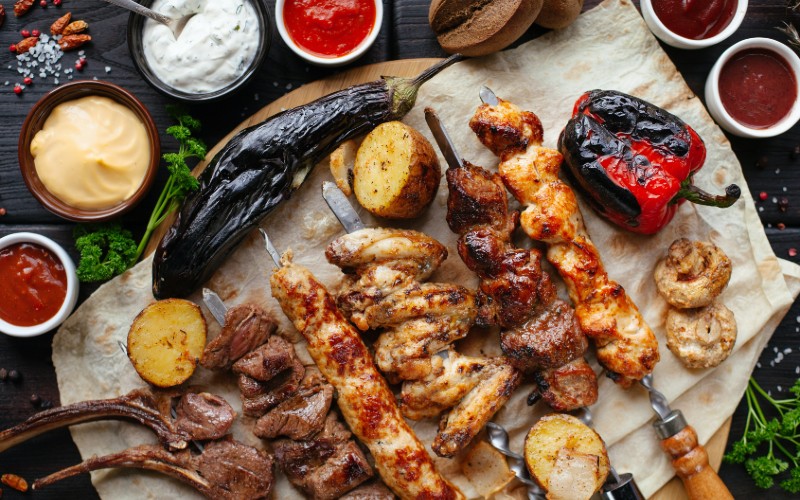 Summer is almost upon us and that means one thing…it’s time to fire up the BBQ. Whether you’re grilling on a proper barbecue in your own garden or you’ve got to make do with a disposable number balanced on your balcony, you don’t have to settle for pack of supermarket burgers and some plastic cheese, not when you can these epic BBQ boxes delivered to your door.

You’re gonna want to fire up the barbie for this meaty Dirty Bones’ BBQ box which features a line up of buffalo hot wings; chipotle chicken thighs; yankee dogs; sweet and sour baby back ribs; and the Dirty Bones’ lamb ‘fries’ potato salad. That’s right, it’s a proper backyard party in a box. And if the weather doesn’t play ball, bring this feast inside because it’s just as perf in the oven too.

Dukeshill is known for luxury fine foods (they have a Royal Warrant to the Queen for their cured hams) so if you want to take your BBQ up a notch, the Family BBQ Box is the one for you. Feed a crowd with pork sausages, sirloin steaks, free-range pork chops, West Country beef steak burgers and piri piri chicken kebabs, with burger buns, Mississippi rub and Memphis BBQ sauce to complete the meat feast.

Get the best of both worlds with this Surf and Turf box from Mr Wilde, the home dining offshoot of restaurant Walter and Monty. The surf is wild Atlantic lobster with lemon & garlic butter and the turf is a giant tomahawk steak, with padron peppers, roasted new potato salad, grilled lemons, lime aioli and chimichurri on the side. Best of all, all the hard work is done for you by the Mr Wilde chefs, so you just have to finish it off – easy steak and lobster is just the way we like it.

Take a trip to Thailand via your BBQ with this spesh box from HG Walter, which combines the butchers’ top quality meat with South East Asian flavours. Whack the pork moo ping skewers, Chiang Mai sausages, marinated poussin and sirloin steaks on the grill and then spice it up even more with the nahm jim dipping sauce and Thai-style pork scratchings.

Bring a bit of Spain to your backyard with this Asador BBQ & Fire Box with Estrella Galicia. There are tapas dishes like boquerones, Gordal olives and lomo Iberico for you to snack on, with paired Estrella lagers, before you move onto the main spread, which includes roast pork rib, chorizo, presa Iberica, coal roast new potatoes and coal roast asador peppers, with more Estrella Reserva to sip on.

The meat-obsessed chef Gareth Ward has teamed up with StarChefs to create a barbie experience like no other. Taking inspo from his Michelin-starred restaurant Ynyshir, this BBQ box features the likes of beef wagyu with black bean sauce and green pepper mayonnaise; barbecue duck hoisin, spring onion & cucumber salad with spring onion oil; and glazed miso black-cod with shitake and bao buns. Better still, it comes fully prepped and just needs to be finished off over the fire.

Farmison & Co has teamed up with Arabica for this limited edition BBQ box that combines the best British meat with ingredients of the Levant. The box includes 7 spice chicken wings, lamb koftas and heritage breed bavette steak plus green zhug, za’atar, tahini and orange blossom water from Arabica so you can add that extra hit of flavour to the meats, and Persian flatbreads for mopping up all the juices.

If you like a meat feast on the BBQ, look no further than The Ethical Butcher. The retailer works with farmers who use regenerative agriculture techniques to improve biodiversity and the meat they sell is free-range and of the highest quality. The Unlocked BBQ Box includes everything you need for an epic spread, with chicken lemon za’atar kebabs, GROUND burgers, Bovis sausage, lamb loin chops, chicken drumsticks, mixed herb and cheddar & chive pork sausages, and pork cutlets. If you want something smaller, they’ve got a BBQ Basics Box and if you’re having a party, you can go bigger with the Ultimate BBQ Box.

Spice up your summer BBQ with this new meal kit from Hoppers. It’s got curry leaf & yoghurt prawns with black pepper sauce, mustard chicken & kari sauce, banana leaf bream, Jaffna lamb chops with lemongrass chutney and corn on the cob to grill, plus carrot sambol and roti on the side, Jaffna mix to snack on, and Wattalapam cheesecake for pud. That lot beats a burnt burger any day.

Take your BBQ game to the next level with this box from Provenance Village, London’s modern family butcher. This one’s got a T-bone steak, two ribeye steaks, herb & garlic chicken, two lamb neck skewers, six beef burgers and a pack of old English sausages too. Blimey. Oh, and a bottle of Prairie Fire BBQ sauce to slather all over that meat too. And if you’re looking for a regular fix, these guys also offer a monthly BBQ Club Box (as well as same day delivery).

Berenjak are making at your BBQ an absolute breeze with this ultimate kit that brings together the best of their OG Kabab Kit, Kabab e Tond Kit, and Mazeh Box. It features the likes of lamb koobideh kabab; coal cooked aubergines; chicken mayo salad with potato, egg, salted cucumbers and black truffle; clay-baked lavash bread and so much more. Get ready for a flame-ing good feast.

If you want to nail cooking over fire, you need to make sure you’ve got the right raw materials. Enter the Starter Bundle from Woodsmith. It’s got unrefined lumpwood charcoal, smoked applewood chips and British-made eco firelighters so you can get your BBQ burning just right, plus two rubs – a spicy one and a smoky one – so you can get even more flavour into your meat, fish or veggies.