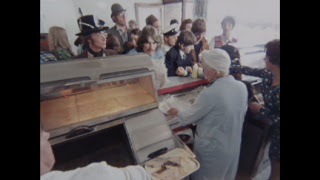 The Arena Hotel is a ground-breaking online project for The Space, the new digitalarts service developed by the Arts Council in partnership with the BBC who have just been granted unique access to some very special unseen footage of the Beatles during the making of a documentary about their 1967 film Magical Mystery Tour and is showing it exclusively at The Arena Hotel at thespace.org


this Saturday 6 October at 21.45 on BBC Two, Arena: The Beatles’ MagicalMystery Tour Revisited presents a new documentary which reassesses the artisticmerit and cultural significance of the film before treating viewers to the digitallyremastered full length Magical Mystery Tour – for the first time in 33 years.