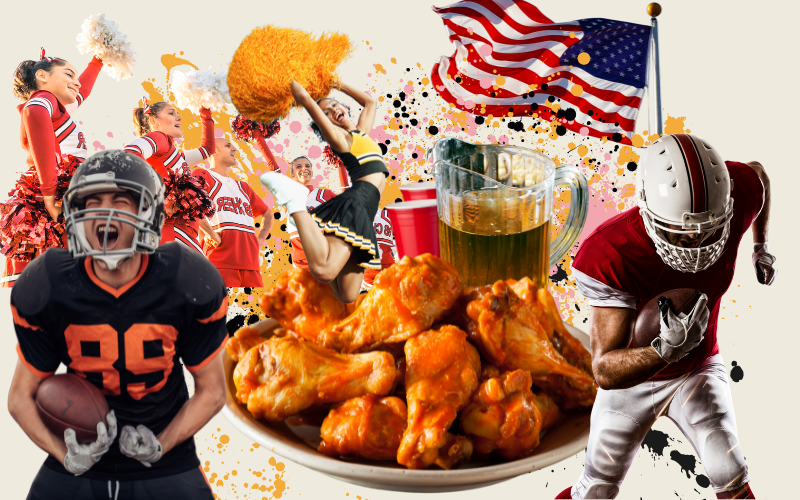 Whilst we may not be American and we may know that a football is actually round and not a brown rugby ball rip-off, we do love any excuse for a party and they don’t come much bigger than the Super Bowl. Yes Sunday 13th February is game day; it’s Rams vs Bengals; Los Angeles vs Cincinnati: Dr Dre, Eminem, Mary J Blige, Kendrick Lamar AND Snopp Dogg vs half-time. So whether you’re a big football fan, in it for the wings or you just really want to stay up late on a school night, we’ve got the best places to watch Super Bowl 56 right here in London.

Greenwood will be showing the big game across all their huge HD screens in the main bar downstairs plus more in the premium sports lounge upstairs. That’s a lot of coverage. They’re keeping the action going all night long with classic American grub and lots of beer, and there are a range of ticket types from a standing ticket right up to guaranteed seats in view of the screens with bottomless wings.

The Clapham Grand always puts on a mega Super Bowl party and this year is no different. They’ve got lots of big screens scattered around, so all angles are covered, as well as all the stadium paraphernalia, including confetti cannons, giant foam hands, and even their very own cheerleading squad. The Clapham Grand has also drafted in Thunderbird Chicken to take care of the food, so there’ll be wings on wings on wings.

Skylight will be screening the game on its five indoor and four outdoor screens, so there’ll be plenty of space for your crew to watch the game. There’ll be lots of pitchers of beer and a whole host of American grub like wings, chilli beef nachos and burgers on offer, with giveaways running throughout the night too so you could be in with the chance of bagging a £50 bar tab.

Party pub The Prince will be hosting their biggest ever Super Bowl Sunday event this year. The Prince will be decked out with loads of plasma screens and projectors to make sure all fans can watch the pre-game coverage and the on-field action whilst sipping on beers and scoffing chicken wings. It’s starting early and going on ’til late, so get ready for the long haul.

Celebrate the Super Bowl at Gibney’s Sports Bar, hidden underneath Richard Corrigan’s Old Street spot Daffodil Mulligan. The Irish chef will be creating a special Super Bowl menu to enjoy whilst watching the game with chips and three types of chicken wings – cayenne spiced with sour cream & chive, black pepper & sea salt with blue cheese dressing, and salt chilli with tarragon mustard – to be washed down with pricklebacks, sours, slammers and more.

You can touchdown at both BOXPARK Croydon and Wembley to watch this year’s Super Bowl action. Expect massive screens, DJs on the decks, a spot of beer pong, plenty of booze, giveaways and games (including MEATliquor’s triple chilli contest) all happening throughout the evening. And with traders including pizza slingers Fatto A Mano, Big Mike’s Calypso Kitchen and German Doner Kebab all staying open, you’ll be well fed too.

Signature Brew will be screening all the Super Bowl action on a cinema-sized screen at their Walthamstow Brewery. And not only do you get a FREE pint of studio lager with your ticket, but you can arrive anytime from midday too, so get ready for a long sesh. Expect brewery-fresh draught beer from just a fiver, 4-pint pitchers of lager and some all American grub (think wings and hotdogs) from the kitchen too.

Omeara is hosting a Super Bowl Sunday tailgate party under the arches of London Bridge this year and it’s gonna be hosted by NFL’s Inside The 5 podcast presenters. And as well as some pre-game analysis, you can expect Breddos Tacos to be slinging their street food faves with Omeara taking care of the bevs right through until early hours of the morning. Tickets cost just a fiver and include a FREE beer.

The American Bar at The Stafford

Head to The American Bar inside Mayfair’s swish The Stafford hotel to catch all the Super Bowl action on some big tellies. You’ll also be able to tuck into a menu of hot dogs, nachos and sliders, not to mention a whole list of American themed cocktails to wash it all down with. Tickets cost a tenner and include a regional craft beer, as you’d expect from one of London’s oldest American bars.