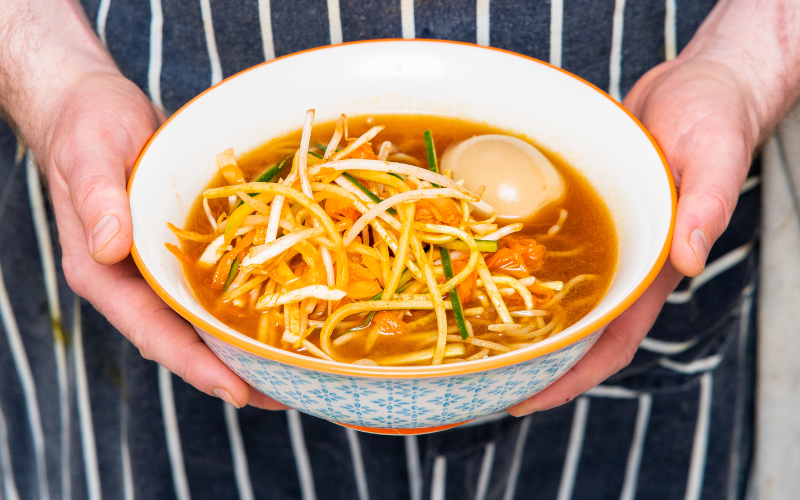 Cult ramen spot Supa Ya is finally heading south of the river, with a second site set to open in Peckham this month. Chef Luke Findlay (formerly of Berber & Q, Patty&Bun, The Hand & Flowers and NOPI) started the restaurant off as a super club until landing the first permanent spot on Kingsland Road for his new-wave ramen bowls in 2021. Just over a year later, he’s outgrown the 20-cover restaurant and is expanding with a second Supa Ya coming to SE15 within the next two weeks.

In keeping with the concept behind the OG, Supa Ya Peckham will be Findlay’s take on the classic Japanese ramen bar, serving up bowls with bold flavour combos and British influence. They’ll be introducing some brand new dishes to the brand new neighbourhood, including a ramen-burger hybrid, the Cheeseburger Mazesoba, which is made with a smashed burger patty, bread & butter pickles, American cheese and burger sauce. And, as we’re into autumn, an Autumnal Maple Glazed Pumpkin bowl will be a warming mix of sesame miso, green onions and Supa Ya Chilli Crunch. If you’ve already developed a taste for the Dalston dishes, don’t worry, some of the classics will be making their way down sarf too, including the Roast Chicken & Corn bowl and the Noodle Ice Cream with Miso Caramel. And there’ll be an all-new cocktail menu too, which will include reimagined classics like the Nori Old Fashioned and Pickled Fennel Martini.

Not long now until the eagerly awaited opening, with 26th October now announced as official launch day. But if you can’t wait until then, they’ll be soft launching from 21st-23rd October with all bowls available for just a tenner (instead of the usual £15) – but you may need to get in line.