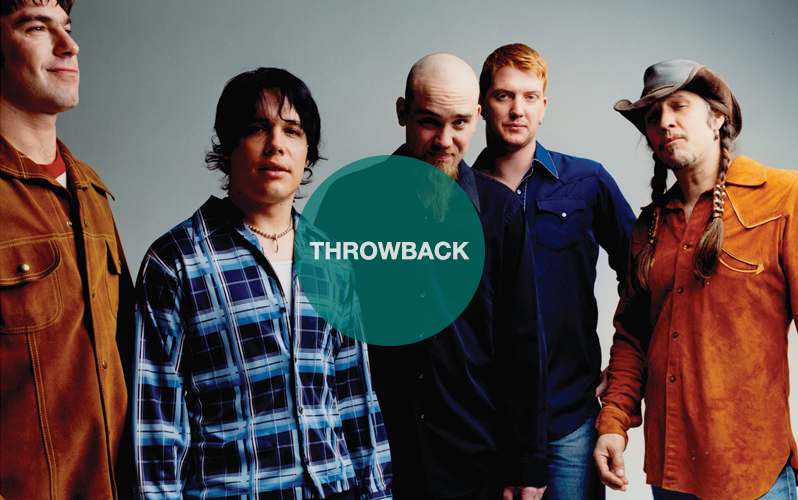 If you’re a rock music fan of any sort, then Homme is where the heart is. Not content with producing Iggy Pop’s recent album (it’s a stunner), he’s also found the time to produce the debut album by CRX, fronted by Nick Valensi, guitarist for The Strokes. He also (hilariously) turned up in Matt Berry’s sitcom, Toast. He’s versatile, has a very strong work ethic and is quite simply, a rock god. His main focus though has been Queens of the Stone Age, when not in Eagles of Death Metal, Them Crooked Vultures…

The classic, No One Knows appeared on their third album Songs for the Deaf, but for this Throwback, we’re going back to the dawn of the (Queens of the) Stone Age, with their raw, self-titled album from 1998. We All know by now that Joshua Homme is a fine purveyor of colossal riffs, and the album is liberally peppered with them. Regular John is a regular riot, a thundering riff arrives with a bassline revving in the background. His voice can be soft and strong at the same time, like a rock Andrex.

Every single tune has a riff that earworms you within a couple of notes. You Would Know features an almost Kings of Leon type drawl with a riff that is literally on a loop. Hispanic Impressions is a galloping duel between guitar and drums. You can almost sense Josh and drummer (co-writer) Alfredo Hernández egging each other on. Hernández’ drumming is everything a rock drummer should be…LOUD, HEAVY, but with enough variation to go beyond simply providing a backbeat, much like Dave Grohl (a frequent collaborator). Avon has a Metallica style drum intro and Josh plays a small but perfectly formed set of notes, jumping up and down the small scale.

On Walkin’ on the Sidewalks, the guitar squeals with delight and has that extra weight that the Zep and Hendirx carried. The drum intro to If Only sounds like Song 2 for a moment (but remember which came first!), and Josh fleshes out a mellower (yet still scuzzy sound) with some warm keys. The Bronze (sadly) isn’t a paean to the infamous club in Buffy, but a more uptempo number.

QOTSA is full of scuzzy feedback, atonal guitar, heavy sounds, BIG riffs, occasional touches of lightness and the merest hints of a groove that all swim around on an album that is ridiculously well-accomplished and sounds great today. After record company wrangling, it got his blessing for a 2011 re-release (with extra tracks). A chance to not wallow in nostalgia, but proudly reintroduce a lost gem to the world. Written by Homme. Produced by Homme. Lead vocals, guitar, bass, keyboard and piano by Homme. Yep. You can see why the line-up around him changes so much.  He’s one talented dude, and we will, guaranteed, always be salivating at whatever his next project is. Josh, we salute you.