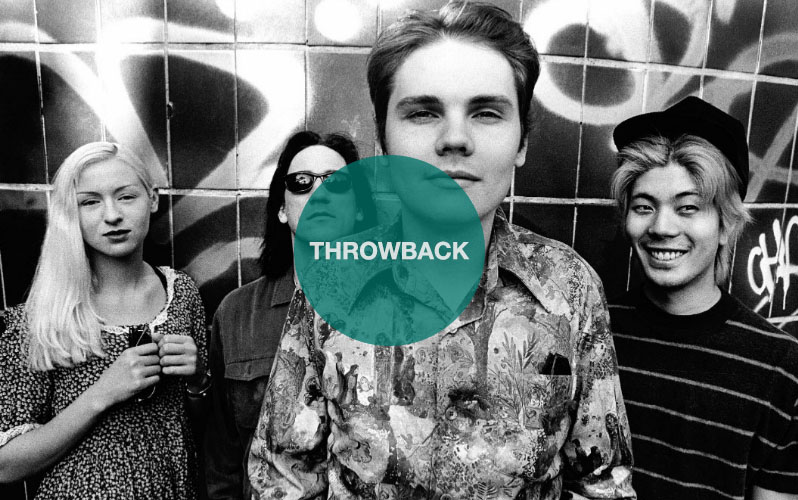 Summer’s nearly done and everything gets a bit darker, the 20-25 year classic album anniversaries keep rolling on, and it will soon be Halloween. Guessed today’s Spotify Throwback Thursday yet? Let us take you back to 1991 for Smashing Pumpkin’s Gish…a debut that shaped future efforts, with a band that hadn’t spectacularly imploded yet.

Thanks to Billy Corgan’s meticulous, heavyweight work tendencies, he and Butch Vig (Nirvana – Nevermind and a billion other awesome rock records) produced and recorded Gish for a modest $20,000 over a month of solid sessions, with Corgan playing bass and guitar. This was of course, after he’d formed the band (in its original incarnation) – James Iha (guitar), D’arcy Wretzky (one of two superbly talented female bassists that would be in SP line-ups – the world needs more!), and Jimmy Chamberlain (drums).

Of course, this was the original line-up, which would later be as fluid as a band rider until 2000 when Billy disbands (then tours under the name). However, as we’re celebrating the first album, it’s timely that he recently revealed that (coming full circle) he’s speaking to the original members. Bravo. Gish has it all. A BIG sound that grabs heavy metal by the neck, wanders on a psychedelic tip and has a subtle groovy flirtation with jazz influences (notably on the drums and bass).

It’s a curious beast, as down the line, you can hear all kinds of references/influences/similarities in the mix. Hindsight (and a lifetime listening to eclectic music) will do that for you. The quiet loud template is in embryonic form on the classic single Siva (which also feels like early Lenny Kravitz). Suffer has echoes of The Doors (John Densmore’s jazz inflected drums and that minor key guitar twang that adds drama and melancholy), and for the heavier moments a definite GnR vibe (Corgan and Iha are both equally adept as Slash – discuss).

Bury Me sounds like Flea from RHCP is paying a visit, and the swirling psychedelics of Rhinoceros hints at Jimi’s Axis Bold as Love. Also, hands up who doesn’t think that Snail could be an homage to Price’s The Cross? (Which actually, Billy acoustically covered this year in tribute). Gish feels like hurtling through wildly energetic dreams when deep in REM, switching to a dreamier, hazier place during the lighter moments of a sleep cycle. It’s RAWK! And … stroll.  Pre-Siamese Dream (which is simply an epic, beautiful album in itself), you can hear the psychedelic influences, sounds drenched in FX and that uniquely crafted guitar sound that makes them so distinctive.

Then, of course, there’s Billy’s voice – nasal but not grating, slightly feminine in the quiet moments, and growlingly masculine in others. He delivers his crafted, emotional lyrics with such conviction, you can’t help but become tangled in his musical vision. There are more key changes than a squatter’s front door, it’s muscular, floaty and the perfect stepping stone to ambitions and sounds getting bigger and being realised. The only downside (ironically) is that the closer, Daydream features D’arcy on vocals, accompanied by cello, violin and viola. Maybe more of these intimate moments would have steered the band in a different direction, but for now and forever, it’s a brilliant finish to a brilliant album.