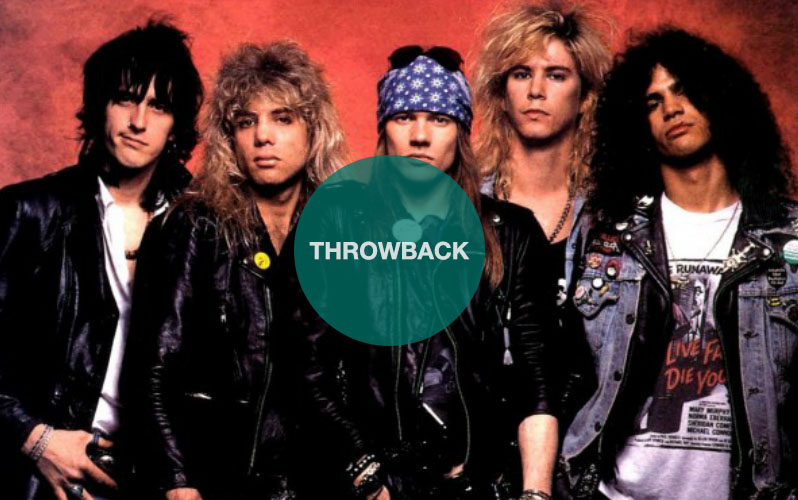 Appetite for hell? Highway to Destruction? We’re just musing on the news that Axl Rose is joining AC/DC on their U.S and European dates as a replacement for almost permanently deaf lead singer Brian Johnson. An Axl/DC mash up is pretty mind blowing for any rock fan, especially as Guns N Roses recently stormed Coachella, giving the EMD-centric fezzie a blast of middle-aged rock RAGE.

So, back to the beginning. Should we go for AC/DC or Guns N Roses as this week’s Spotify Throwback Thursday? It’s got to be Guns N Roses. BBC Four dropped ‘The Most Dangerous Band in the World: The Story of Guns N’ Roses’ doc in Feb, and it was pretty damn awesome, reminding us all (as if we needed it) that Appetite for Destruction (18 million copies sold in the U.S alone) is one of the best debuts, and BEST ALBUMS ever.

The line-up only lasted one album, howling, angry, unique (yet quietly intelligent and mega-ambitious) singer/songwriter Axl Rose, guitar legend Slash, Duff McKagan, Izzy Stradlin and Steven Adler. All amazing musicians, but with an appetite for their own destruction (Slash – half a gallon of vodka A DAY?). 1987 and MTV was a wee baby, with Hip Hop and the likes of GnR kicking the shit out of the charts. They simply had to be played, despite the safe hands approach of the corporate owners.

Welcome to the Jungle sets their stall out perfectly. An L.A band that played the strip, cut their teeth in dives and rose out of the ashes of two bands, Hollywood Rose and L.A Guns. A teased out riff with sirens blaring in the background, it builds…then the drums count us in to the drop. Welcome to the Jungle. We’ve got the fun and games…It chugs along like a hard rocking, denim and leather wearing biker on a Route 66 midnight journey. The structure is pure rock, but the solos and key changes are actually pretty innovative.

Take each element of the band and they all perform above and beyond the norm. It’s sexy, dramatic and leaves you salivating for the rest of the album. Not a bad opener, ‘It’s so Easy’ sees Axl’s natural baritone growl menacingly. The scream is saved for later. ‘Why don’t you just…fuck off?’ finishes what Roger Daltrey started in My Generation. My god. No wonder the moral majority were up in arms.

‘Nightrain’, loaded like a freight train. Feeling like an aeroplane. Hmmm. What could they be alluding to?  Rattlesnake suitcase under the arm, drinking gasoline. Steven Adler powers the drums, fully utilizing the bass drum, and all manner of percussion. Hammering out a rock steady beat as the rest of the band paint their anarchic masterpieces. ‘Out to get me’…paranoid much? ‘Mr Brownstone’ comes with nice fx with shuffling toms. One of the groovier cuts on the album that’s centred on a line that Izzy came up with and Axl developed. In fact, most of the album is formed of lyrics and ideas the band brought with them when they formed. It’s not, by far, the Axl and Slash show.

‘Paradise City’ THE Anthem. Lighters aloft please. We love the sped up race to the end that just sounds like an awesome jam session. ‘My Michelle’, slow and heavy wins the race. ‘Think About You’ is the closest thing to a power(ful) ballad on the album. The real, balls out ballad is obviously, THE BEST KARAOKE SONG EVER ‘Sweet Child ‘O Mine’. Not a lot to be said about this one.

‘You’re Crazy’ pitches it all back up to 5th gear, ‘Anything Goes’ and ‘Rocket Queen’ may be the lesser known tracks (hence end of album?) but rock no less than the rest. The rest, as they say is a well-documented, messy history.