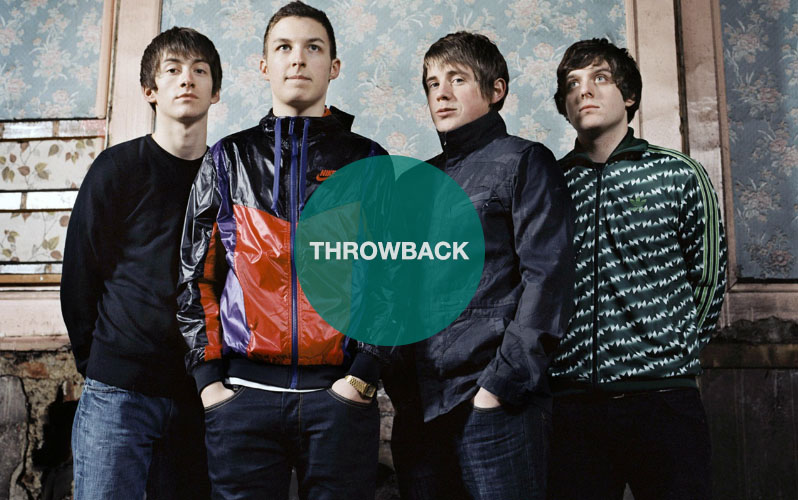 It’s been a tough year for losing musical icons. With the news last week of his purpleness, Prince having passed away, it left us feeling mighty blue. We would have loved to have done a Spotify Throwback, but, he’s not on there, and to be honest, we couldn’t have agreed on one of his albums to cover.

Instead, we’re going to celebrate. Arctic Monkeys debut album ‘Whatever People Say I Am, That’s What I’m Not’ is 10 years old this year back in January. Our Monkeys radar has been tickled recently through, as Helders (another fair-to-say legendary musician joining the one name canon) has worked with Josh Homme (again) and Iggy, on Mr Pop’s new album, and Alex is busy being a Last Shadow Puppet again with Miles Kane.

The album’s birth was very well documented and arrived at a time of a shifting musical industry. They did the ground work of giving out cd’s at gigs, publicising themselves wherever possible, and got a lot of attention because of MySpace (look it up, younger LOTInsiders).

They arrived almost preternaturally fully formed. Barely 20 years old, glibly playing down their musical talent and armed with a stack of socially incisive lyrics that reminded us again that Sheffield do kitchen-sink dramas pretty damn well, Alex Turner (guitar, lead vocals), Matt Helders (drums, backing vocals), Jamie Cook (guitar, backing vocals), Andy Nicholson (bass, backing vocals) were the real deal. It sounded like a raw mess, like a bunch of ingredients dumped on a table, but upon closer inspection they were tight as fook. Tunes careered through pop, ska riffs, metal, pop and rock in a handful of breathless minutes at a time. Post-Strokes, it’s what any rock fan was looking for, and we bought by the droves (5 x platinum).

Altogether, they’ve released 5 albums in 10 years. Strong work ethic, pretty much critic bulletproof and the aforementioned side-projects have come at times when, by any other band status, they would be citing ‘artistic differences’. It’s pretty hard not to fall in love with them from the opening, short drum fill. View from the Afternoon sounds like metal, all muscular riffing and sinewy bassline, then BAM, key change and you’re into a different completely song. This opener, a now indie rock classic, wears their bravura on their rolled-up-for-business sleeves.  It’s dynamic, weaves a wonderful narrative and the first person storytelling lets us into their world completely, making them sound utterly authentic. Oh, and it changes to a pumped ska riff halfway through. The goosebumps moment though, is at 2:18, where the jangly, discordant guitar line lures us back in for more mayhem.

‘I bet You Look Good On The Dance Floor’ rolls, builds, then thunders its way to a relentless stomper that’s almost punk, and my word, don’t they sound like they’re having fun.  ‘Dancing Shoes’ sounds almost afro-beaty, but settles into a groove that could be turned into disco, apart from the massive guitar solo of course. You sexy little swine.

The closer, ‘A Certain Romance’, is jaunty, positively upbeat sounding with Andy’s sweet bassline anchoring the tales of classic white Reeboks, and blokes with pool cues. Sheffield at that time for that age doesn’t sound particularly appealing (dahling), but they showed us and we stuck with them. Musical influences are distilled into this furiously fun and clever début that still stands the test of time.