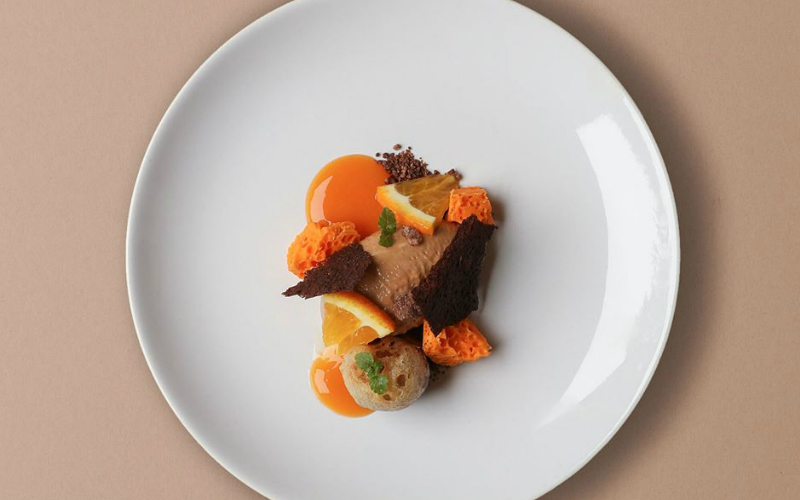 Scottish chef Nico Simeone already has restaurants in Glasgow, Edinburgh, Belfast, Manchester and Liverpool, and now he’s bought Six by Nico down to London, taking over the old Zizzi spot on Charlotte Street. Nico has made his name by serving an incredibly-good-value tasting menu – each restaurant serves a six-course menu, themed around a place or an idea (Orient Express, Chippie and Thai Street Food have all been past themes) which changes every six weeks.

The opening theme for each new restaurant is always ‘Chippie’, and London is no different, so if you get down there soon, this will be the menu on offer (until September 6th). Whatever the menu, the price is always the same: £35 and with the wine pairing coming in at £33 – not bad value for six dishes at all. There’s also a selection of snacks you can have for an extra £5 – if you do this, just get one to share as it’s plenty of food, especially when you have six more courses coming up.

First up on the menu is “Chips and Cheese” a salt cod croquette with parmesan foam, brown sauce, and a vinegar powder that hits the back of your throat while it’s still a foot away from your face – albeit delicious, even if you get a few looks for a suspicious cough… Next up there’s “scampi”, which is slightly more self explanatory, although here it’s made with monkfish cheek, and served with gribiche and beurre blanc.

There’s room for meat courses too, while not straying too far from the chippie theme. There’s a mini steak pie made with beef shin and served with a burnt onion ketchup, as well as “smoked sausage” which turns out to be a pretty plate of three cuts of pork along with black pudding, apple and celeriac.

The main fish course is Shetland cod with confit fennel, samphire beer emulsion and pickled mussels – but where’s the chips?! The dessert is a deep-fried mars bar, which is actually rather disappointingly a chocolate mousse, deep fried dough ball, and blood orange sorbet. Tasty all the same but we’d of been happy with a mini Mars deep-fried.

Overall we had very few complaints about the food at Six by Nico. It is really very good value for £35. The worst thing about the place is the music which was the worst kind of daytime radio schmaltz – an easy enough thing to fix though, so here’s hoping they do soon!