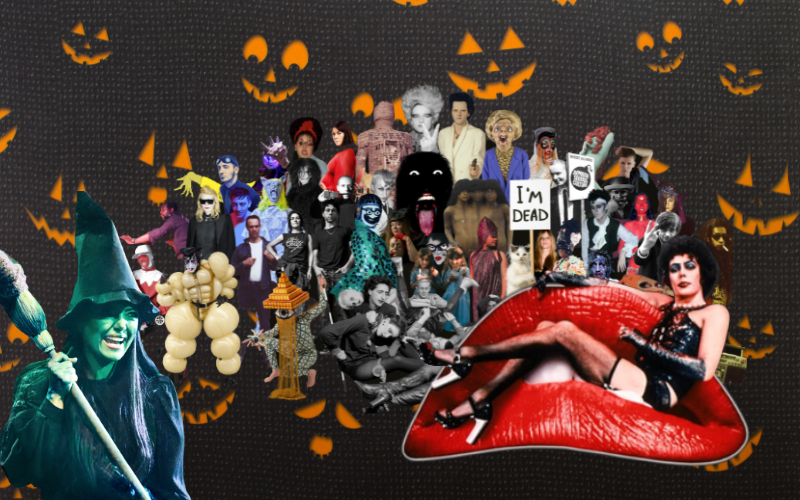 It’s time to crack out the fancy dress and scoff everything pumpkin spice flavour because Halloween is fast approaching. From a British horror exhibition to a ghoulish illuminated trail to Huns-themed ball, here’s how to make your Halloween spook-tacular rather than a total nightmare.

Beavertown is taking over Flat Iron Square and turning it into a nautical space nightmare, inspired by the brewery’s reimagining of the Rime of the Ancient Mariner, covering in bioluminescent seaweed and intergalactic tentacles. As well as live DJs and performances, there’ll be plenty of beer on hand, including Beavertown’s bright red Blood of the Mariner Lager. It’s FREE entry and fancy dress is encouraged.

Robin Gill is bringing his infamous late-night Blood Shot Supper Club this October and he’s making it a real night to remember with a Rocky Horror theme. There’ll be four courses cooked up by Robin and some of his chef pals, served with paired drinks, DJs, entertainment and one or two scares well into the wee hours – it is Halloween after all. And yes, you’ll need to dust off your best fancy dress.

The Horror Show! at Somerset House

Punks, witches, subversive icons and ghostly figures will be haunting Somerset House, and just in time for Halloween, as The Horror Show! looks back over 50 years of British counter-culture. The landmark exhibition will explore the UK’s alternative history in three acts – Monster, Ghost and Witch – using horror archetypes to examine defining eras and make sense of the uncanny. The collection will bring together over 200 artworks by key players and culturally significant objects from the past five decades. Featured artists are set to include Jamie Reid, Pam Hogg, Leigh Bowery, Noel Fielding, Derek Jarman, Harminder Judge, Zadie Xa and Tai Shani, among many others.

It’s getting spooky after dark at Chiswick House & Gardens as an illuminated Halloween trail is coming to the 18th-century property, featuring a statue avenue, demon trees, a haunted graveyard, neon spiders, grinning pumpkins and a witch’s lair. Live actors and fire performers will be bringing the scares and once you’ve made it round, you can warm up with hot toddies and toasted marshmallows around the fire bowls.

Looking for the perfect pumpkin to carve this Halloween? Gourd news, Covent Garden has you covered. Yes, the Halloween Pumpkin Market is back with a seasonal floral display and over 200 pumpkins and squashes of all different shapes and sizes available to buy.

It’s a Halloween classic and this year you can watch Hocus Pocus in style, on both a big screen and with a live orchestra performing John Debney’s score. The film stars Bette Midler, Sarah Jessica Parker and Kathy Najimy as three witches who are accidentally bought back to life in Salem on Halloween and attempt to steal the life essence from the town’s children to gain eternal life, with Max, his girlfriend Allison, his sister Dani, and boy-turned-cat Thackery Binx trying to stop them.

All you Halloween hunnays, dig out your best fancy dress and shimmy on down to Colours Hoxton for Hunsnet’s Halloween Huncy Dress Ball. Not only will it be the spookeh-ist event of the season, there’ll be a cash prize for the best dressed, so you defo want to go full hun for this one.

Cocktail bar Discount Suit Company have teamed up with The Jack Ripper Tour to bring a one-off walk for Halloween. Starting at DSC, you’ll get some hot punch before heading off on a spine-tingling tour of Whitechapel and Spitalfields, the infamous stalking grounds of Jack the Ripper. The tour will end back at DSC where guests who’ve booked a table will get an exclusive 25% discount off their entire bill – so there’ll be no scares there.

At Your Beat’s weekly Body Party class is getting a Halloween makeover with a spesh session soundtracked by spooky tunes. Fancy dress is highly encouraged and there’ll be cauldrons filled with juices and themed snacks to complete the Halloween vibes.

This Halloween, take an especially spooky tour of Theatre Royal Drury Lane, one of the world’s most haunted theatres. You’ll be told hidden tales of scandal, conspiracy and ghostly figures – and you may even catch a glimpse of The Lane’s famous Man in Grey. Luckily, you’ll be able to summon up some courage with a cocktail in the Cecil Beaton Bar before setting off.

This year, The Standard hotel is teaming up with legendary makeup artist Isamaya Ffrench for their Halloween party. The Night Riders from Hell will be taking over Decimo on the 10th floor (accessible via the iconic red pill lift) for a night of special guests, breathtaking looks designed by the ISAMAYA Beauty team and killer performances.