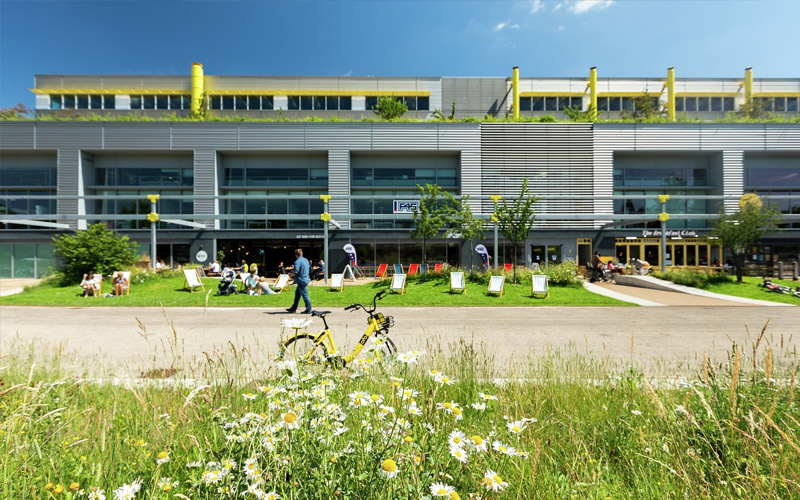 Since the end of the Olympic Games in 2012, Hackney Wick has been (and still is being) totally transformed. The overground station has had a complete revamp, a whole new residential community has sprung up and it’s a become a hub for work and playtime. One of the biggest developments in that time has been Here East, on the site of the former Press and Broadcasting Centre. On Canalside you can grab breakfast, work out, get a hair cut, stop for a coffee, have dinner and even play a round or two of Tekken. Say hello to Canalside on Here East…

If you’re looking to keep it clean then plant-based and organic cafe MOTHER is the place. Everything is made from scratch, from the baked goods on the counter, to the brekkie dishes of avo on toast and acai bowls, to the sarnies, salads and soups on offer at lunchtime. The menu expands on the weekends meaning you can get vegan burgers, nachos and bagels as well as breakfast all day long. MOTHER really does care about the planet too by making the space as eco-friendly as possible. There’s a zero-waste store inside the cafe, they use recyclable packaging and you get discounts if you bring in the glass bottles used to store their cold-pressed juices back in.

Gotto Trattoria, the rustic sister restaurant to Soho’s Mele e Pere, is all about simple and tasty family-style Italian food. With al fresco tables that overlook the canal, a super light and airy interior, and vermouth on tap, you could easily believe you were on the Italian – rather than the Hackney – Riviera. Gotto serves up a daily changing menu of antipasti, pizza and pasta, which you can pair with craft beer, Italian wines or one (or two) of their excellent spritzes.

The Breakfast Club has grown into quite the empire with ten sites in London. The Hackney Wick branch, one of the biggest, pays homage to the original D’Arblay Street, Soho venue with old school vintage furniture, reclaimed 70’s wallpaper and retro lighting. All the BC classics are present and correct; stacks of fluffy pancakes, Mexican eggs, the Full Monty fry up, smashed avo on rye and more. And in case you don’t want breakfast for your lunch or your dinner, you can get stuck into the likes fried chicken & waffles, steak & chips and disco fries. Basically, you’ll not be going hungry here.

It’s absolutely huge in Australia and now F45 is a craze over here too, with studios all over town, because those who go swear by it. It’s a pretty simple concept; there are 36 varieties of 45-minute, high-intensity circuit workouts (mainly cardio or resistance based) with a different class on offer every day. There’s enough variation to keep you from getting bored and because you train as a team, you can help push each other. The workouts are intense, so be prepared to sweat, but they’re also very effective.

Bucks Barbers has been providing fresh trims to the people of East London since 2013 and the Here East branch has the same good vibes that made the original Hoxton shop so popular. Friendly service, a walk-in policy, free beer whilst you’re in the chair, and of course, quality hair cuts and beard shape-ups…it’s not hard to see why people keep coming back.

After killing it on the street food circuit, Here East became the first permanent location for Randy’s Wing Bar. Naturally wings are the thing here; from extra hot buffalo to sweet and sticky Gangnam to grilled harissa-infused Casablanca, there’s a wing to suit everyone. Randy’s hasn’t stopped there though as it also serves up chicken strips, burgers, loaded fries and more. From all-you-can-eat Mondays to live music on Hennessy Blues Thursdays you’re never short of action at the wing bar. Cluck yeah.

Four Quarters is the place you can unleash your inner child. It has retro arcade classics like Pac Man and Frogger to the Sega and Nintendo games you grew up playing in your bedroom, with the addition of craft beer and cocktails. The games bar has really gone to town with the theme – you can refuel in between rounds of Street Fighter with Ninja Turtle-inspired pizzas and bevs like the rum, cinnamon & blood orange Hadouken and Luigi’s Limoncello Margarita.

On top of all that, Here East is also a digital and creative campus. It’s the UK’s largest start-up incubator, it’s home to research centres and creative studios, and it’s a place of innovation. There’s so much to experience at Here East, get along and see for yourself.