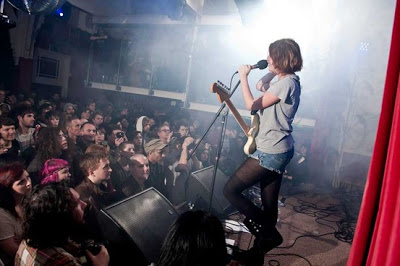 Let me open by saying this was the best gig I’ve seen this year and although it’s only February I’m going to go out on a limb and say this will be the best gig I’ve seen throughout the whole of 2011. Frankly if I didn’t see another gig for the rest of the year it simply wouldn’t matter, I’ve already seen the best. (Note: I may take all that back when Death From Above 1979 make their long awaited return in May)

Tonight’s support comes in the form of Twin Shadow; an upbeat indie/electro outfit we’d not heard of before but were pleasantly surprised by. Definitely for fans of TV On The Radio, and those who like challenging music that still makes them dance. We’ll be keeping a close eye on these guys in the coming 12 months.

At around 9.30pm four beautiful women by the name of Warpaint took to the stage and hypnotised us with their kaleidoscopic rhythms. For the next hour or so (which seemed to fly right by) the capacity crowd was completely captivated, no pushing or shoving that you get down the front with most gigs just stunned, sill, silence as people soaked up every last swirling beat and perfect harmony.

In a world dominated by men (especially the psych genre) Warpaint are a breath of fresh air. They don’t conform to standard song structure, time signatures or three and a half minute radio friendly tracks, instead choosing to ‘freestyle’ and simply enjoy themselves; the four of them locking into deep grooves onstage coupled with the lava lamp/kaleidoscope projections make the whole set seem like an entirely pleasurable acid trip.

All the favourites from LondOnTheInside’s best album of 2010, their glorious debut LP ‘The Fool’ are played including ‘Undertow’, ‘Composure’ and ‘Set Your Arms Down’. The crowd is also treated to a selection of tracks from the bands ‘Exquisite Corpse’ EP including ‘Elephants’ and the ever haunting ‘Billie Holiday’.

This is not the first time we have seen Warpaint, and it will not be the last. If you have not yet had the pleasure then what are you waiting for? At best go and buy the record! They simply put are the best and most individual thing currently happening in modern music.